So it all started when I got this car, my dad told me if I left it with him and his friend they would put all new speakers in it and a new stereo and amp and subwoofer for me. I let him have it and from what I was told they took the stereo out without disconnecting the battery. They disconnected the battery later and reconnected it, but the terminals were not terminals that could be tightened again so they were loose on the battery posts. They never finished the work and I got my car back with lose terminals and used it like that for 2 - 3 days I would have to go in the trunk and wiggle the terminals to start the car. One day I had a really hard time starting it and I had a friend come wiggle the terminals while I tried to start it and I was about to give up when I heard a super high pitch beep coming from somewhere in the car and I got in and it started and I took it home and it has not started since. I’ve had the starter rebuilt I’ve put on new terminals I got a new battery i got a ECU and control moduel from pick and pull yesterday and I just can’t figure out what is wrong with this car. And the problems keep changing. When I turn the key nothing happens no fuel pump or anything before when it first quit working back in August all my dash lights worked and my headlights and blinkers work but the info display said I had no gas when I know it had half a tank and the gas gauge wouldn’t move. Then after a while of trying to get it working the dash lights quit working and only the security light I assume comes on (car with a lock symbol) now for some reason some fuses in the fuse box aren’t getting power and I have no idea why. When I put the new ecu in the gas gauge moved and showed half a tank.

TLDR: 2008 Chevy Cobalt no crank/start I’m by no means a mechanic, everything I know about cars I learned with this car (my first car) that lasted me 3 weeks so let me know what information you need and I’ll get it to you

Right now you are just changing parts with no real data to direct younto the actual problem. To compound things you are swapping unknown parts with stuff from the junkyard. You will not fix the car with this technique as you have now found.

Not to insult you but clearly you don’t have the skills or tools to fix the car. Given that, I don’t think I can walk you through the diagnostic process need to fix this car. I would strongly suggest taking the car to an actual mechanic. Preferrably one that likes an electrical challange.

Good Luck and don’t let your dad mess with your car again.

Everything that I have replaced has moved the car in the right direction. The starter that I had rebuilt was bad, and after replacing the ECU the gas gauge would move and it wouldn’t say I was out of gas like it did before. Not everybody has money to be able to afford a mechanic, I am here because i make around 260 every 2 weeks, it would cost me around 200 just to get it to the mechanic then after they fix it it’s gonna sit there forever because there is no way I can afford a mechanic bill when I’m trying to support a family of 6. Nothing I have done to the car is random I did research on research on research to figure out the issues and have had countless people look at the car and give me leads on what the issue is.

I suggest removing the new stereo and sub woofer , sell them and use the money to get this thing running . Mustang is correct , just throwing parts at this thing is a waste of money.

Many of the things you did may have made a difference in how the car has reacted, but that doesn’t mean the initial problems were fixed. You have missed some very important first steps in diagnosing. With everything that has been done to this car now has made it extremely difficult if not impossible to resolve on a forum. You need a hands on person to look at this thing. Someone with the knowledge to diagnose electrical.

Then that goes back to the initial issue. I’m broke, to get someone with knowledge to look at it costs money a lot of it. I can spend 70 dollars to get a starter rebuilt or 40 for a ECU from pick and pull but I can’t pay 1000s to have a professional fix it

To reset it, you need to stick the key in, turn it to start,hold it there for about 1 second, let the key sit in the ON position for 10 minutes, the security light will start to blink. Turn the key back to OFF, and then turn it and it should start right up.

If not try it with your other key, if that don’t work, it will need to get towed to the dealer to get the keys reprogrammed to the computer.

I tried something similar to this, I’ll try it that way when I can get to the car later today

Many cars use a special feed wire called a fusible link. Sometimes, those are separate parts but sometimes, they are built into a special wire. The key to figuring this out is to trace the specific circuit from the battery back to the fuse panel and look for the blown or broken connection. A wiring diagram and a simple volt meter would be enough to figure it out. Let me see if I can find the correct wiring diagram anywhere. If you lived nearby, you’re the kind of guy I would go out of my way to come over and help. Some dude busting can to provide for his family and needs some help. Kudos man…

See, like this diagram I found on Autozone’s web site. Look at the top, there is an inline fuse on the right feeding the PCM and a couple of inline fuses for other circuits- 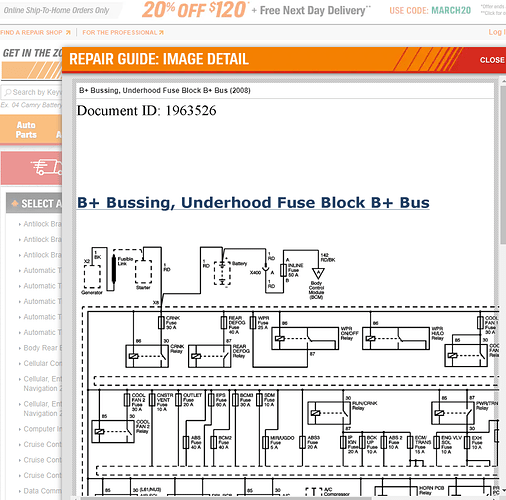 I appreciate the help. Yeah I’m getting to the point where if I don’t figure something out soon I’m gonna get it towed to a shop and just do payments on the bill. I gotta go to work soon so tomorrow I’ll see if I can get out to my car and figure anything out