I am considering buying a 2007 Mazda 6, 4 door sedan, 2.3L, with 56,740 miles. Two out of 5 mechanics I contacted for an opinion told me to stay away from Mazdas. One said to “run” away from the 2.3 L engine model because it starts leaking at around 80K miles and the engine goes bad. The other stopped working on Mazdas after problems with defective parts. I am looking for advice. I kind of like the car but I am afraid of getting a lemon.
Thanks!

Get it inspected, and if it clears inspection, you should be fine.

This is the same basic engine and transmission as used on the Ford Fusion (though the Fusion changed transmissions in 2010) - and the Fusion was rated the most reliable midsize sedan by Consumer Reports. Mazda, in the meantime, was named around the 2007-2008 timeframe to be the most reliable car brand in the world according to Warranty Direct, a third party aftermarket warranty provider, based on their claims data.

The ONLY oil leak problems I’ve ever heard of on the 2.3L have been from the oil filter, which is a cartridge based replacement, not a spin-on (this changed mid 2010 MY). Those tend to leak if you don’t use the proper wrench on the casing, because using the improper tool stresses the cartridge unevenly, and causes it to bend or crack, thus leading to oil leaks.

The mechanic that stopped working on Mazdas because of defective parts was likely having problems with aftermarket replacement parts not lasting, not OEM parts - because a dealer wouldn’t stop working on their own brand, and most mechanics use aftermarket whenever possible. Since he was on the hook for the cost of many of those premature failures, he probably found it easier to just stop servicing them. The alternative of switching to OEM parts likely would have pushed his costs nearly as high as the dealer, which would lead him to too much lost business.

I think those mechanics are smokin’ something. The '07 Mazda 6 (and most all years) have excellent repair records, including ‘engine major’ and ‘engine minor’ on Consumer reports. I’d have no more concern on this than on any used car.

Though mechanics are excellent sources of technical information in general, their opinion of car reliability is skewed by their small sample and the fact that they are often working on the cars that do have problems. They seldom do lots of repair work on cars that belong to satisfied owners. So I’m with eraser1998 on this one on his general assessment. .

Thank you so much for your comments!

the only way you’d get a “lemon” would be if the previous owner neglected maintenance on it. I’m not sure if the 4cyl has a belt or a chain on it, but if it has a belt, price getting it changed. It’s going on 5 years, which is pretty close to where some manufacturers recommend changing them based on time.
If you want to convert to the spin-on type, they sell conversion kits for it 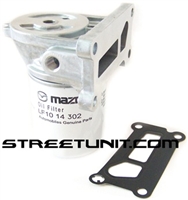 Remove the stock cartridge style oil fiter and replace it with a Spin On Style Oil Filter. Use the spin on filter to attach a sandwich plate adapter for a very easy way to install an oil pressure gauge onto your Mazda 3!

It’s a chain… the same engine is also called the Ford Duratec 23, and by definition, any engine Ford labels a Duratec has a timing chain.

good, then that’s one less bill the OP will have to worry about, should they buy it.

Thank you everyone for your input. I had it inspected and decided to buy it.

let me be one of the first to welcome you to the Mazda family then.

I’ll be the second. I can’t make claims about the reliability of our Mazda6, since its only a year old, but it makes our 98 Camry seem like the crudest, most unrefined, sloppiest-handling vehicle around by comparison… and those Camrys weren’t bad vehicles.

As a 2004 Mazda6 owner (v6 5 door), I can say it’s a great car to drive, handles well, etc. Have had some serious and what appear to be common issues though, including engine/pre-cat replacement at 81k, failed display for climate control/stereo, various annoying rattles and squeaks, and a few other things. Nevertheless, I am keeping it. Having driven Toyotas I can not imagine being chained to one on a daily basis.