Some reason when its really cold say 15 F to about -20 F (-12.2 C to -26 C) the engine temp gauge on the dash doesnt move after driving for awhile, at all compleltely dead. This spring and summer I’ve had no issues; gauge works fine.

It’s on my winter beater that I use sometimes during spring summer and fall just to keep fluids going, So it’s mostly droven with a dead sensor in winter

So now winter is on the horizon, is my temp gauge just freezing stuck? I mean, I feel like once the engine is hot during the winter it should wake up but doesn’t.

Is it necessary to have during the winter time?
Or can I be a degenerate in a beater w/ no temp gauge?

Is it necessary to have during the winter time?

How do you know the gauge is accurate? In cold weather, does the engine warm up to 190 degrees or so? Same in the summer?

If you have not tested the coolant temp with another form of thermometer, you don’t know if the engine is actually warming up. If it isn’t the thermostat is bad. If it is, the temp sensor is bad. The sensor is cheap, replace it. There may be 2, one for the ECU, one for the gauge.

The gauge acts normal in the summer. Just could tempatures it gets stuck or something like that.

for the 2 parts your recommending me to replace im looking at (guessing links arent allowed so)
temp gauge itself but cant find a part for the other thing your talking about.

for the 2 parts your recommending me to replace

How do you know the gauge is accurate? In cold weather, does the engine warm up to 190 degrees or so? Same in the summer?

If you have not tested the coolant temp with another form of thermometer, you don’t know if the engine is actually warming up.

But you didn’t answer the questions, you went straight to throwing parts at the problem knowing nothing about the actual problem. I see you posted the part number of the thermostat. Couldn’t hurt to change it but it may not be the problem. The coolant temperature sensor is this;

This is for the 2.4 L NA engine. I don’t know what engine you have because you didn’t tell me so it might be this or another.

Very likely the thermostat is leaking through the poppet seal.

For engine light codes im getting

(Which is probably both codes for the canister since im having rough starts after fueling) and since sensor is alright its not throwing anything.

However, I suppose as everyone said I should figure out and replace it, and i dont have a heated garage for when it will trigger. Should i just replace the sensors and cross fingers since $15 buck risk?

I do recall during a oil change during the winter a mechanic did note he saw little bit of coolant fluid near the lines where it connects to the transmission. I can find the part since i wrote it down at the computer at home. Since your talking about something leaking.

Just to jump in, I’ve got ten bucks that says your gauge is not freezing. Your thermostat could be faulty and never closing to allow the engine to warm up in cold weather.

I don’t know about your engine but mine ha two coolant sensors. One coolant sensor fed information to the gauge. The othe engine temp sensor feeds information to the computer to regulate fuel management. They look the same except for the connectors. I suggest just going to Napa to sort it out if you are going to try and replace the one feeding the gauge. But your car may be different.

Still I think you have an old stuck thermostat. Refunds for faulty advice will be promptly sent.

Since your talking about something leaking.

When a thermostat leaks, the coolant goes into the radiator when it should remain in the engine. You won’t see the leak.

This is a thermostat with a failed poppet seal; 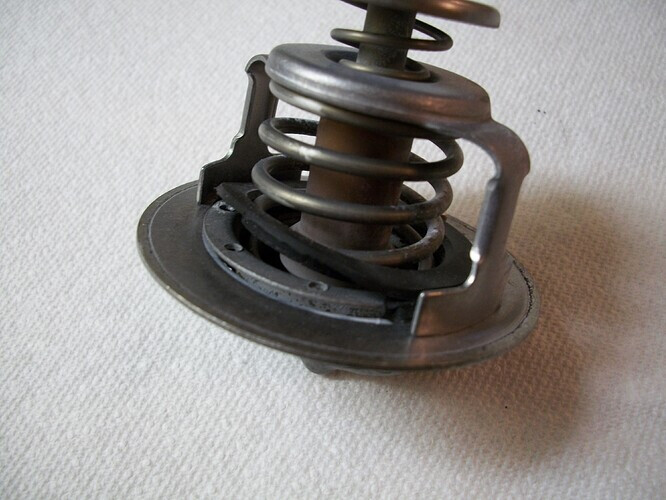 Your thermostat could be faulty and never closing to allow the engine to warm up in cold weather.

+1
And, if the engine never fully warms-up, that means it is running on a richer-than-normal mixture. In addition to using more gas, this could potentially lead to gasoline contamination of the engine oil–a wear and tear issue.

I don’t usually suggest throwing parts at a problem, but this situation seems to be a fairly obvious case of a thermostat that is stuck open/leaking.

figured this was gonna be a common GM problem just like evap’s in almost all my GM cars so far sooner or later died.

Just was hoping I didn’t have to gamble and throw parts at it since its a seasonal problem for it to open/close.

appreciate everyone here so much for the education <3!

Thermostats are a maintenance item not a repair. They’d get changed every year in the old days.

As @bing pointed out, your vehicle may have two different sensors for the engine temperature reading. If there are two sensors, you most likely are not going to see an error code show up for the dash gauge issue. Since this issue seems to happen only in the real cold temperatures my biggest suspect for the problem would be a faulty wire connection to the sensor itself. I doubt the sensor is bad, you could verify that by removing the connection to the sensor when the engine is hot and check the resistance of the sensor from the connection point on it and ground. Most sensors read a lower resistance as the engine gets warmer. It depends on what type yours is. If the sensor resistance is okay while the problem is happening that means the trouble is either in the wiring or the power to gauge and the sensor. Since the trouble happens in the cold, I would suspect the problem is somewhere in the wiring located under the hood. Where the cold air can act on the wiring, and not inside the cab where the temperature is pretty constant.

GM seems to have had some problems with it’s dashboard gauges on vehicles that use electronic actuators (a type of electrical motor) to move the gauge needle. I’m guessing that’s the most likely cause of problem w/your dysfunctional coolant-temp dashboard gauge. The best solution is to replace or repair all the dash gauges at the same time, b/c the other’s will likely fail too.

Why Chevrolet and GM gauges go out all the time

This page outlines all the reasons these Chevy/GM gauges keep going out on Silverados and basically all GMs from 03-06...