So lately I have noticed a noise while accelerating, it typically sounds almost like something is vibrating. It sounds like it definitely has to do with the exhaust system, but have checked the muffler and other than a small bit of rust it looks fine. As well, I have recently started to get check engine lights on and off. Not a blinking light or anything, but a solid check engine, that eventually turns off. I just had it at the mechanic who ran a fuel pressure test, MAF clean, vacuum check and his only suggestion was a carbon cleaning which I did.

Now I have another constant check engine light and my acceleration seems to be affected some what and it seems I have to hit the pedal more than normal which results in a louder vibrating noise.

Any ideas what this could be? I was thinking the cat, but not completely sure.

All responses are much appreciated.

How many miles on it?? Get the OBD codes read and post them here, then we’ll talk. Anything else is a guess.

I’ll get partsource to run a code scanner tomorrow. My previous codes were EGR. Although ever since I filled up last I have a really bad chemical smell in the car. Not even sure how to describe it. Not coolant, oil or brakes. Just a chemical smell that makes me almost sick.

Could that smell be a/c refrigerant?

I don’t think so. I have smelled that before and this one kind of smells more like a petrol fume, just not gas as a whole. My girlfriend works in the auto salvage business and she mentioned that it smelled like ethanol.

Not sure if a fuel being to rich in ethanol would cause a acceleration and check engine light though.

Not sure if a fuel being to rich in ethanol would cause a acceleration and check engine light though.

Any chance you put E-85 in the last time you fueled ?

Nope. Just Costco regular fuel. Might have to throw some premium in to see if it makes a difference. I actually have had two check engine lights come on after fuelling at this particular costco though. Pump does say contains 10% ethanol

Might have to throw some premium in to see if it makes a difference.

That will not make a difference unless the engine actually requires high-test gas, and I don’t believe that this model requires anything other than unleaded regular. As was already stated, until you post the OBD codes, everything will be a guess.

Please post tha actual code in the form Pxxxx, not just the description.

The 3.4 motor is known to have egr issues. You then get the tcs disabled due to egr code. 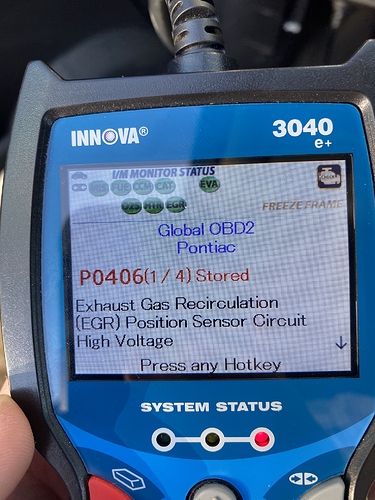 Others were a P01404 & P0404. I think it know what the issue is. The previous owner had replaced the wiring harness for the EGR, and the wires are just wrapped in electrical tape. Have a feeling there is a loose wire.