Just bought 2001 s40 with 88k miles. Transmission is smooth but when I checked the dipstick the fluid color is a kind of dark. I was thinking of changing it. Here are my questions/doubts:

1. The fluid is ATF Dexron III and Mercon oil. Right? What is the best brand to use? Castrol?

but in the haynes manual, it mentioned that:

transmission fluid does not usually need to be changed unless the car is used as taxi ( then it needs to be changed every 40k miles or so). Because of this, i think i can change it anytime. am i right?

Although I’m just reading this now, I would like to point out that if your transmission is running find - DO NOT touch the trans fluid!!! Secondly, the off-the-shelf trans fluids are abrasive to Volvo transmissions.

Your transmission wears over time, and lifetime trans fluid (like the fluid in your S40) is designed to compensate for the wear. As a matter of fact, it actually utilizes the debris and grime that builds up in the trans. If you flush or change out the fluid, you then deprive the transmission. How do I know this? I went against the advice and replaced the trans fluid on my 2000 S40. About 3 or 4 months down the road, I had big problems. Lets just say it has never worked the same, and it’s getting worse by the week. I am now faced with the decision to replace the trans (Volvo tranny’s run about 3 or 4 grand) or get a new car.

Even at the time I changed the fluid, every Volvo specialist I talked to said “Don’t do it!!” I just thought they were full of it… it didn’t make sense to me either - why NOT change the fluid? It looks dirty, right? I really hope you didn’t go through with this!

The OP did not tell us if the trans fluid has ever been changed on this 8 year old car, but I surmise that it has not. In that case, it should definitely be changed–but NOT flushed.

As to the preceding comment, I am going to compare that person’s situation to the patient who dies on the operating table during a Quadruple Cardiac Bypass operation. That patient would have died if he did not have surgery, and was unfortunate enough to die during the surgery that was necessitated by his poor health. Both instances of death would have been as a result of him not maintaining his health properly for the preceding X number of years. In other words, that surgery may give the patient a few more years, but it cannot be counted on to overcome years of neglect of one’s diet and exercise regimen.

When the person above changed the fluid on his 2000 S40, it was likely very much overdue, and as a result, the trans would have failed anyway. This type of “Hail Mary” servicing of an older transmission rarely works.

What does work is changing the fluid (and filter if so equipped) every 3 yrs/30k miles. People who follow that type of schedule rarely experience transmission problems. When trans fluid is not changed on that type of schedule, whether the fluid is first changed after many years of not being changed or whether the fluid is left alone, the trans is going to fail–usually anywhere between 90k miles and 140k miles. Such is the price of neglect.

I’m with VDCdriver on this one.

If there is something sensitive with Volvo transmission changes, I’d welcome hearing Transman’s input on it.

While I’ve only rebuilt about 5 auto transmissions (and that was 30 years ago), I’ve never heard of a transmission utilizing the debris and grime buildup - as if it were a good thing.

I did change the transmission fluid; drain and refill. It only took 3.5 quarts vs 8-9 quarts the repair manual said. Most of fluid are still in the gear (?).

I decided to change after consulting with a friend of mine who teaches auto mechanics at local college.

so far it is ok. i used mobil one synthetics atf. I was planning to do another drain and refill again soon to clean up more of the fluid. so far, transmission is working as before if not smoother ( it may be just psycological since i changed the fluid).

I have not checked the current fluid ( after it mixes with old ones in the gear) because i do not have time yet.

somebody told me that if you start to have some issues with transmission, best way is to flush and refill with originial type of atf or synthetics. maybe add some additives like Xado to improve metal to metal friction. Not sure if it works.

It is OK that your drain-and-refill only takes 3.5 quarts while the whole transmission takes much more. If you do that every 30k-40k you’ll be fine.

Here is more explanation on why some do not recommend changing transmission oil.

my guy ( who is teaching auto mechanics at local community college) explains as follows:

i will drain and fill every 20-30k miles since i do it myself the atf cost is minimal.

I know you’re only passing along the input that your mechanic is telling you, but there is little hope of trying to convince anyone on this forum on reasons why transmission fluid should not be changed.

I recently bought a 2005 Volvo S 40 with 175k on it. After heating up, the transmission slips a little and goes in to drive hard. I figure changing the transmission fluid will hopefully fix the issue. Whats everyones thought on this and did I waste $1100 on the car. Otherwise, its in great shape

I think you would have been better served by posting this before you handed over the $1,100.

I purchased the car because I watch a lot of shows where they buy older cars and fix them up. They ran in to a few problems where the transmission was slipping a little when it got hot and they ended up changing the fluid which fixed the issue, maybe I am hoping it fixes my issue. I purchased the car to use for the winter months to drive to my new job and I didn’t want to drive my BMW convertible in snow. Would I be better off leaving the fluid alone or drain a little and add Lucas or do a flush. I only plan on using the car a few months till I receive a company vehicle.

You bought car with issue.
Changing your fluid did not cause issue as you have not done it yet
2 different scenarios.
Shifts hard when hot. Something is worn?
Bad seal/o-ring? New fluid won’t fix worn parts

Most transmissions are neglected until they come a problem and then people get rid of them. Odds are the seller knew it had an issue before they sold it.
I would change the transmission and hope but keep in mind that changing the fluid is not always an answer for a problematic transmission.

Also, don’t put a lot of creedence into automotive TV shows. There’s a lot of creative editing and BS involved. One show I watched one time involved an allegedly bad starter motor on a Ford truck. They determined the starter WAS the problem without one minute of actual diagnosis. Then they slid under the Ford truck with a GM starter motor and all was well… ;-

Either mechanical, cosmetic . . . or both

a transmission fluid and filter service won’t be terribly expensive . . . but it likely won’t change anything

But it sounds like the car is still drivable, even so

Do the trans service . . . not a flush . . . and drive the car until the transmission drops out completely, then dump the car

The car is in excellent condition, new tires, starter, battery and no body damage. I have plans to drain the trans fluid, replace it and add Lucas and hope for best. 3 months is all I need and its all highway

If it turns out to be fine or reasonably fine after a fluid change have you considered just keeping it around for a backup car? I’ve always had one or two extras sitting around for those times when I have to service the main set of wheels or when something goes stupid.

For 1100 dollars I do not think you got hurt at all. Even if the transmission went completely out and you chose to go as far as installing another trans I think you are still ahead in the game considering what used cars are selling for; some with far more more miles and problems this one might have.

I will probably keep it around for winter use. If the tranny goes out, I definitley don’t want to put more in it that I paid for it although the motor is strong. I would sell it as a mechanics special. I didn’t buy the Volvo tranny fluid, they didn’t have it, the Mobile synthetic they had which I bought

Could be a internal solenoid which is gummed up also

Yes, I heard that also. I will have to cross that bridge if that is the issue. Monday, it goes in to the garage to get changed, 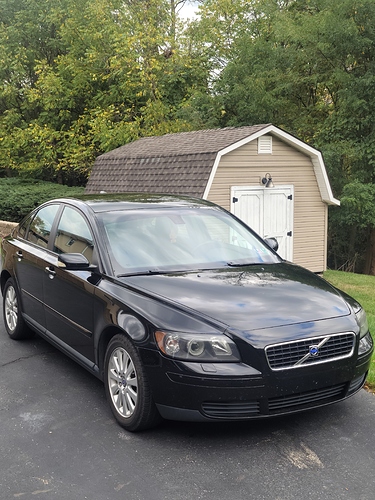