I’m trying to remove a windshield form my Volvo s-70. Is it held in with a rubber gasket or tube sealant? Are there any tricks to make this an easier job?
Thanks for the help.

They make this tool. 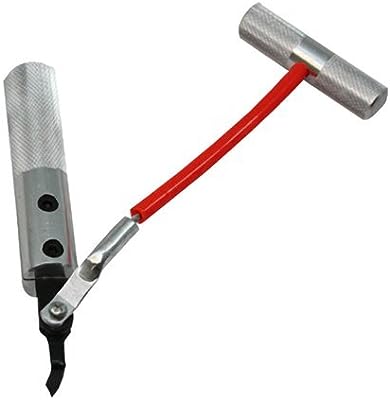 Glass Technology Windshield Removal Pull Knife, made from high quality aluminum. This auto glass cut out tool is machine to have a ergonomically design.  Nural design to prevent slipping during the cu ...

This is just a long handle with a razor blade attached at the end so the windshield seal can be cut from the inside at the bottom.

I don’t know of a windshield these days that is not held in place with tube sealant. A glass installer I know uses a reciprocating saw (Saws All or similar) with a blade that looks like sharp spatula to cut out the broken windshield. He can install most of them them in about 20 minutes. If you don’t have such a tool, good luck. Cutting one out with a piano wire, or Tester’s pull knife, in cold weather is not a job I’d want to even THINK about. Besides, the piano wire takes two guys. If you’ve not done this before, you may want to consider hiring someone who knows what they are doing.

I tend to agree with MGMcAnick. Sixteen year old rubber in wintertime is not going to give up easily.
Some jobs are much easier, and cost effective in the long run, just to let the pros do it. Windshield replacement is one of those jobs best farmed out.

Can’t imagine a shop would charge much to pull it off and especially if you need to re-use it again. Then duct tape it on for the ride home or you’ll be a block of ice.

Let the pros do it.
That sealant you refer to is more than just a sealant. It’s a bonding agent the integrity of which becomes a part of the overall crashworthiness of the vehicle, transferring force in an accident to the car’s unibody framework AND becoming a part of the operation of the airbag, holding it where it’ll do some good rather than allowing it to get pushed through the front by your head. If the windshield adhesive is incorrectly applied or cured, you compromise your safety substantially.

Another reason to let a pro do it is if they break the new one going in, it’s their problem. If you break it, you get to buy another new one.

Around here, $50 will get a salvage yard windshield installed at my location. $110 will get a brand new Chinese glass. I doubt that the installer pays more than $50 for it. He’s making a pretty good hourly wage.

Call some independent glass shops, if you have some in your area, and see what kind of deal you can get.