1999 toyota camry fans not coming on when they should

Just bought a 99 camry 4 cyl as a cheap beater car. I noticed when I’m idling the temperature gauge goes up all the way to hot but when i start driving it goes back down to normal. The last owner had the radiator replaced and I don’t see any visible coolant leaks. I tried looking under the hood for a long time after car gets to operating temp but the fans never turn on. However both fans turn on if I turn the AC on (not sure if only one is supposed to?) and both fans turn on and stay on if I unplug one of the connectors next to the drivers side radiator fan so I know the fans both physically work. What could be causing this issue. Also Would it be bad to constantly leave that connector unplugged so the fans are always on? Also i noticed if i’m idling and the temp gauge starts creeping up, turning the AC on brings it back down to normal

Check radiator fan relay #2 in the fuse box under the hood for proper operation.

The last owner had the radiator replaced

There should be a radiator fan switch in the lower radiator tank. If this was not transferred to the new radiator, the fans won’t switch on at temperature. 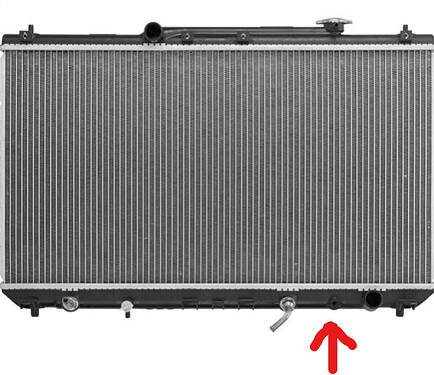 Yeah the temperature sensor or switch for the fans is in the bottom of the radiator and it is separate from the one (or two) where the coolant leaves the engine which are for the gauge and the ECU.

Try to avoid over heating an engine with an aluminum head and iron block. Changing the head gasket on that vehicle is more difficult than you would expect.

Just drove it on the highway for an hour and the temperature gauge dropped to almost cold for most of the trip. Not sure if that eliminates or points to anything. Now i’m parked in my driveway and i’ve been idling for 10 minutes now and the problem seems gone…temp gauge went back up right to the middle idling here but it’s stayed there for over 10 minutes now and not overheating. Now I’m almost think thermostat is bad but i’ll have to try those other things

Yes the thermostat is bad in addition to whatever is supposed to turn on the fans. If you change the water pump on that along with the timing belt don’t use a Gates water pump. The fail at 50k miles. If you do, drill a weep hole in the bottom. They put the weep hole at the top so the section between the seal and bearing fills with water before overflowing out the top.

drill a weep hole in the bottom.

Don’t listen to this guy…

If they didn’t, the seal in the water pump would blow out when the coolant got hot… 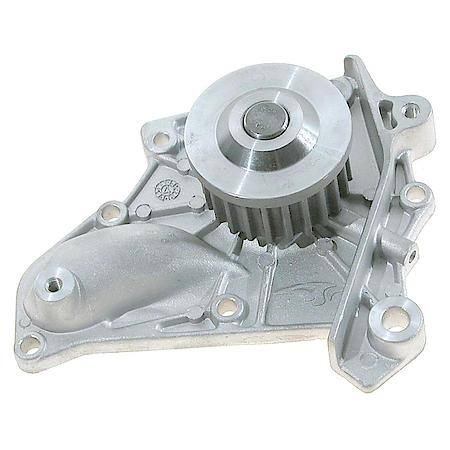 See that hole to the right of the image?

I assume you meant to drill a small orifice in the thermostat, not a “weep hole” in the water pump. It is an accepted “trick” to drill a small (1/16" to 1/8") orifice in the thermostat in order to aid in air removal, and to prevent the situation where air becomes trapped behind a closed thermostat, leading to overheating which can stress the head gasket. It is NOT acceptable to drill any holes in a water pump/housing, and this would result in leaks for sure.

BTW, some thermostats have an orifice from the factory, often with a “jiggle valve” built in. For example, the stock thermostat used in the 2003-2004 Toyota Corolla.

Coolant temp goes to near “cold” when driving car? Not supposed to do that, could a problem with the engine-thermostat stuck in the open position. Fans not coming on likely problem with engine coolant temperature switch. Switch has moving parts, not robust. I’ve had to replace that switch several times on my Corolla, symptom when it breaks is engine overheats at idle, fans don’t turn on. If switch is unplugged, fans always on. It’s a feature to prevent overheating if connector fails. Fans on all the time won’t cause any immediate problems, but will cause a drop in mpg, and eventually fans will fail from overuse. Possible alternator problems too. Suggest to try replacing both engine thermostat and engine coolant temp switch.

You guys read about two sentences of my already short post and then respond. I was just warning about the badly designed Gates water pumps that often get put on those Toyotas. Mine seized at 45k miles.

Thanks for the tip about drilling an orifice in the thermostat. IS the lack of that hole why you have to disconnect a coolant hose at the top to let air out while filling with coolant on some vehicles?

Not entirely sure, but I’ve heard tale that hole in the thermostat helps keep air pockets out of cooling system. Home water heater have a “dip tube”, function is to force incoming cold water down to the bottom of the tank. Those dip tubes often have small holes about 1/3 of the way down. I’m guessing for similar reasons.

if it is the 2.0 LITRE look near the back left side of engine bay and there will be a box with a lid it has fusees n relays and slot of other crap on the lid inside is a diagram find the relay that may be causing this there is 2 relays for the fans 1 for cooling engine and 1 for the ac it cools it further with 2nd fan when ac is on you got to find out what relay is for engine cooling since I don’t know we’re u live but in pa it’s cold already google it or look on lid then swap it out with one that isn’t that important I believe the horn is the same on that car swap em n see if fans operate again as they did turning on ac is turning on 2nd fan you have a bad engine cooling fan relay I’m 85% suré anyways I just worked on my Acura tl with same issue I ended up bypassing the entire factory relay installed a temp sensor inline the radiator hose to turn on n off relay I set it at 185 on and 165 off this semm to be working out fine now all is well it has 239,000 I wasn’t about to mess with brittle wires…there I are 2 señsors 1 is like a thermometer its function is to turn the driver’s side fan on n off dependant on temp it’s the temp gauge sensor I believe and the other is a relay that controls the fan on driver’s side I am almost certain my money is on the fan relay hope I helped…