I was very unhappy to learn that the clutch slave cylinder on my Ranger was inside the bell housing. This made replacement very expensive, since the clutch itself was fine. Is there any good reason for this? I have replaced slave cylinders on other cars for $30.
Are there other cars that have this same setup?

Is there any good reason for this?

It keeps the cylinder out of the weather and it eliminates the throw out arm. Also more evenly loads the throwout bearing. Likely makes them less vulnerable to damage during the assembly of the car, as well.

Are there other cars that have this same setup?

Many use this setup. Like throwout or pilot bearings… it is a “while you are replacing the clutch” thing.

For the engineer to design it this way, they need to make quite sure that the slave has a longer life span than the clutch. My slave went at 125,000 miles, when the clutch was perfectly fine. In my life, I have never had to replace a clutch, a throw-out bearing or throw out are (except for this), and I put 277, 000 on an Accord. Slave cylinders have been necessary, probably two or three times. Easy to diagnose, easy to fix when external.
My real question: do Japanese or Korean cars use the internal slave?

Yes, some Japanese brands do use the internal slave. I saw a couple in Toyotas but a normal slave in the 86. The Kias and Hyundais I looked at had the external slave.

I will point out that you are in the minority with clutch life. Most clutches don’t last that long. There will be posters here that will chime in with similar clutch life as you, but it isn’t the norm.

Is there any good reason for this?

It’s generally a better system, like Mustangman says above. Fewer moving parts. Even load distribution onto the pressure plate since the release bearing is being pushed forward instead of levered sideways by the clutch fork. Takes up less space and weight.

As far as the hydraulics lasting longer than the clutch, that’s a very subjective thing. If you lived in hilly Seattle with all the stop and go traffic you would have replaced the clutch twice by the time you reached 125,000 miles. Also your Ranger is 25 years old. The slave cylinder may not have outlived the clutch friction, but it did outlast the expected useful life of the car. 1995 was a long time ago.

My 1995 had just 125,000 miles of everyday driving on it. The clutch was so good that the mechanic suggested I keep the parts because they were still worth re-using.
To be fair, my 83 Accord with 277,000 miles was driven primarily on long distance highway trips. My 1996 Miata has 176,000 miles and never had a clutch.
I’m still listening to see what other people know about Japanese and Korean cars.
Other things I will rant and rave about: cars that like walnuts, my Mazda3 does not have a spin-on filter, the Honda fuel-in-oil problem.

I’m still listening to see what other people know about Japanese and Korean cars. 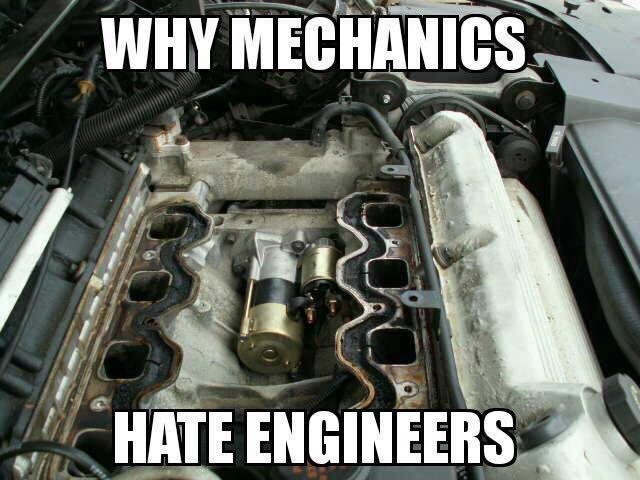 Why? Seems like a lot of book hours to put cash in the mechanic’s pocket.

Here is my “why”. When I buy a new car, I expect it to go to 200,000 essentially trouble free. By trouble-free, I mean the things that break are wear items, and smaller things that I can fix. (I’ll do timing belts.) So I am looking for a car whose design matches that philosophy. A wonderful car that I can’t fix will be ruled out. The bells-and-whistles are evaluated to see if they really add value. Blind-spot monitoring and backup cameras are good, but I can probably do without some of the other acronym things.

Mechanics ask the WTH were they thinking question all the time.

About 20 years ago a guy in a neighboring town asked me to replace a starter motor in a (gag) Renault LeCar. After eyeballing it for a considerable amount of time I could see no way to access the starter.
Found a manual and the suggested procedure was to remove both the engine and transmission to accomplish this. Needless to say he balked and asked me to figure out something else.

I eventually cut a hole underneath the clutch/brake pedals and removed the starter motor that way. This was followed up with making a 1/8" plate to cover the hole. With the carpet in place no one could tell a thing.

Then there’s the first Subaru automatic transmissions with a plastic governor drive gear driving a steel govenor gear under fluid pressure. It’s not difficult to figure out what’s going to happen next…

A wonderful car that I can’t fix will be ruled out.

And exactly how are you going to determine that before you buy the car . . . ?!

Blind-spot monitoring and backup cameras are good, but I can probably do without some of the other acronym things.

Well, unless you’re planning on buying used cars instead of new, any new car and/or light truck will have lots of those “acronym things” . . . whether you like it or not, because they’re required

Blind-spot monitoring and backup cameras are good, but I can probably do without some of the other acronym things.

Why do without some of those things like - ABS - Traction Control - Cross traffic Sensors - Parking Sensors - DRL ( that is an acronym for Daylight Running Lights which are a good thing ) .

Clearly, I am a bit of a Luddite regarding the bells-and-whistles. I read that some cars require you to take your eyes off the road just to “slide” the radio volume on the infotainment system! The Camrys that ran away because they were not programmed to favor brake override is another.
So, some of these acronym items are also immature in design, so I’ll let someone else learn the hard way. That doesn’t mean that I am against all of them. But, what a joke to think that someone can design a safe self-driving car!

It is clear that many of the problems described here on cartalk are beyond the capability of the dealer mechanic to troubleshoot. So, my car-buying principal is basically the KISS principal.

many of the problems described here on cartalk are beyond the capability of the dealer mechanic to troubleshoot.

Sadly, that seems to be all too true!