I could use some help troubleshooting an intermittent problem. When I drive in the neighborhood, no problems. When I get on the freeway and up to 60+ mph, I start getting some vibration from the front wheels, like something is unbalanced. Anyone in the car can feel/hear it. There’s a shimmy in the steering wheel. When light pressure is applied to the brakes there is a stuttering feel to them. When I get off the freeway (next exit!) and slow down, things generally return to normal but on rare occasions the problem will reoccur even at neighborhood speeds. I also observe a burning smell when this happens, and, in my inexpert opinion, when I stop and look at the wheels it seems like there is an inordinate amount of heat coming off the hub/brake area.

Bought the car used. Shortly thereafter the front brakes started locking up on occasion. I pulled the wheels and calipers off. No obvious problems, pads looked ok, but everything was old/dirty with some corrosion. I guessed that the caliper slides were sticking, so I cleaned everything up and greased them before reassembly. No more locking up after that.

A year and a few thousand miles later, a god awful noise alerted me to the fact that a front right pad was down to metal. Left pads were still ok, but right pads were well worn and were not worn evenly; one pad had a distinct wedge shape from inside diameter to outside diameter.

On both sides I replaced pads, calipers, rotors, and bearings. Everything seemed good at first, but then I started getting the problem described at the top of this post.

Took it to Les Schwab and had them balance, rotate, align and inspect everything. They didn’t find any problems. Tires are only a couple years old. Drove a little straighter but still had the same problem at high speed.

I thought it might be the ABS, so I pulled the two fuses for that and took it for a test drive. No difference.

And so here I am asking for your help.

If the front shocks are worn, it can result in tire bounce at higher speed. causing a vibration. 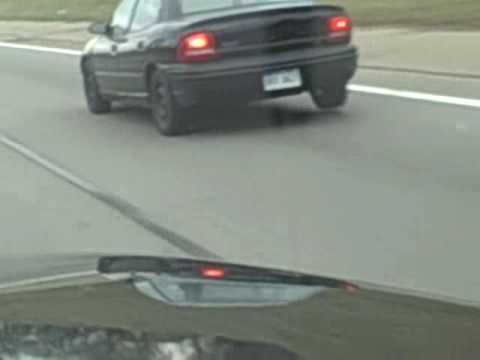 I also observe a burning smell when this happens, and, in my inexpert opinion, when I stop and look at the wheels it seems like there is an inordinate amount of heat coming off the hub/brake area.

I am going to suggest that either a caliper is sticking just a little bit or a brake hose is failing and preventing the caliper piston from retracting. If, after a highway drive, you check the temperature of each wheel, I’ll bet you find one front is MUCH hotter than the others. That is the one dragging and burning up your brake pads. I’d bet the rotor is warped as well.

Take it from my experience… if ONE brake hose is going bad, best to replace them ALL of them. Or at least those on the front axle.

It feels more like a side-to-side wobble than an up-and-down vibration. The suspension seems ok and Les Schwab gave it a once over and didn’t see any problems.

Actually I did check hub temperatures after the test drive yesterday. Both the back hubs were at 90F and both the front hubs were about 225F.

A caliper sticking was my guess too. I didn’t mention in the OP but when this problem appeared I did take the calipers off and reapply grease to the slides. No difference.

Do new calipers sometimes not “relax” between braking?

I forgot to mention that I also replaced the brake hoses in front (just the ones in the wheel wells).

As MM suggest above, for more clues, good idea to measure the temperature of all four wheels after a long’ish drive.

I mention in the OP that I had Les Schwab balance the wheels. Calipers are new and nothing is missing. I did replace the brake hoses in the wheel wells, but if there is a hose somewhere that feeds both both front brakes maybe that could be it?

there is a hose somewhere that feeds both both front brakes maybe that could be it?

Maybe, but I’m guessing now the problem isn’t the brakes. Suggest you do the temperature measurement again, this time after a longish drive where you don’t apply the brake pedal very much. Front brakes take more of the load, so if you did quite a bit of brake applications it would make sense the front brakes are considerably hotter than the rears. But not so hot as to be out of spec, and since the same temperature, seems an unlikely cause for front wheel vibrations. Suggest to have an inde wheel specialist (rather than LS) re-check the the front wheel balance. Ask them to check the left/right and up/down run-out as well.

I’m working on a front brake problem on my Ford truck, hearing a sort of whishing sound, like the sound of a broom on cement. Not noticed during braking, only when hand turning the jacked-up wheel.

What make/model of tires are you using on the front?

Interesting link, thank you. Maybe that’s it? But it seems like there was a preexistent something going on with the brakes and the vibration thing on the highway started after I replaced everything.

It seems like maybe there’s always a little pressure on the pads and they heat up at high speeds. Could that create the problems I’ve experienced? If so, is there a failure in the brake system that could lead to a slight overpressuring of the brake fluid?

You could have a bad master cylinder holding pressure on the front brakes.

Or a bent hub.

If you have a lot of rust build up on the hub where the back of the rotor would touch it. sand it off. rust build up can cause the rotor to not sit flat and give you a slight vibration. just a thought

A lot of good suggestions. Thank you.

I’ll report back when I know more.