2017 Chev Cruze with a little over 4000 kms on it.
Service power steering warning, abs , traction control, brake and power steering lights on, will start but stuck in park.
I’ve searched other forums and have found many people with the same issue, but no solution, other than replacing the negative battery cable which seems like a red herring as mine is tight and connected securely.
It’s throwing a bunch of codes. 23 before flashing PCM (Attaching disconnected Neg battery lead to Pos terminal for 15mins) now down to 12. Most of them about an inability to communicate with various modules related to above.
Is it possible the car, which has been sitting for several years with a dead battery, needs (apart from a new battery) the software updated?
Ive attached an image of the OBDIi report in case that helps shed light: 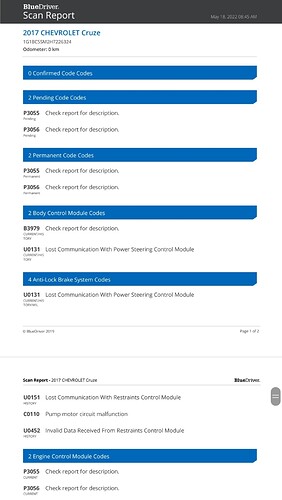 Is it possible the car, which has been sitting for several years with a dead battery,

It is possible something occurred while the battery was dead/discharged that caused several critical fuses to blow. Check all fuses in each fuse box; under hood and under dash.

Thanks for your reply. Ive checked every fuse i can find, under the hood, in the cabin and next to the battery, theyre all intact

Sounds to me like you have a battery supply problem. The first thing is to make sure the battery has a full charge and then have it load tested. Replace if necessary. Once you have a known good battery in place, make sure battery cables and terminals are clean on both ends of cables. The only way to be sure they are clean is to clean them. They can look clean and still be dirty.

Once you have a good battery and clean connections, put your voltmeter black lead on positive battery terminal and red lead on starter positive terminal. Have someone crank the engine. The voltage should read under .5 volts. If not, replace cable. Then do the same for negative cable. Except this time put the voltmeters black lead on the negative battery terminal and the red lead on the starter body or good ground, maybe near where the starter meets the engine. Again voltage should be under.5 volts while cranking. I suspect after all these conditions are met, your problem should be solved. If not, you still have to have this vehicle tested to this point to diagnose the problem. Let us know what you get.

Disconnecting or having a battery go dead may require the BCM to be reprogrammed in order for it to communicate with other modules.

It resets the Body Control Module (BCM). Like the Climate Control module, the BCM may not resume normal operation until it has undergone a special relearn procedure or is reprogrammed with a factory scan tool. This can mess up the operation of power accessories such as power windows, memory seats, power sunroof, or electronic suspension settings. Worse yet, the BCM is the “gate keeper” module on many 2003 and newer vehicles that have a CAN (Controller Area Network) system. If the BCM cannot communicate properly with all of the other modules, or it does not recognize the addresses of other modules, it can cause all kinds of problems.