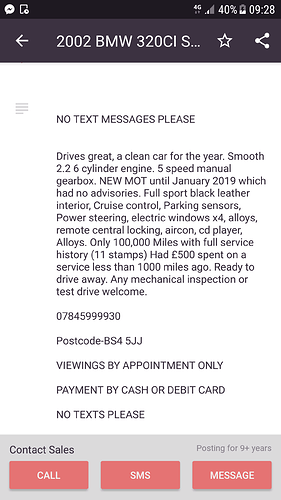 Screenshot_20180123-092818.png1440×2560 274 KB
Anyway got there test drove it and all looked good except he was acting as a private seller although he did have a tiny premise with about 8 cars there. This was kinda a red flag for me but he did offer a months warranty on complete engine and gear box failure. Anyway I made the deal but while on the way home the car stalled on 2 occasions and just put it down to me as I was not used to driving a bmw. When I finally got home I smelt a horrible smell of burnt oil in the cabin and I actually found lots of oil in the exhaust tail pipe. I have the car booked into the garage on Tuesday but my hopes are not great. I called the guy up and explained but now he has my money he don’t want to know and just fobbed it off saying it has a full mot. What if anything can I do about this? If the answer turns out to be nothing I’m seriously considering blowing the engine so he has to splash out on a replacment
COROLLAGUY1 January 28, 2018, 11:29am #2

The ad mentioned that you could bring the car for an inspection…why didn’t you?

Don’t do that! since you had a month warranty on this car the seller should consider fixing it at his own cost.

You must have miss read the part where I mentioned “COMPLETE” failure. Whereby the car won’t run due to engine or gearbox. The car does run it just stinks out the cabin, leaks oil from tail pipe and stalls a lot, but it does run so it’s not classed as complete failure

Why I could not of had any problem when I was test driving it!! I am some one that has a lot of debt and this took all my savings I needed this car to travel to work. I physically feel sick and the wait until Tuesday to have the car checked out seems like forever.

This guy I bought the car off told me he was a private seller yet he has a small premise with several cars for sale is he acting illegally?

This guy I bought the car off told me he was a private seller yet he has a small premise with several cars for sale is he acting illegally?

f you discover a dealer selling cars as a private individual, report them. They’re obviously fraudulent business owners who are playing the system.

I have no idea what British laws are concerning private versus dealer sales. But before you do anything READ the fine print in your 30 day warrantee.
Out of curiosity what does MOT mean? Not a common term for North Americans.

Yes, that is why I requested the translation of MOT, from British (UK) English into American English.
I have no idea what MOT means.

There was no small print just a hand written months warranty we both signed. MOT is just a yearly check of the vehicle to make sure it meets safety requirements

If the warrantee says 100% coverage for parts and labor, get the estimate from your mechanic and present a copy to the seller.
Intentionally blowing the engine could be seen as fraud on your part.

If the seller refuses to honour the warrantee you may need to discuss the matter with your solicitor.

Warranty does not state 100% coverage on parts and labour.

You did NOT post a copy of the warrantee, therefore we can NOT read carefully.

This was kinda a red flag for me but he did offer a months warranty on complete engine and gear box failure.

There was no small print just a hand written months warranty we both signed.

Was in my initial statement and in following posts!

Jake, most of the posters on this site are United States based so our suggestions might not even apply to where you are.

So why not post a copy of the warrantee ?

I have no idea what MOT means.

MOT=Ministry of Transportation
This is the UK government entity that registers and inspects motor vehicles.

A number of things wrong here. You buy a shaky 17 year old car and do not have it pre-inspected because
you “don’t know anyone who has mechanical knowledge”.

That’s a cop out excuse for being cheap or lacking funds to have it done. You don’t HAVE to know anyone with mechanical knowledge; simply take it to a garage and have it checked for what I assume would be 50 pounds or so.