I found a good forum on wrenching apart stuck pipes that could help those with stuck bolts and nuts, from the steam-fitters: Removing old stuck pipe fittings...advice? — Heating Help: The Wall

’ published tests have shown that a 50/50 mixture of Acetone and power steering oil have shown to be much more effective than these or any other commercially available penetrating oil.’

I use 1/3 acetone, 1/3 WD 40, and 1/3 auto trans fluid. It seems to work at least as good, probably better, as the other stuff I’ve used, Liquid Wrench. Even that wouldn’t allow me to remove a really rusted 3/4 steel pipe fitting/one-foot pipe section one time that I found buried in the ground probably 50 years. I used it as a test case, as I could put it in a vise so no access problems. Heated it, with a propane torch so it was red hot, no go. Oxy-Mapp. No go The above mixture, soaking daily for a week, no go. Big pipe wrench with cheater bar, still wouldn’t budge. Never was able to get the parts apart. I didn’t try the tap-tap-tap anvil method described in that thread though. Folks here suggest propane isn’t hot enough sometimes, you have to use an oxy-acetylene torch. Interesting discussion in any event, thanks for posting.

How do I get this clean out plug out? The vert pipe is about 2”. 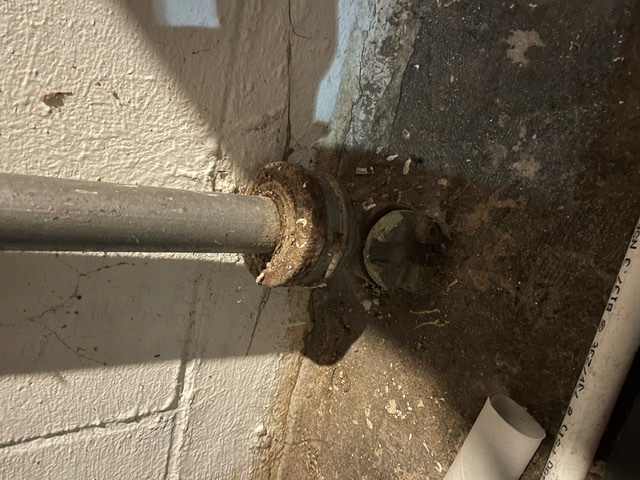 not sure if yours is the same, but the one we have the plug is made of lead and so was the replacement the put in when they worked on ours. you could heat it up on the outside of the casing to loosen it. if the lead threads melt a little it is ok. after you get it out heat up the inside part of the threads of the casing and wire brush the inside threads clean. just a thought.

We had one the plumber busted out and replaced with plastic. I think it may have been brass.

PB Blaster is my go to.

Did you try the tap tap tap method described in the OP link? Might be worth a try.

How do I get this clean out plug out?

Not on plumbing of course but on standard metal parts, once I get them apart I use anti-seize everywhere. My favorite small engine guy on youtube goe with the heating to red hot, then quenching cold with cold water. Just heating doesn’t do it without the quenching again. The other thing is heating and melting wax on the joint.

Plumbing is a whole 'nother matter though so before destroying the part, call a plumber.

The cleanout plug is a good one because the concrete is higher than the plug. Unpour the concrete…