Worst or most unserviceable designs?

This came from a Facebook meme so I don’t know if it is real or photoshopped. I seem to recall the Cadillac Northstar starters being under the intake manifold so that has to come off but having to remove the transmission takes it to a new level.

I have complained about having to jack an engine out of the cradle a bit to clear the front subframe and replace a thermostat. What are some other “bad” designs for serviceability that others have encountered? 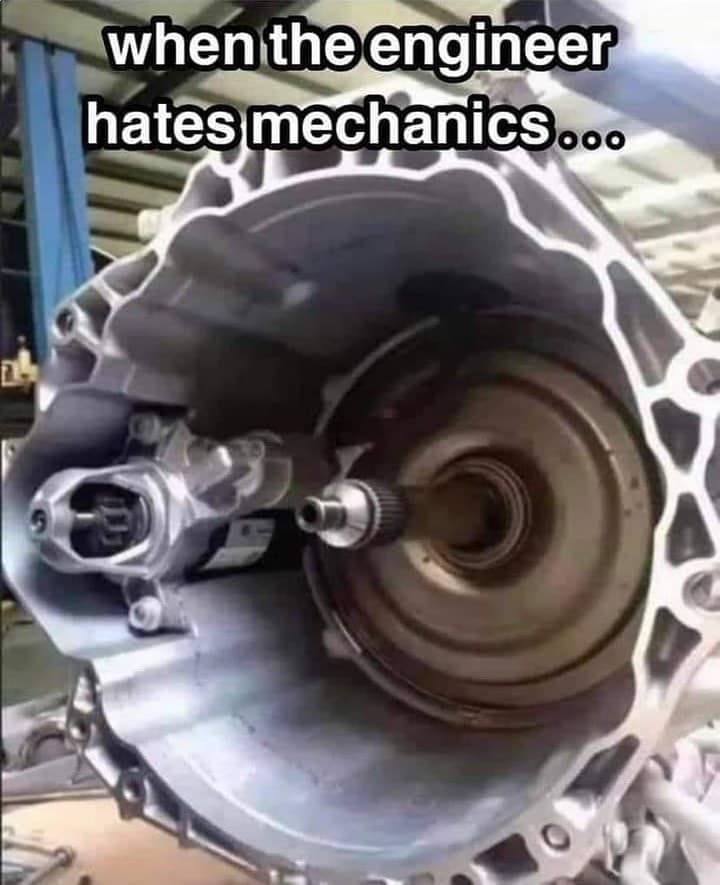 Porsche Cayenne… requires about $1800 worth of time to remove things to replace a thermostat. This from a friend that owns one that had its T-stat replaced.

A clutch on the earliest Saturn cars… that were actually Saturns not rebadged Chevys… the engine cradle needed to be dropped to change the clutch… for 3/4 of an inch interference. So CLOSE, yet so FAR! Otherwise easy to work on.

Now the Caddy Northstar (an its Oldmobile variant) was not the only engine to require the intake be removed to replace the starter. I believe there was a Toyota 4.7 V8 that required the same.

Considering how many starters get replaced unnecessarily because of untrained mechanics and DIYers, maybe this is a good thing!

How about this? Of course you aren’t buying one of these as a daily driver that is easy to service but it takes the cake. https://www.bugatti-broward.com/service/service-information/bugatti-oil-change/#:~:text=Bugatti%20oil%20change%20costs%20usually,you%20require%20during%20the%20visit.

I went through a bad batch of starters where I started to think I was doing something wrong. Nope, just AutoZone and its China starters… I started looking into other possibilities and they were all good. Finally I got a good starter from China. These was the lifetime warranty “gold” version as well. One had apparently been damaged in transit as well so we can’t blame the make on that one.

I went through a bad batch of starters where I started to think I was doing something wrong. Nope, just AutoZone and its China starters…

My brothers 1978 Volare’ had a problem with starters. After the second one failed, I decided to pull the tranny. The flywheel was out-of-round.

The infamous Subaru “Ring of Fire”.

recall the Cadillac Northstar starters being under the intake manifold

Those Northstar starters were far easier to replace than Toyota V8s with the starter under the intake.

I was concerned about something with the flywheel as well. I don’t know if that could be the issue I had but the last starter worked from the beginning and has continued to do so. I am not going to mess with it if it is working now.

The Million dollar 1995 McLaren F1 used tires that cost $20K a set and required you send it back to the UK for $ervice until 2 centers were built in the US.

I hate the north star engine in our olds and the starter was under the intake but it never went out. Toward the end I had a clogged egr
passage and after the dealer did what he could, said the trans would have to come out to fully clean it. Just lived with a check engine light. I think that one also required the radiator to come out the bottom too so not a diy job.

That is the good thing about places where there is no emissions testing. You don’t have to worry about something like this. The cost to service of an older Oldsmobile might essentially “total” the car with what it costs to unplug the EGR. I have used stranded cables on EGR passages in the past as well.

Cars are designed to be built on an assembly line, not serviced. A side benefit for dealer repair shops is that often repairing those vehicles is difficult enough that a a lot of people don’t care to get the special tools to make the repairs. They would rather spend the money on shop labor.

My son just replaced the starter the other day on his 2008 Acura tsx. it was under the intake manifold. but he said it was not too bad to replace.

The EGR on Nissan 4 cylinder vehicles comes to mind. The engine on a Subaru has to be lifted up to change the plugs, but even those are easier than changing the back three plugs on a GM 3800 that is tranversely mounted

On a 2001 Windstar I had to remove the wipers, cowl, and wiper assembly to make it easier to get to the rear plugs, wires, and coil pack. one good thing about cars from the 50;s and 60;s was all the room in the engine bay.

We replaced our 1996 Windstar with a 2003 Olds Silhouette. Great van: comfortable, quiet and reliable. Anything under the hood was miserable. Front plugs were easy. To get at the rear plugs you had to remove the engine mounts on the radiator brace, tilt the engine forward, remove the coil pack, then reach blindly into the abyss behind the engine to reach the three plugs back there. Great Big Pain.

On my Corolla, starter is quite a challenge to diy’er replace, if done by the shop manual method, removing it from the bottom. Much easier diy’er accomplished by removing it from the top. The other one on the Corolla that gets my attention, water pump pulley removal requires removing motor mount & jacking the engine. That pulley has to be removed to replace the water pump of course, but also just to remove timing belt cover.

More room in truck’s engine compartment, haven’t run into any super-difficult diy’er jobs there. But servicing the front brakes (for new shoes, etc) requires first removing all the free-running-hub gadgetry, then removing the drum and both wheel bearings. When it comes time to put all that stuff back together, one part of the job requires you pull outward on the front axle while you push inward on the hub, while you install a snap ring. In other words you need three hands … lol … .

That is one thing you can’t say about the Geo Metro! There is actually a lot of room to work under the hood and the car was designed to be repaired. I understand there wasn’t quite the room under the hood of the 4 cylinders but I always had the 3 cylinders. I once changed a broken timing belt on the side of the road in about an hour. Spark plugs, a thermostat, and the starter were all easy jobs to do when I had one of these. They were mechanically simple cars for sure. I once had my girlfriend help assist with changing out the transmission in one of these cars and she is not technically inclined at all. I just gave her instructions to follow and it worked.

You wouldn’t think a car this small would be easy to work on but it was just a simple and basic design with the important stuff easy to access. There were a few things that were a pain but that goes for any model. Minivans and transverse V6’s seem to be a pain. I would take something like this to a shop and just pay them at this stage of my life.