Check out the video of a Ford Focus crashing into a wall at 120 MPH. 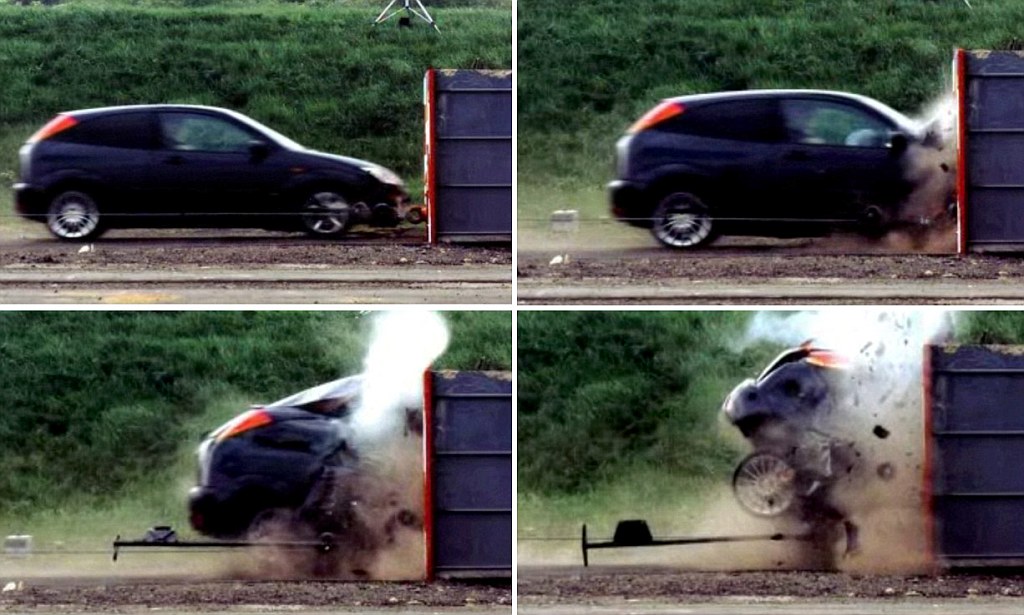 World's fastest ever crash test: Car smashes into wall at 120mph (a speed...

The complex operation saw engineers setting up a winch which thrust the Ford towards the wall using 16-times the pulling power of a Bugatti Veyron.

I almost posted the AutoBlog link to this video.

Thanks bscar I could not get it to post this way.

No one survives a crash like that. In an accident like that, you’d be better off not wearing a seat belt in the hope that you’d be thrown through the windshield, which would at least give you a very small chance for survival. Maybe a larger car would have fared a little better, but only just. (think the Mercedes that Princess Diana was riding in)

Not completely indicative of a real world crash.

When two vehicles collide head-on at 60mph each, ( Hence this 120mph test ) half of the energy will be absorbed by vehicle #2 and not totaly into car #1 ( since the concrete barrier absorbed none ).

I agree Ken. Two vehicles crashing head on at 60 mph each is really the equivalent for each car of crashing into an immovable concrete barrier (like a bridge abuttment) at 60 mph.

I opened the link and as I understood it TG did the test to see what would happen to a single vehicle at 120 mph, as most family sedans now are capable of that speed. I found the images very sobering. I wish the images from this test were widely distributed by the general media. There are a lot of kids tearing around out there who have no idea what a high speed crash can do to a stock vehicle. They see race drivers walk away from 200 mph crashes and don’t understand how different those cars really are.

HEY! You scratched my barrier!

I was never real sure of the physics of two cars going 60 MPH crashing head-on, but a car traveling at 120 has 4 X the kinetic energy of the same car traveling at 60, 9 times what it would have at 40, so crashing into an immovable barrier will yield a much more devastating result at 120. That is clearly obvious in this vid.

I just stumbled on a “Mythbusters” video that confirmed my long-held suspicion that 2 cars colliding head-on @ 50 MPH (closing speed of 100 MPH) is drastically different than a car hitting a wall at 100 MPH. In the 50 MPH head-on crash, both cars ended up about like the one that hit a wall at 50 MPH (front-end smashed, some cabin intrusion). The car they crashed into the wall at 100 MPH was obliterated clear into the rear seat area almost like the 120 MPH Focus in the vid posted on this thread. The fact remains…Doubling the speed quadruples the destructive force.