I went through this with a couple used mowers that were given to me. Both were single-cylinder Kohler Command OHV riding mowers. It got them running pretty easily but it was apparent they were very down on power and would bog down in a cloud of smoke from all the oil burning at any hint of resistance. They also use hydraulic valve lifters which were clattering quite loudly. The old oil was nasty so I changed it with a conventional 10W30 as called for. This didn’t really help but someone suggested I use a Rotella T6 5W40 in these.

Well, the new oil turned these into new engines. The oil consumption stopped, there was no more oil smoke, the power came up tremendously, and the lifter clatter quieted down within one mowing. I mowed maybe 3x times on that oil change and then changed them again with more of the same Rotella. The drained oil was NASTY like it had really cleaned something out. Then I changed again at the end of the season and the oil didn’t even look like it needed to be changed.

Are you using the correct oil as spec’d by Toyota? I presume your car has the 1ZZFE 1.8L engine. The oil spec’d for that is API-SJ Energy Conserving 5W-30. Most people use their cars for a lot of short trips, which requires using the “severe service” maintenance schedule. Is that the one you use? How many miles between oil/filter changes? Are you using an aftermarket oil filter? If so, might want to buy Toyota’s. How much oil do you have to add per 1000 miles? Do you notice very noticeable blue-ish/black puffs of smoke out the tailpipe when first starting the engine, after it has been sitting for several hours? Any oil leaks? Spec’s appear to allow use of 10W-30 if always above 0 deg F. Have you tried that in summer months?

That’s a good one, I almost blew soda out of my nose. 30% over the EPA estimates. I find that hard to believe.

I think the rotella t6 is a diesel oil. I believe it has some zinc and additives to clean deposits. So ya think it was the rotella, the full synthetic, the 40 weight or the combo that did it?

In my diesel I switched from Penz to rotella way back. Truck stop was the only place that had it and bought it by the gallon.

Are you thinking at all of doing the repair laid out in the Toyota Nation forum in which you’re also asking about this? It’s the right thing to do if you intend to keep the car that much longer.

Yep! It is a diesel oil with more anti-wear additives and detergents as you mention. I am pretty sure it was more the detergents as it burned quite a bit of the Rotella during the first mowing but then stopped. I also ran the thing pretty hard to really give it a workout and work the rings free if they were sticking.

The lifters also took about the entire mowing to stop clattering as well. I seem to remember some clatter on startup for a while but that went away as the engine got cleaned out by the detergents.

I talked to a couple mowing services around here who use this as their “universal” power equipment oil and do this professionally so it must be good for these hot running engines.

I have an older mower as well that uses an opposed Kohler engine. I forgot that series but it isn’t OHV and all cast iron. It calls for straight SAE 30W and I am running the Rotella T6 in the 15W40 in that one. It still burns some oil but not what it did when I got ahold of it.

Since Briggs changed their tune I have been usin 5-30 Mobil 1 in everything. So far so good. I’ll keep that in mind but a little hesitant to use 40 wt in the snow blower. I like the zinc though with some flat head and some ohv.

I suggest a piston soak.
You can google details, but here’s the Cliff notes:
Remove plugs, pour strong solvent of your choice into cylinders, wait a bit.
Wiggle the crankshaft back and fourth a bit my hand with a wrench etc., add more solvent.
Repeat (no lather, no rinse).
Toss a rag over the plug holes and crank with the starter a couple seconds to drive out remaining liquid.
Replace the plugs, change the oil, cross fingers.

I suggest a piston soak.

That indeed seems like a pretty good idea, worth trying. Isn’t the current theory for the more than expected oil consumption problem with these engines that the piston ring gaps start to align?

No, it’s that the oil return holes in the pistons are too small and/or too few and get clogged up. And then the oil control ring gets all crudded up too. A mechanical repair is almost certainly required.

I gutted the catalytic converter

Great. Your car is broken, and the fix is to break it even more?

What do you expect me to do?

Repair or replace your car. Hacking it up is never the answer for a car driven on public roads.

Have you thought about going into the automotive field? Mechanics are making decent wages these days.

You are probably good then. I think they might make a T6 in 5W30 as well and there are diesel oil blends you can buy as well. Diesel oil, even conventional, has better anti-wear and detergent additives. You don’t have to worry about fouling your oxygen sensors or cat on a non-emissions engine of course.

I doubt 5W40 would hurt a snow blower if it was stored in a heated garage and started quickly after being taken outside but that 5W40 does seem quite thick in cold weather and I personally wouldn’t use it in something stored outside. The 0W40 Mobil is probably a better bet though as it seems much thinner when cold. If you have 5W30 for everything else, that is probably easiest for you and won’t hurt anything.

For a mower run in the heat of the summer, 5W40 seems perfect.

but that 5W40 does seem quite thick in cold weather

The 5W is the winter weight of the oil.

So it has the same viscosity at 0 degrees or 90 degrees.

So it has the same viscosity at 0 degrees or 90 degrees.

Well, not quite. It changes less with temperature than single weight oils, and 5W-40 has the same viscosity at the ‘low’ rating temperature as other 5W oils, like 5W-20. I haven’t found what the reference temperature is for the ‘W’ oil test. One place mentioned 0F, another 0C. 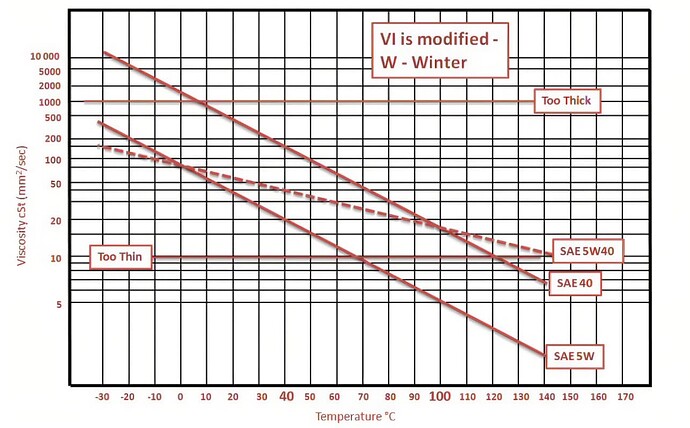 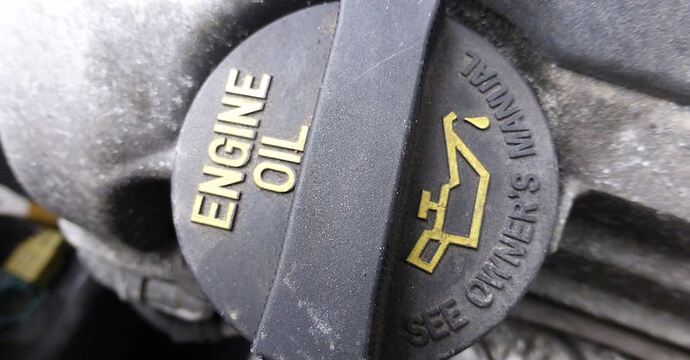 Check out these three things you need to know about winter engine oil and how winter oil viscosity can affect your vehicle's performance and longevity.

I guess there are pretty generous ranges these oils can be within. I know what you mean but if you take Mobil 1 5W30 and Rotella T6 5W40 in the cold, it is really obvious that the Rotella is thicker when pouring.

I know what you mean but if you take Mobil 1 5W30 and Rotella T6 5W40 in the cold, it is really obvious that the Rotella is thicker when pouring.

Reminds me of doing the ‘shake demo’ at the Sohio gas station in winter. When the customer needed a quart, we were supposed to take the expensive Nitrex multi weight 5W-40 (one of the first) and the cheaper Duron 10W-30 can off the outside rack and let them shake them. ‘You don’t want that thick stuff in your car, do you?’

Simply put, the oil will flow like a 5 weight oil from 0 degrees up to 212 degrees, at which point it starts flowing like a 30-40 weight oil.

No, it follows that dashed line. It doesn’t stay on the 5 weight line until 212F.