Will the Toyota "A-BAT" ever exist?

Hello – I came across several articles/discussions about a Toyota future small truck called the “A-BAT.” I’m getting older and the current line of “small” trucks (Tacoma, Frontier, Colorado) are too high off the ground to make entry and exit easy (or at least convenient without hurting). So this A-BAT looks to be a truly small truck with some odd features. (see attached). BUT it seems to answer all my needs except for side-liftover height.

It seems to have been a Concept in 2008, but it keeps coming up for possible production. The scanned jpg that is attached started with 2015 - implying soon!

Anyone out there KNOW a planning date so I can buy one?

Thank you for your time,
Len

I haven’t heard anything about it. I doubt it. Check out the new Colorado, and Ford might bring the new Ranger here.

All manufacturers produce numerous concepts that never come to market. I would not be surprised if this was one of them.

There is one small truck I think Toyota plans to introduce in other countries, but that truck won’t meet the US gov’t emissions requirements, so it isn’t going to be sold here.

Being a hybrid would give the A bat some points as far as emissions and marketing but it was declared dead by Toyota execs in 2011.

Nuts! I may yet repair my 1986 Tacoma Extra Cab with a 7’ bed. Needs a new engine plus some body work. AND Thank You all for your info and thoughts.

Anyone Googled an image? Looks like a Ridgeline and an Aztec had a baby. Won’t be selling on good looks, that’s for sure!

Manufacturers take very seriously your desire to have vehicles like this available. But, the numbers of people who want them translated to the numbers that would actually buy them is a big jump in determining whether you will actually see them here. Even car features within models are varied from one area to another dependent on the precevied market. A lot of regular posters here have voiced the same opinion on vehicles like this, but as yet, attempts to make and sell them have not been succesful here in “big bad truck” land. If you own Toyotas and want them to them to make one, keep making them know of your wants and needs and encourage everyone else to do the same. Who knows? They may have a future. If it does, it might be called a Scion.

Toyota and many other Asian manufacturers already have tiny trucks with engines as small as 500cc. But why would they pay a lot of money to make them meet our emissions and safety requirements when they won’t sell enough to recoup their investment?

We don’t know how a smaller truck would sell, though it would need more power in the US than many other places. Back in the seventies and eighties small trucks were big sellers. Then the sales weakened and the trucks grew. I do think there would be a market for a simple small truck sold both to businesses that don’t need a bigger truck and with people wanting a car. cheap thrifty truck instead of an economy car. If they can give it some retro appeal (remember the decals) that could help them sell.

I’m getting older and the current line of “small” trucks (Tacoma, Frontier, Colorado) are too high off the ground to make entry and exit easy (or at least convenient without hurting). So this A-BAT looks to be a truly small truck with some odd features. (see attached). BUT it seems to answer all my needs except for side-liftover height.

These are all tough items to address in one vehicle where cost is an issue. Trucks and other cargo carrying vehicles need some elevation to enhance load capacity over varied terrain. It you can’t get a load, up over a curb or over a little rough ground, it makes many “trucks” unsaleable. I get in Europe that paved streets run right up to the doors of most domiciles and I can inversion a lower slung. easier entrance vehicle cargo vehicle gaining some poplularity. But here in the USA, a 4wd option, a little exta ground clearance with ease of entry seems a tough combination. The minivan based vehicle would work if one was designed with an open bed, but I don’t know that there would be any market here for it. I would still look at a minivan for your needs. Even the A-Bat I bet will have issues for you like the Ridgeline might.

The compact truck market is bigger in other countries than it is here, in the UK you mainly see Toyota Hilux or Nissan Navara’s with a diesel engine. There’s a market here but not nearly as big as for the 1/2 ton trucks. The new GMC canyon I saw the other day (crew cab 4x4) didn’t look all that small to me. The 2wd regular cab Tacoma parked a row away looked more sensible.

We here in t he U.S. have lots of space, big, wide roads, and a “mine’s bigger than yours” mentality. There was never really any technical reason for the old pickups to be displaced by ever-growing behemouths. An old-style F100, and even my old '79 and '89 Toyotas, could do anything the average homeowner (me) ever needed, and the hardware stores will deliver the really huge stuff, which you’d need with a behemouth F150 half-ton anyway. Lowes even delivered my new fridge for free. The only real technical advantage a behemouth pickup has is towing ability, and even that isn’t significant enough on a standard pickup to warrant the extra size.

For off-road, one of the best off-road vehicle ever was the '70s Toyota 4x4 jacked up a bit with oversize tires. Frankly, I used to haul wood out of the woods on construction trails in my small Toyota pickups.

But my '79 and '89 Toyotas never did impress the neighbors. Fortunately, my neighbors were never impressed by material purchases. All my old pickups did was everything I ever asked of them without complaint, including hauling some loads that I probably should not have been hauling. I put a load of stone in once that dropped the bed to the stops. I only drove about 10mph for about 1-1/2 miles on construction roads, so there was no safety risk, but the truck never complained.

Don’t get me wrong, I’m not suggesting that the small pickups could tow 35 foot cabin cruisers, but they meet 95% of all the needs the average homeowner has. Unless perhaps you fish for a living.

I believe the reason the ever-growing behemoths displaced the small pickups was market demand, and the reason for the market demand is the conspicuous-consumption attitude so common in the U.S.

Hyundai has a new concept called the Santa Cruz, Probably more for south america and other markets but if they can get the Diesel in the concept to pass EPA standards. Looks more than a bit like the Toyota A Bat but more like an extended cab rather than a crew cab. 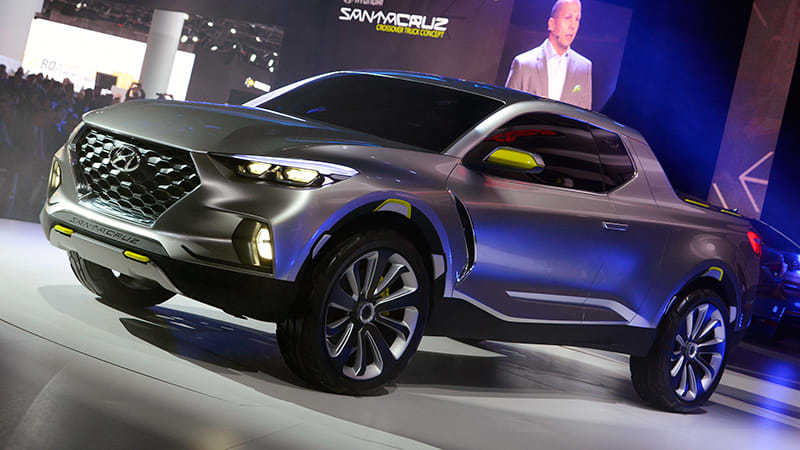 It’s cool looking, but unavailable. You could try a small truck with a frame. But Like all small trucks with frames, they ride like crappolla. Big trucks ride comparably like limos.

Unless, are you ready ? Buy a used full size 2wd truck and have it lowered. Some do it and have a Crown Vic on steroids with a low bed you can load and a seat you can get in and out of…as we age.