Why are all the new cars going for skinny tires? They are less safe (more likely to come off the rim) and cause a harsh ride. Is this a fashion thing, like short skirts, that we can hope will go away?

Rims and tires have been getting bigger over the years.

In case you hadn’t noticed, when the wheel gets bigger, the height of the tire gets less.

I’m guessing that melott is talking about something like this… 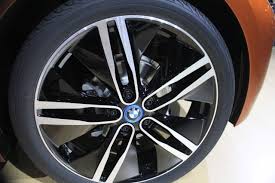 It does seem to be more of a “fashion thing” than a practical thing. I don’t know if they’re less safe but they certainly can’t be using these tires for ride quality.

Right. Does anyone know any other reason. Like, maybe, the whole thing being a little lighter and contributing a tiny bit to gas mileage? Anyway, I hate it.

So you mean a shorter sidewall not narrower overall width. I think its because they handle better. Easier for the sidewall to be stiff if it is shorter. Something like that. Given that most people don’t need race car handling its just because it looks cool. Its stupid IMO as a good pot hole will wreck your rim.

Styling more than anything else, although the taste is questionable in my opinion.

I can’t speak for other areas but if one reads the Craigslist ads on auto parts in the areas around here there are countless numbers of those ultra-low profile tires and wheels for sale. They’re obviously being unloaded by people who have decided they have had enough of a harsh ride, damaged wheel rims, and beating their suspension to death.

Some guy not too far away from me just slapped a set of 22" inch rims on his Tahoe. From half a block away you can’t even see the tires; just the rims. As if that wasn’t bad enough, he installed pink headlights.
It remains to be seen how long he will get away with that one.

This subject was tossed around several months ago and someone posted a link that gave a great many significant stats that all pointed to the short fat tires on tall rims being inferior to the standard cross section tires/rims that they replaced.

The real solution is to NOT buy a vehicle with low profile tires.

There’s still a few around.

The absolute biggest contradiction are the very low profiles on pick up trucks and SUVs. Make no mistake…people are buying these things.

I expect this is more a fashion trend rather than for performance. While there may may be some benefits to these low profile tires, there are big compromises both in the harshness of the ride, and damage from bumps ruining the wheels, which can cost $1,000 or more to replace.

It started in the ghetto and somehow the car manufacturers somehow managed to put it on the mainstream. I think it looks stupid and would not be caught dead driving around on those wheels.

When I worked at the dealership, customers with these aftermarket low profile rims and tires were told, in no uncertain terms, that the shop and the mechanics would not be on the hook if some damage occurred while it was in the shop’s care.

Super-low profile tires fall into roughly the same category as pants worn with the waistline below the crotch, metal studs through noses, tongues, etc., and maybe even excessive tattooing. In a strictly automotive vein, I might compare them to the (now thankfully fading) style of wheels extending well outside of the wells, resulting in sort of a rollerskate look. I guess that one was kind of forced, though, by the inability to narrow the front end when bigger wheels were put on FWD cars, usually at both ends.
I guess that’s another thing I don’t much like about FWD; it produced some really ugly customizing.

The absolute biggest contradiction are the very low profiles on pick up trucks and SUVs. Make no mistake.....people are buying these things.

There are a number of SUVs running around here with 30 and 35 series tires on them. It may all be in the eye of the beholder but I agree with MikeinNH; ugly and then some.
Someone here has even thrown some 22" rubber band tires on a Dodge Magnum that has tri-color paint. The car itself is hideous enough without the wheels.

If you live in the snow belt they are even more ludicrous. Wide tires of any height are bad in the snow and ice. The only exception would be deep lug tires in deep snow on unplowed roads or offroad.

My wifes car (Lexus ES-350) has low profile tires. They look good…But Pickups and SUV’s…Why someone thinks it looks good is beyond me.

@ ok4450 I was just driving on the highway and one of those truck was on the side of the road.
The bed was loaded with firewood and the fashion rim broke all around the wheelhub. All 7 spokes just snapped.