When to Replace Head Gasket?

I recently discovered a symptom of a blown head gasket. There is a milky, mayonnaise-like substance on my oil filler cap as well as the breather hoses (connecting the intake manifold to the camshaft cover/cylinder head). It’s yellow in color. However, I don’t have other symptoms of blown head gasket. For example, my coolant doesn’t bubble when the engine runs, the oil dipstick isn’t frothy; and I don’t have drops in coolant/oil.

My head gasket appears to have a problem (i.e. milky, yellow-like substance on different engine parts); but I don’t have other issues often attributed to a blown head gasket. I want the car to last a few more years. However, I don’t want to pay for a new head gasket. Replacing it myself is currently a bit beyond my capacity.

Any advice what I should do? I was thinking of using the head gasket sealant you put in the radiator. The product that finds leaks and seals it.

is your coolant level going down?

Not to my knowledge. I’ve monitored the level and it seems okay.

Run a compression test on it. That should help confirm it.

As for the sealers… if the car only has to last a bit longer, sure give it a try.

You seem to be describing moisture in the valve covers more than a blown head gasket. Sometimes the inside of the oil filler cap will appear milky but otherwise there is no full scale oil coolant contamination, if this is the case you are in luck and do not need to use a head gasket sealer at all.

Do not use the milky looking cap as the deciding factor but rather all the other bad things that occur with a blown gasket…if you do not have those symptoms, then its just a bit of moisture that can be “cooked” out with longer engine run times/longer trips.

where are you? chicago? atlanta? london? how cold does it get during winter? did it do this 1yr ago at this time? does it does it in the summer?

Moisture on the oil cap from the PCV system is caused from short trips.

Moisture naturally builds up inside an engine, especially in cooler areas and damper climates. Generally as the engine is put into service and the temperature rises, any built up moisture is burnt off by the heat the engine produces. Making short trips, on the other hand doesn’t allow the engine to warm up completely, giving the opportunity for moisture to accumulate and mix with oil on the bottom of the oil cap. Moisture can also accumulate and create sludge on the cap if the seal on the cap is worn or damaged. The best practice is to clean the bottom of the cap with brake cleaner and always allow the engine to warm up when taking short trips. 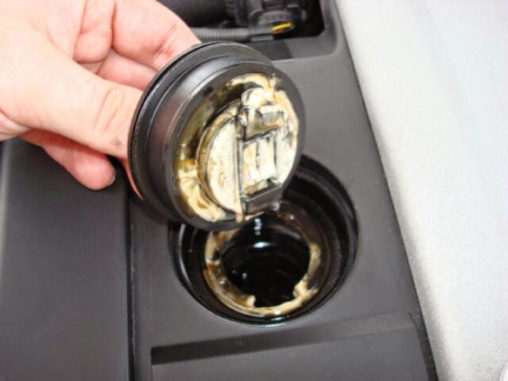 If the oil on your dipstick does not look like a milkshake, but it is only on the breather or in the valve cover, it does not indicate a head gasket leak, but just likely condensation from short trips in cold or damp weather. Some engines are more susceptible to it than others.

Thanks for the info regarding short trips and condensation. The previous owner primarily used the car to pick up his kids from school. Lots of short trips. I don’t have a PCV on the car, however. It was breather hoses between the valve cover and intake manifold. Just not the PCV. Not sure why?

Cavell. I am living in Sheffield, England. It’s northern England not too far from Manchester. The low in the winter is around 32 F. Not too cold. The summer is quite cool (high 70s at most). The coolant level is steady.

Mustangman. I’ve thought about that. Not sure how much I want to invest in tools. I might move back to the States next year. If I do, I’ll have to sell/give away my tools. I moved here 2.5 years ago. Gave all my tools to my friend. He’s a car guy and will use them. Was still really hard to part with all of them. If we’re here longer, I’ll buy a compression tester.

If your car is blowing white smoke from the exhaust, that’s a head gasket leak. Blue means burning oil, gray means petroleum or gasoline, which is normal. I would replace the oil cap as sometimes, the o-ring seal on those things can and will crack or form, however, if you do long trips every day, chances are, it won’t have that issue any longer. My car did that when it was cold outside and short trips once a week, yet, the other 6 days a week were better (no substance on the cap), and my coolant was low because of a crack on the recovery tank at the water return inlet on the tank itself (no cracks, splits, or holes in the hoses, thankfully).

Isn’t it peculiar that most people don’t recognize the difference in steam and smoke regardless of color.