What to expect from Wisconsin winters?

Watch and see the difference.

I agree with Mustingman that if you have only one set of tires, they should be M&S rated, also called all-season tires. One such tire that stands out in snow and ice is the General Altimax RT43. We use those year-round on our Town and Country van and they are very good.

I don’t think Mustingman was claiming that M&S tires are just as good as dedicated winter tires in winter conditions. They are not, but on an AWD car they may be more than satisfactory.

It wasn’t difficult to understand. I agree as well, you want at least M&S rated all seasons and preferably dedicated winter tires if you can afford the expense of having two sets of tires.

Yup, exactly what I meant by that. I am very familiar with the difference between M&S and Winter tires. Hence the “mountain goat” comment.

It wasn’t difficult to understand. I agree as well, you want at least M&S rated all seasons and preferably dedicated winter tires if you can afford the expense of having two sets of tires.

I don’t winter where it gets cold anymore so it doesn’t matter to me now. But, for @LossWhite who’ moving to the frozen north, I agree that M&S tires are all that’s needed on that Outback. That’s what my son has on his and it works great in his extreme winter weather area location.

Snow tires or Winter tires would be nice, but not very practical. One has to mount, dismount tires or a second set of wheels, store them, etcetera. And while those specialty tires are good on slippery or snowy surfaces they’re not the best choice for dry roads. Leave them on too long and they wear rapidly.

They make even less sense for people like me with six cars. For many years I had a minimum of 4 or 5 cars on the road at one time and we had 4 drivers in the house. I’m not about to screw around buying, changing, and storing all those tires. I need that like I need tap dance lessons.

We’ve never had a vehicle stuck, in a collision, off the road, or stranded because it had only M&S tires.
Water over the dam now… I’m out of that crappy weather (and the #$%! salt!) forever. Didn’t miss it this winter, won’t miss it next…
CSA

Ed gads, are we getting wimpy.
When in Wisconsin , flathead 6, 6 volt system, open diff, no problems!
Just requires common sense and a set of tire chains.

You come out of work to go home, and find this. 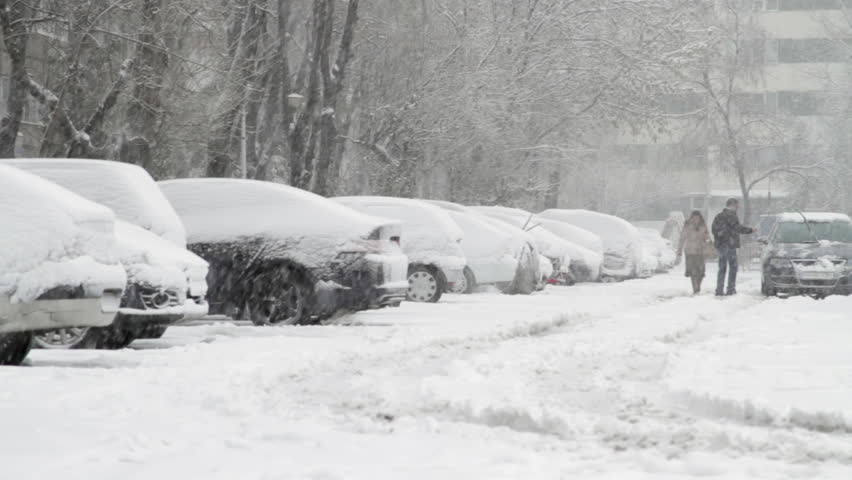 And then it takes two hours to get home instead of 30 minutes. 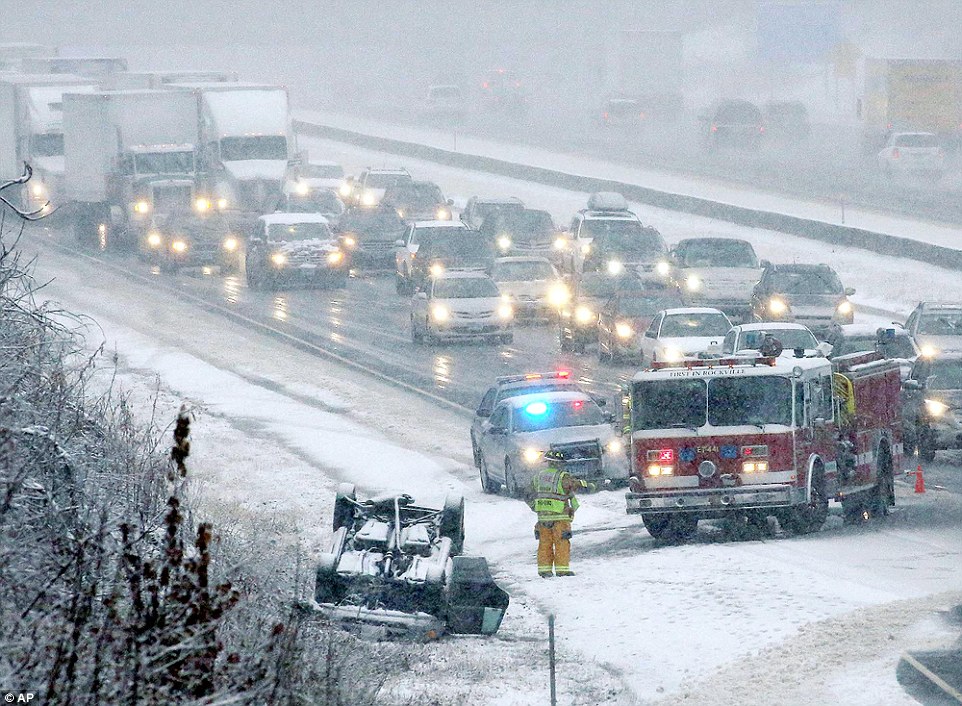 One thing not yet discussed is the need for windshield washer fluid that does not freeze - here in Duluth I usually draw down the summer stuff in October and refill with winter stuff until sometime in April.

Definitely, but I want to add a word of caution. Several years ago, I bought “the blue stuff” for windshield washers at Wal-Mart, and it was labeled as the winter variety. However, it froze in the line leading to my rear WW nozzle. Since that time, I will only use “the yellow” stuff for windshield washers in the winter. That includes both Rain-X and Prestone. Yes, they are more expensive, but they really do a better job of cleaning your windshield day in and day out–PLUS, they don’t freeze in the winter.

I don’t know whether “the blue stuff” that I bought at Wal-Mart was inadvertently mislabeled, or if it was just crap to begin with, but suffice it to say that I no longer buy “the blue stuff” in the winter.

You come out of work to go home, and find this.

I did that many, many, many times, but in worse conditions than that! That’s just a light coating. I lived above (still do in summers) the 45th parallel since the early 70s. My commute to work was 36 miles one way.

Honestly though, it doesn’t concern me now. I’m done with that.

Since that time, I will only use “the yellow” stuff for windshield washers in the winter. That includes both Rain-X and Prestone. Yes, they are more expensive

,
I’m pretty thrifty (No, extremely thrifty, like Yankee type.) so at Wal-Mart, close to spring, they’d clear out that winter washer fluid, often for 75 cents a jug. I’d buy six at a time and put it the garage.
CSA

Amen brother. But still better then the Syracuse area where I grew up.

And definitely better than North Dakota where I did a three year duty tour!
Been stuck in Syracuse in a blizzard. Yeah, they’re NASTY!

Plenty of good advice in the responses. Regarding M&S all season tires and true winter tires, snow and ice performance varies widely within each group but you can’t trust manufacturers claims so best to check Consumers Reports tire ratings when selecting, and they all require adequate tread depth. With 2WD cars (some FWD, some RWD) in the Sierra Mts. (Yosemite, Tahoe) I have had good snow/ice performance with the “M” brand (Fat tire guy) All Season M&S over several decades, including on slopes in bad conditions. A recent set of high end “P” (Italian brand) worked about as well and several relatives in ME like the “C” brand on their Subarus.

When I had my RWD '75 Starfire (like a Chevy Monza), that car was a handful to drive in the snow. I got my first set of Winter tires for that car. HUGE difference.

When my wife’s Saab was brand new, its FWD and M&S tires did OK. One year later, my wife complained about traction in the snow so I ordered up a set of winter tires on a second set of wheels. The wife was happy so life was good.

The experience with my 2WD Suburban on rather aggressive M&S SUV tires was very positive. Lots of ground clearance and open lug tires, no issues. Same for less aggressive M&S tires on my 4WD SUV’s that followed. Even with my 40 mile commute through snow drifts blowing off the farm fields. But I wouldn’t trust my RWD Mustang through that stuff without Winter tires.

I have had good snow/ice performance with the “M” brand (Fat tire guy) All Season M&S over several decades, including on slopes in bad conditions. A recent set of high end “P” (Italian brand) worked about as well and several relatives in ME like the “C” brand on their Subarus.

Just so that you are aware, the moderators on this site have no problem with forum members mentioning brand names–regardless of whether that mention is a positive one or a negative one. You really can state, “Michelin”, “Pirelli”, and “Continental”–as well as other brand names–without fear of being censured or censored.

Thanks, that always feels contrived.

I have had several brands of All Season M&S tires fail spectacularly on even the slightest snow or ice, at low speeds on level ground and with AWD no less. Can’t over emphasize checking the Consumers Reports tire ratings and/or with winter experienced users, preferably those who drive in hills or mountains.

I have had several brands of All Season M&S tires fail spectacularly on even the slightest snow or ice, at low speeds on level ground and with AWD no less.

Ditto!
My 2002 Outback came from the factory with Bridgestone Re-92 “all-season” tires, and their winter traction was so ridiculously bad that they were actually a hazard. That was the reason why I first bought Michelin winter tires, and the difference in traction was nothing short of… amazing.

Each year’s November issue of Consumer Reports has their tire ratings.

I hope you’re not suggesting that all that gets done every fall or before next winter. Following the owners manual maintenance schedule is all it needs. Batteries don’t need to be replaced just because they’re over 4 years old. Owners need to stop by an auto parts store or auto battery store each fall and have the battery load tested. It’s one of the great bargains in America - it’s free! Sometimes 3 year old batteries fail and in my case I’ve had batteries last well over 4 years.

Our 2016 Outback came with tires that were as bad as yours. The good folks at Subaru are complete boneheads - they sell you a car to go in the snow and then put tires on for gas mileage claims and smooth and quiet abilities. Subaru should make M+S tires a factory option if they cared about their customers.

Subaru should make M+S tires a factory option if they cared about their customers.

That’s the hell of it, because those incredibly crappy Bridgestone RE-92 tires ARE (or, at least they were…) classified as M&S tires. Ironically, those same tires were standard OEM equipment on Lexus ES sedans for several years, so even buying a “luxury” brand did not necessarily exempt one from being subjected to those ridiculous tires.
My 2011 Outback came with some sort of Continental “Contact” tires, and they were actually quite decent in winter conditions. However, they wouldn’t “hold” a balancing (even a dynamic balancing) for more than 5-6 k miles, so I dumped those Contis well before the tread was worn out.