What is this electrical plug?

Just wondering what this is on my 1.6L protege: 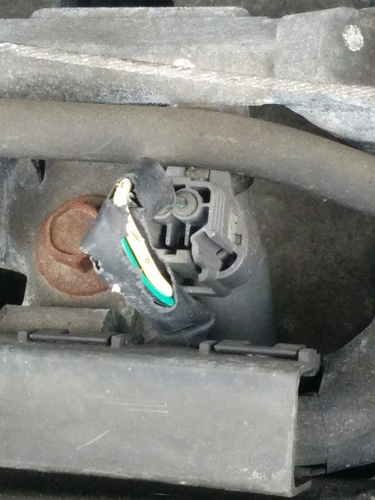 The insulation is coming off, so I duct taped it ( IM far from home ) , but I am hoping the individual wires won’t short.

Thanks and have a good night.

I have some silly comments… what year is your Protege? Exactly where is this plug you have photographed?

That looks like the fuel injector. The harness wrap is deteriorated or eaten by a rodent, that is not a problem as long as the insulation on the individual wires are ok, I don’t see any exposed copper.

On top of valve cover, yeah I should of thought of that before I duct taped all three wires.

Do you think it will short out? I need to get to work every day…

One of your threads ask how long this vehicle would last . I think you are close to finding the answer.

If it’s a fuel injector you’ll see three more that look just like it, all in a row along the top of the engine. If so, the engine computer sends electrical pulses through those wires to inject gas into that cylinder. If that current path didn’t work correctly, either no fuel would get injected or way to much; either way the likely result would be a very poor performing engine, noticeable shaking at idle, with the check engine light on probably, and a diagnostic code for a misfire in that cylinder.

This is not the biggest problem your car has. It’s not even the second biggest. On the scale of car problems, this is really small. Peel off the duct tape and wrap each wire separately with black plastic electric tape.

And what in your opinion would be the biggest problem? I would be interested to hear .

If we’re talking about the same car as in the thread you created here:

HI everyone, I am interested in knowing approximately how long my car will last for, in order to determine how much money to invest in it. Its a 2000 mazda protege 1.6L with 250,000km BODY typical rust patches around the wheel wheels Did black undercoating past few years. ENGINE Lots of carbon buildup on the valve guide—> should I seafoam? Installed new timing belt at 240700 (never installed water pump) Power steering pump squeals when I am taking the corner: Exhaust is good : no l…

then the abject lack of maintenance is your biggest problem.

I can’t tell from the picture, but it could be the plug for one of your oxygen sensors.

I’ll go along with another here, the problem seems to be prolonged periods of minimal maintenance. If you are going to try to wring many, many miles out of this car you really need to become more familiar with how things work and where they are.

None of us can help you look over your car to see what’s going on. Sometimes the best idea is to take a few hours and just look at things in, on and under the car, take photos, wiggle stuff, look for places where rust is destroying the car or where rodents are eating it. Look for oil and coolant leaks. Look for stuff that’s loose. The Owners manual is available for download online from Mazda:

Nope I maintained it well…must of been the owners before me.

Thanks George for providing a sensible and useful answer…always look forward to your posts.

I just looked up the previous discussion, where op posted pictures of a very rusty engine bay and a COMPLETELY sludged engine

But @Barkydog estimated it would last until April 19 of 2019

Nope I maintained it well…must of been the owners before me.

Please note that I didn’t say YOU failed to maintain it. I don’t know who neglected it, and really that’s immaterial. The fact remains that it was neglected, badly, and since you now own the car, that’s your biggest problem.

Actually now that I see your new thread on the rust, your biggest problem is that this thing is a pile of junk and it’s pointless to put any money into it beyond gas and maybe oil changes. Your car money should be going toward a savings account for a replacement.

Almost impossible to tell from this picture. A slightly broader view might make it easier. I’m not as worried as others about the wires shorting out. I think the tape was there originally more for housekeeping than electrical protection. What is curious is that the wires appear to be different gauges, or at least to have different insulation thickness, somewhat unusual in my experience.