What happens to the engine if a timing belt breaks?

Damaged is not the word, Destroyed is a better description. If you are past the time or miles for a new belt you are on borrowed time.

Thanks for the info and advice.

You can do anything you want. It is likely that there will be more than just bent valves. The piston that bent the valve probably needs to be replaced, and there could be several pistons involved. It is also possible that the cylinder wall could be damaged. With a lot of damage, replacing the engine might be the most cost effective cure. That might be too expensive on a 7 year old vehicle, hence the idea that the Odyssey is destroyed.

If the engine is idling when the belt breaks (that would be unusual), chances are good that it’ll just bend a few valve stems.

If the engine is cruising down the highway at 3,000 rpm or accelerating and at 5,000 rpm, the damage could include damage to the pistons, the cylinder walls, and even more. Chances under those circumstances are that the damages will exceed bent valve stems. Every event is different, each with its own circumstances and damages.

A friend of mine had a Volvo (I know not a Honda) that had a timing belt break in the middle of an intersection. After towing it to the mechanic… there was pretty catastrophic damage to the engine (valves, pistons, etc.) The repair estimate was around $3500, if memory serves, which was more than the car was worth.

The $700 or so you spend today, on your own time, will be well worth 1) not having your call stall in an intersection (or worse), and 2) damaging your engine needlessly.

In most cases the engine will not be destroyed but it will suffer top end damage; meaning bent valves in the cylinder head, etc.

In rarer cases it’s possible that pistons and/or rings can be cracked, rods bent, etc and in that case an entire new engine is needed.

From my personal experience, I’ve never seen an engine destroyed because of a broken timing belt. However, any interference fit engine always needed cylinder head work and some dressing of the nicks in the tops of the pistons. The nicks should be smoothed out to prevent hot spots and detonation during engine running.

My 100% literal answer to OP’s question is that the engine will quit running 100% of the time.

The $700 you quote seems low. I paid that in 2012 for a Honda timing belt at the dealer, and that was the lowest quote. I agree that replacing the timing belt is wel worth doing, and I would do it very soon.

According to what I see, Honda’s 3 and 3.2 L engines are non- interference; and the rest are interference. Honda Odyssey’s I’m seeing use a 3.5 L engine, so it is the interference type. You don’t want to have the timing belt break.

This is one of those situations where you are going to have to spend the money sooner or later if you keep the car. If you do the job now, you won’t be worrying about it for the next however long it takes before you spend the money. Or worse. So, sadly, it’s time to start shopping.

My understanding of the OP’s post is that he/she is asking how necessary a timing belt change is, not that his/hers broke. I would submit that it’s time to start price-shopping to get the job done ASAP rather than car-shopping for a replacement.

Timing belt replacement is expensive. And, frankly, too many times having the work done ends up with problems that didn’t exist before. Experience has proven that it isn’t a foolproof procedure. I don’t recommend trying to avoid it, but I can understand why so many people do. I’ve long believed that cars should not be designed with this expensive a periodic maintenance procedure, especially one so problematic. Manufacturers used chains for so many years because it’s cheaper, but to me it simply transferred the cost to the consumer. I believe that a manufacturer investing in a timing chain system up front and charging a bit more for the cars is an investment in reliability and customer satisfaction. Fortunately, timing belts are becoming more rare with each passing year.

With a timing belt, the manufacturer provides a service interval.

With a timing chain?

There is no service interval from most manufacturers.

So the vehicle is driven until the timing chain system fails.

Here’s a timing chain set for a Nissan 3.5L engine. 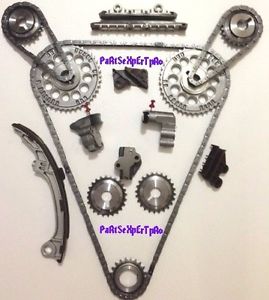 If any of those components fail, you end up with bent valves.

Hell! If a 302 Ford engine has a timing chain failure, it can end up with bent valves.

Yeah, but Honda insists on continuing to put them in their van and trucks. The timing belt is why I’m not looking at a Pilot or Odyssey to replace our minivan. I guess they will continue to use the timing belt in their V6 engine until people stop buying them, but I don’t think most buyers consider it at all.

In all my years, I’ve only had one timing chain fail, and that was at 200,000 miles. Other vehicles I’ve driven for hundreds of thousands of miles without failure. Admittedly, I didn’t take as good a care of that vehicle as I should have.

To me, that really DOES matter.
To each his own.

In all my years, I’ve only had one timing chain fail,

Now work on many vehicles over many years, and then you’ll see how common timing chains stretch/fail.

I get a big laugh out of those that say timing chains last the life of the engine.

If that were true, why is it you can purchase replacement timing chain sets? 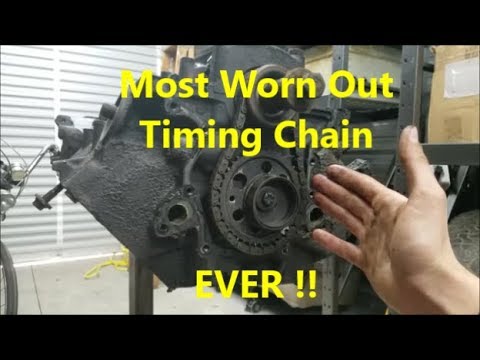 Just speaking for my personal cars and having owned many, I’ve never had to replace a timing chain.
Then again,I’m religious about regular oil changes.

My best was the '87 Sable I had with the 3.0. The car was sold (dirt cheap) with well over 400k miles and still having the original chain in it.