What can cause build up on radiator cap?

I bought a 2004 v6 Mustang and noticed that the coolant was a dark orange color so I changed it to the green coolant. At the time, the radiator cap had a lot of build up on it so I wiped it off. Now it’s about 3 weeks later and the build up on the radiator cap is back. What could it be caused from? Thanks. 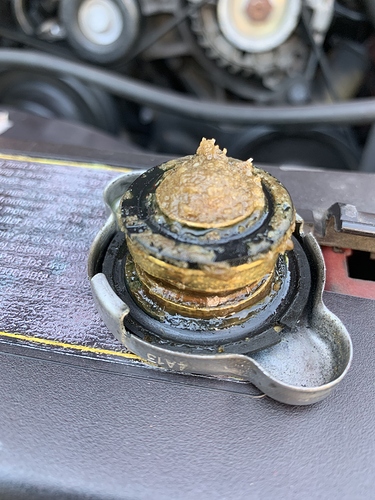 It is likely caused by the incompatibility between your Ford Orange coolant and the green coolant you put in the engine. They are not the same. Orange colored coolant is not “bad” or worn out coolant, it is a special type. They should not be mixed. You need to flush out the engine until all that fluid has been removed, replace it with Ford compatible fluid and probably flush it again in 6 months.