What are you thoughts on this salvage title car? 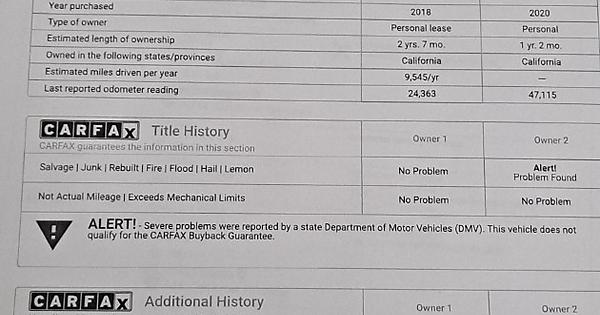 It is 15k with 47k miles and a negotiable price according to them. I am not sure what happened to the car but the carfax report shows minor and moderate damage maybe someone has a better idea on this? It is located in Sacramento

I would never consider a salvage title car. But that’s me.

It does not qualify for the Carfax buy back . That is enough for me to pass and look for something else.

I would suggest that you run fast and far away from this “deal”, because the potential savings just aren’t worth it. Not for something this recent.

It all depends on what was damaged, and if it was repaired properly for you to own it. If you plan on keeping for a long time, then the resale value with it having a salvage or rebuilt title won’t affect you. I’m not sure how full coverage or comprehensive is affected. Sometimes a stolen vehicle will have its VIN changed and it will be sold using the title from a vehicle purchased out of a junk yard. Look for the VIN that is stamped in to the chassis in various places to see if there is any sign of alteration.

It was a total loss so that is no minor damage. I’m not saying it is two cars welded together, but who knows? And you’d have a hard time selling it again.

The other one actually looked like a cream puff.

If there is a slight deformation in the unibody frame they’ll say it’s a total loss. Somebody could buy it and fix it up to look nice while still having the unibody bent 1/4" somewhere. If it looks fine and the wheel alignment is still correct I guess 1/4" doesn’t matter too much.

The repair quote is always how much it would cost to make everything perfect. A $3000 car with a dented quarter panel might cost $3300 to fix so it is a total loss, but the car can be used just fine with the dent and it’s still worth $2100 with the dent.

I would run far away from this car. Your insurance company may not be willing to insure a car with a salvage title. Mine won’t.

If it looks fine and the wheel alignment is still correct I guess 1/4" doesn’t matter too much.

On the other hand, such a car could have significantly reduced protection in another crash. I personally wouldn’t take the chance on that.

The front AND rear quarter panel damage makes me wonder if this was firmly hit in the right rear and then pushed into or between some thing else, making it a good candidate for a twisted frame.

On the other hand, such a car could have significantly reduced protection in another crash.

Not at all that’s ridiculous. 1/4" out of a foot or two that it could be smashed in? That’s hardly significant. A vehicle that has significant rust damage under it will have reduced strength in a crash. Why aren’t you more concerned about that?

But you bring up a good point. The person who rebuilt the vehicle could have repacked the deployed airbags. The junk yard here won’t sell any airbags at all because of some recall. If that’s going on nation wide then it’s more likely that someone would repack the airbags instead of putting new ones in.

1/4" out of a foot or two that it could be smashed in? That’s hardly significant

I’m not sure that I agree. A “body on chassis vehicle”? Sure no problem, they rwist more going around a slow corner.
A light, stiff UniBody on a vehicle damaged on 3 out of 4 corners? Not without seeing the damage before the repair and knowing the competance of the shop that did the repair.
Otherwise you’re just buying a pig in a poke

If you are asking if a label or some kind of tag is placed on a salvage vehicle itself I have never heard of that . I think the title is all that is used to show salvage. A label or tag could be removed easily .

Most recently salvaged cars will show up if you Google the VIN. Doesn’t look awful, but generally salvage cars are only worth it if you are getting a huge discount.

In my opinion, insurance companies have good reasons for totaling a car. A friend had a 1996 Ford Taurus wagon that got sideswiped in the driveway at another friend’s house about six years ago. The damage was cosmetic. The doors still opened and closed properly, none of the glass was broken, the power door locks and windows worked perfectly. Yet, the insurance company of the person that sideswiped the car totaled the car. My friend kept the
Taurus and found a body technician who did work on the side and she had the damage repaired. I did not understand why it was totaled and why this friend went to the expense of having the body work done when it was an old car anyway and she used it as a second car for hauling. A year later, she told me her mechanic would not put the car up on his lift because the undercarriage was too rusted. I convinced her to dump.the Taurus wagon. She sold it to her mechanic for $100. He pulled the engine for another car and junked the rest. The insurance totaled the Taurus because it wasn’t safe to be on the road.
This same friend had an old Honda Civic she inherited. She had this Civic while she had the Taurus. Her brother was in town visiting her and this Civic was hit and the insurance called it totaled. This friend bought the Civic back and had a moonlight body repairman fix it. I could see severe rust around the rear wheel wells. The car was hit in the right front. A couple years after the accident, my friend decided to buy a new car and trade in the old Civic. I went car shopping with her. The old Civic had the motorized seat belts and the seat belt on the passenger side quit working so she just cut the belt off. I hated riding in that car. She got a good deal on a new Honda Civic. The dealer gave her a great trade-in allowance for the old Civic which was really the discount on the new Civic. The salesman claimed he had buyers standing in line to buy her old Civic. The old Civic really went to the junkyard where it belonged.
Fortunately, my friend is now down to one car, the newer Civic. I think she was attached to her old cars, but she didn’t miss them when they were gone.