Paice LLC sued Volvo for patent infringement for utilizing high power hybrid technology without paying the inventor, Paice, for it. You’d think Volvo might have learned from Toyota when they were successfully sued by Paice for the Prius hybrid tech. I read about it in the Baltimore Sun. You can find it there if you want, but they might charge for it. The references below gives a brief outline, then links to the Sun article. Oh well, it’s just Geely’s money. They can waste it any way they want, then pay the royalty.
Comments? 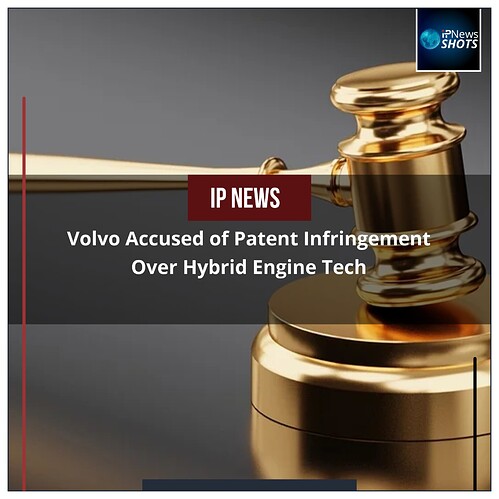 Paice LLC and The Abell Foundation Inc. have filed a lawsuit against Volvo Car Corp. at the US District Court for the District of Maryland. The plaintiffs assert that Volvo refused to license the patent for the hybrid engine technology that they are...

Hmm, they knew the patents existed sooo treble damages are assesed if they lose. And seems pretty likely they’ll lose.

I suspect the Chinese owners, Geely, commanded the Volvo management to take that stand.

I suspect the Chinese owners, Geely, commanded the Volvo management to take that stand.

I’m sure they did. It would match the way Chinese companies ignore most other patents.

I have a friend that is in top management for the US arm of a Chinese owned company. His experiences confirm that attitude by the Chinese owners.

I’m sure they did. It would match the way Chinese companies ignore most other patents

Oh it’s not just the Chinese. The US companies are right up there near or at the top of patent infringements. Especially in the telecom and tech world.

Oh it’s not just the Chinese. The US companies are right up there near or at the top of patent infringements. Especially in the telecom and tech world.

And allow me confirm it’s not just a Chinese or American thing. It seems to be more of a human thing.

That’s because we let them off easily. The Sackler’s paid a big fine, but have not been charged with drug trafficking. No corporate executives were charged with malfeasance in the mortgage meltdown of 2008. No Wells Fargo executives were charged for scamming their customers when they created unauthorized accounts in their names. Nothing. It’s a societal norm because we let it be so. Enraged? Tell someone in power, and if enough citizens do so, politicians might change. They’re happy to take big contributions to buy their ignorance.

The US companies are right up there near or at the top of patent infringements. Especially in the telecom and tech world.

I’ve read that some tech companies expressly forbid their engineers from patent searches. Why? Because if you can prove, in court, that the company had no knowledge that the patent existed and developed the infringing solution independently (yeah, right!) the damages are single, not treble.

That sets up liability that plays out this way…

The only downside risk is being sued and proved to have known about the patents and pay treble damages. They are tossing ethics aside and risk managing the process.

I’ve read that some tech companies expressly forbid their engineers from patent searches. Why?

Years ago I worked for another telecom company. And this one product I helped design we applied for at least 10 different patents. But the design had many other features that were our competitors had patented. Before we went to market our engineering legal department looked into the patent situation. They looked at our top 3 competitors on this product and all their patents and compared to our patents. It was a complete mess. We were using their patents…they were using our patents…Legal said it would probably take each company 30 years in courts to fight all the patent infringements and no one would eve win.

The only ones who ever win any patent infringements are the big guys who squash the small guy.

No point in legal action as the penalties on each side would likely offset. The only winners would be the lawyers!

That in itself is a strategy. One used when I worked at a large automaker. Patent early and often even if you don’t plan to USE the patent. That allows a stalemate much like experienced at your telecom. It can also misdirect your competition as to your actual design path. Given that patents changed to “first to file” from “first to invent,” speedy filing is more important than ever. To compensate for the 4-6 year filing process, the patent life was extended to 20 years, like most of the rest of the world, rather than 14 from issuance. It greatly increased the volume of patents hitting the USPTO!

I helped change my last company’s patent strategy towards patenting early rather than waiting until the design path was clear. It costs to file as well as maintain a patent. If you find you didn’t use it, you could always stop paying the fees and drop the patent rights. They were very concerned about violating others’ patents and aggressive about violators of their own patents.

The patent examiners are paid to review the filings and reject those that are trivial, previously patented or are in the public domain. They clearly don’t do that good a job.

No Wells Fargo executives were charged for scamming their customers when they created unauthorized accounts in their names.

I have no legal experience . . . but what you brought up sounds criminal

I have no legal experience . . . but what you brought up sounds criminal

Their local branch employees were badged to the point where they would push unneeded services on customers. When I would go into my local WF branch, the assistant branch manager would repeatedly attempt to have me sign up for extra-cost overdraft “protection”. My answer was…
Okay… take a look at my account record. In 22 years, have I EVER overdrawn my account?
In response, she said… No, but you COULD.

Before exiting, I told her, “Yes, and the sky could fall tomorrow, but the probability of it happening is… minimal. Do you have sky collapse insurance to try to sell also?”.

Do you have sky collapse insurance to try to sell also?

Am I insured against asteroids, meteors and falling satellites? | III