Hello, I bought a new’16 RAM ecodiesel two years ago and am really tracking up the miles on my commute. I know not very smart. I am currently about $4000 upside down on the loan. Yikes! I did not put any $ down though. It’s been having some mechanical issues that aren’t giving me much confidence in its future. I’ve been looking at a used Prius or with less than 75K miles and around $9k. Between reduced payments, insurance and fuel costs I’ve calculated savings of $5-600/month. Is it worth it to pay my way out of my truck? Keep in mind I put enough miles on my commute that I wold be well over 100K miles before I could break even. I estimate another two years to break even. Also my wife will require a different car in the next 10 months and I don’t want two big payments.

I don’t think I would use a Prius for a commute that has a lot of miles and certainly would not buy a used one . Two years to break even , does that cover tires and possible repairs . I assume your wife would not like driving the truck.
You could have CarMax appraise your truck and see what they would actually pay you for it. They do better then dealer trade in offers but not near a private sale.

If your commute is in lots of stop and go or slow traffic, a Prius makes sense. They are very popular as taxi cabs around here. If you’re comfortable in one, not a bad choice at all. Maybe even look for a used Leaf if your commute is less than 75 miles round trip.

The best money you can get on a used vehicle is almost always a private sale. It might be worth a try.

Thank you. My commute is 90 miles RT with no traffic. and almost all highway. That savings I mentioned would not cover maintenance which would only cost more by keeping the truck. Oil changes are $125 alone! Obviously I’m making up for a past mistakes but I believe the math checks out in the long run. Looking to get the most bang for my buck for $8-10K. Also my wife would not drive the truck as she commutes 50 miles 3 days a week.

I wouldn’t get a hybrid for that commute, they do little better on the highway than an economy car (I have a hybrid). Something like a recent model Civic should do well.

I’d pay off the truck by increasing the monthly payments as much as reasonable. Once you’re well back above water on the loan you’ll be in a better position to trade or sell/buy.

Thank you. If price and mileage are equal is a hybrid that much more of a risk? It seems as if their hwy mpg is at least comparable to a civic. Is the battery just a time bomb? Seems as if we all agree once I’m even or better it’s worth it to jump to an economy car.

Highway fuel economy for a Prius is 10 to 12 MPG better than a Civic.

A little web searching might find a questionnaire that will tell you if a hybrid is a good choice for you . I took one once and it showed that I would not really benefit that much from a hybrid. The battery is not a time bomb but they are expensive .

Highway fuel economy for a Prius is 10 to 12 MPG better than a Civic.

This is why I wouldn’t trade for a hybrid. You get the most advantage from the hybrid system in city driving.

The battery is not a time bomb but they are expensive .

With Civic hybrids of certain model years, it is a time bomb, from a financial perspective

It’s not a question of if they will fail, but when . . . and it could very well be at a shockingly low mileage

If I were buying a hybrid, I wouldn’t buy a Honda

That is also speaking from professional experience. We have both Prius and civic hybrid in our fleet, and the Prius by FAR has the more reliable battery pack

It will cost you thousands to buy a commuter car reliable enough, and it will same you hundreds. I’d just keep driving the RAM.

That is sort of a high priced truck and will probably depreciate by $10,000 over the next 2-3 years, there will be much less depreciation with a $10,000 car.

your loan is 4k more than dealer will give you now? this dealer wants 36k for same truck as yours. yours is 4wd? suppose 2wd is cheaper. what is insurance cost for full coverage vs same coverage for prius? our 15’ civic is 60/mo. 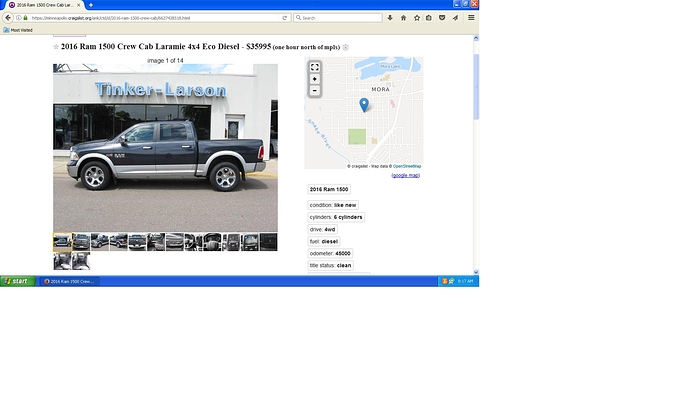 I’m just trying to organize my thoughts. I guess the primary issue is that you need a vehicle(s) that fit your needs. When I drove a lot of commuter miles I had a standard comfortable Buick or Olds but then put multi-hundreds of thousands of miles on them-like 240K, 350, 480, 530, etc. After the first hundred thousand or so they aren’t worth much but who cared?

You can easily get upside down in a new car by driving a lot of miles. So you either keep driving it if it fits your needs, or get rid of it for something that does fit your needs and take the hit. In a long commute car, the most important thing is not economy, but comfort. Most every decent car now gets 25-30 mpg. You don’t need a hybrid, etc. to get to the 40 or 50 mark for the economy of it, in my view. Dollar wise it doesn’t make much difference over the long haul, but you need a car that is reasonable to fix and drive.

So no magic answers and everyone has to do what feels the best for them, but the first thing is to match the vehicle to the needs, then get out of the hole.

I think if I had this problem I would start driving the vehicle the wife is using ( unknown ) and instead of waiting 10 months to get her one I would take the loss on the truck and just get it over with.

I have a friend who has a 100 mile round trip commute five days a week. She also has parents who are in their 90s who live 125 miles away, so she makes frequent trips to see them. She started this job last fall and had only been on the job two weeks when a delivery van swung too wide pulling out from a cross street and hit her car, a Honda Civic, head on. The Civic was totaled. She replaced the Civic with a Toyota Prius and since last September has racked up 23,000 miles. She thinks the Prius is great. Of course, she was coming from a Honda Civic. She is also about 5’ 4" and weighs about 110 pounds, so she fits comfortably in a small car.

She is also about 5’ 4" and weighs about 110 pounds, so she fits comfortably in a small car.

Not sure I understand that statement . Just because the car is small ( don’t really think a Prius as small ) does not mean a larger person can’t be comfortable in one. I am quite a bit larger than the 110 lb. person and I am comfortable in my friends Prius.

Even when your current car is an unreliable gas guzzler, the sound financial choice when you owe more than it is worth is to keep driving it until it’s paid off. Only you can decide whether it’s worth it to say goodbye to $4,000-5,000 by trading it in now. Keep in mind trade-in value is lower than actual value.

I’d keep driving what you have until you have no other choice or you can sell it for more than you owe.