Hi there
I’m looking to upgrade my Renault Clio speaker system. My intention is nothing too permanent or complicated like fitting a huge amp and speakers in my boot. My end goal is to have speakers I can turn to full power without horrible noises coming from them!
My current speakers in my Clio can only go to about 2/3 power before this happens.
Now, as I would rather not fit an amp, I was looking at aftermarket speakers, like the JVC csdr520 and fitting them in place of the stock speakers, the specs seem similar with the aftermarket’s having slightly more power.

Would this making a meaning full difference or is it work buying a cheap amp that I can stash somewhere in the dash? Don’t want to waste my money!

As said before this is mainly a United States forum and members that are familiar with Renault are few and far between . If you really want your money to be spent wisely then find a local sound shop and let them guide you.

You might look at the Crutchfeild web site but I don’t know if they service wherever you are.

Speakers will provide the biggest gain. And you generally get what you pay for.

They are the very last thing before your ears. Speakers accept power, they don’t make power. You just need a power rating higher than your amplifier can produce.

You just need a power rating higher than your amplifier can produce.

+1
Right now, the OP’s speakers are being “overdriven” by the amp’s output. But, I do give him credit for recognizing the problem. All-too-often I hear incredibly distorted “music” coming from overdriven car speakers, and apparently the people driving these cars don’t recognize the distortion coming from their overdriven speakers.

Drives me nuts sitting beside them even with everyone’s windows closed!

Any idea where/how I can find out my max power draw for my current radio?
The part number for it is 281154149r
Not a huge amount of information is available!
Is it just easier if I get an small amp so I can say for definite my output power?
Thanks
Jacob

I’m not that technical when it comes to audio, but when turning the volume to max, and play a semi bass intensive song, the distortion drowns out the entire song, sounds horrible.
I assumed it was drawing too much power, which is why I keep it safe and at a lower power. But not sure how I would fix this issue
Thanks
Jacob

Is it just easier if I get an small amp so I can say for definite my output power?

No , getting an amplifier will not solve this problem . Of course you don’t say how old this vehicle is so the whole sound system could need replaced. First step get good speakers and that may solve your problem .

Most OE car amps put out less than 20 watts a channel. Don’t overthink this. Most aftermarket car speakers can handle more.

The amp will do nothing for you except make it louder.

I assumed it was drawing too much power

No, speakers don’t draw power. The amp produces it. Your speakers distort because the amp is shpplying more power than the speakers can handle. If what you want is just more bass… which you only mentioned later… add a sub woofer and amp combo in a box you can mount in the trunk or rear of the car.

Sorry I’m probably not being too clear.
I just want clear sound!
And being able to play music at full volume and not worry about blowing my speakers or hearing horrible distortions
If getting high wattage speakers will fix this issue, that makes my life a hell of a lot easier!!

And being able to play music at full volume

Which will also damage your hearing .

That’s not a problem to me

But hopefully I made sense, would be nice to have a working sound system.
Also the car is only 9 years old so I kinda expected this to be fairly standard?
Maybe I’m just naive

Without knowing your amp’s specs, we don’t know if it’s you speakers distorting or the amp. But if they’re both original basic equipment replacing the speakers sure won’t hurt.

You’ll want to get the higher efficiency speakers to keep your amp from working too hard.

That’s not a problem to me

Well you are wrong . Hearing damage can be a real problem if not now but in the future . Good music sound is not just how loud it is but the clarity .

+1
During his college years, my nephew was a manager at a bar featuring very LOUD live acts. Even though he was usually a few hundred feet from the speakers, his hearing was very badly affected.

I wished you would have given me that advice 45 years ago. It would’ve saved some valuable hearing I don’t have now. On the other hand I wouldn’t have listened to you, I’d just wait until I got older and regretting it.

Or maybe the radio itself is bad enough that it just can’t provide a clean signal to the amp section at higher levels. In this case adding an amp will just amplify the existing distortion.

For us US folks, the Clio is like a VW Golf. Is this what your dash looks like? 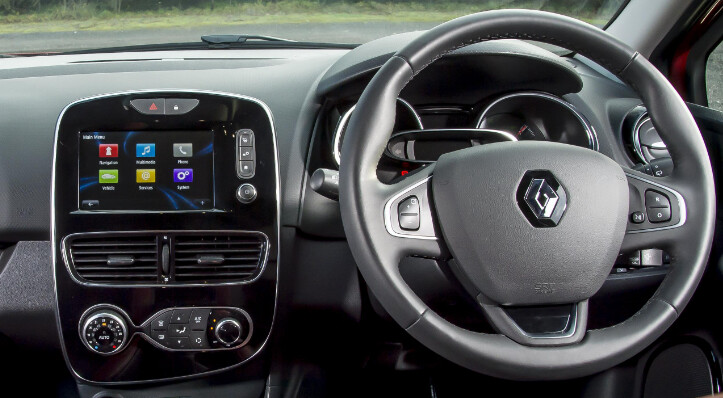 image723×398 89.4 KB
If so, it might be difficult to upgrade the head unit/amp, but I bet a Clio forum would have some suggestions.