I got an education today on the original Vulcan plugs and coil bank. Here is the poop! …
Page 180 in the original owners manual shows AWSF-32PP(** ) as the customer replacement plug. It was the plug that replaced the 2 different plugs originally installed at the factory. Yes, the factory originally had 2 different plugs in the Vulcan engine. Most people eventually got plugs changed so thats why you don’t see engines with 2 different unique plugs anymore unless it’s the occasional low mileage “Granny only drove it to church and back.” vehicle. The parts counters would ONLY sell PP plugs as replacments. The (**) is attached to the note below.

The manual states…
“If a plug is removed for inspection it must be reinstalled in the same cylinder.
(**) Cylinders 1,2,3, have a PG suffix, cylinders 4,5,6 have a P suffix. If plug needs replacing, use only a plug with a part # suffix letter PP as shown on engine decal.”

The PP, P, and PG plugs obviously aren’t made anymore which is why actual “OEM” plugs don’t exist and never were able to be purchased. P and PG plugs were not available for customer purchase. They were ONLY supplied for the original factory install.
Here is what I found out…
Ford used a Waste Spark system. The coil pack sparks TWO spark plugs at the same time. 1+5, 2+6 and 3+4 are the match pairs that spark at the same time, their pistons are both at TDC at the same time, one on exhaust stroke the other on compression stroke. The spark happening on exhaust stroke is “wasted” so hence the name Waste Spark system. In order to fire two spark plugs from one coil they need to be wired in series, so… One spark plug sparks from center to tip, normal spark,
the other sparks from tip to center, reverse spark. This is why there are two spark plugs listed, one has platinum tip and the other a platinum center, so both are single platinum but reversed coatings. This saved Ford a lot of of money by not having to make a more expensive plug as an original install. The replacement PP plug was more expensive due to more coating and connection points but the money they saved on the single use original plugs was worth it. Motocraft SP-432, gapped at .044, is now the standard plug that most Ford dealerships install and recommend in the Vulcan engine. Motocraft is now made by Autolite and just branded differently so either equivalent is fine as a replacement.

Also, I did get new wires and inspect the coil pack. Helena is running great!!! “Helena” is her name. It’s an Orpan Black reference. Great series! NOT a PG show in the least so keep the kids away or don’t watch if violence and “so called” adult situations offend you. Fair warning!

Anyway, thanks again for all the help folks! Planning a trip with Helena, from Houston to Phoenix, within the next few weeks. Will keep you posted as to how she runs or will yell for HEEELP if anything happens.

Thanks for the update. That is information I never knew and it never hurts to learn something new. Granted, I admit I don’t fully understand the center/tip thing as electricity generally travels from ground to positive. Much like lightning in a thunderstorm, the part of the flash you see is actually from the ground to the cloud even though it may not look that way.

Nissan also used a wasted spark system and Harley Davidson has used it forever. No matter, it works.

Oh cool. That’s also something new I learned today. I didn’t know that Harley and Nissan used that. I had never heard of the “waisted spark system” before I saw it the other day. Do you know if that was a “turn of the century” thing in automotive technology? Who has the nitty gritty on this? Now you have my interest peeked and I have to do some research later. Of course Harley Davidson was founded in 1903 so… interesting. Anyway, Thanks

Harley started using the wasted spark in 1909 when they came out with their first V-twin engine. Prior to that the engines were single cylinder. I think modern Harleys use a dual spark coil without the wasted spark Modern defined as the Evolution style engines used since 1984 when the Shovelhead was phased out.

I don’t remember Nissan as being a true wasted spark system. Both plugs fired on compression but one plug (2 per cylinder) fired milliseconds after the first. I think this was done to prevent detonation of any incoming fuel/air due to valve overlap and to aid emissions.

What i used to do with my Shovelhead Harleys is remove the heads, machine some fins out of the right side between the pushrod tubes, drill/tap a second spark plug hole, and add a second plug and ignition coil. Amazing difference.
Eliminated all signs of pinging, picked up 3 MPG on the highway, and the spark plugs stayed clean for far longer as compared to a single plug setup. Really made a vastly noticeable difference.
It was still a wasted spark setup; just doubled with 4 plugs doing it instead of 2.

Waste spark systems became common on domestic vehicles starting in the mid to late 80’s. Nothing new or exotic about the technology.

Waste Spark has been around for a long time, this old lawn mower even has it 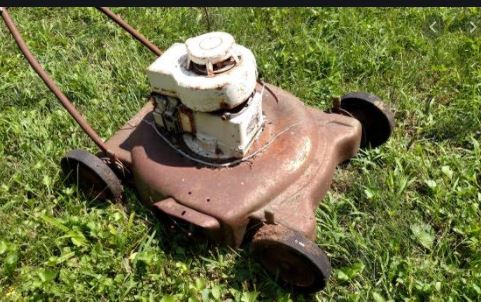 It does need a good flame paint job and some fuzzy dice hanging off the choke though. Lol