Check your fuel tanks for water, it reall plugs up those fuel filters.

Water in the fuel system is a theory I’ve completely eliminated.

I’ve just purchased a camera scope to inspect the fuel tanks… but I’m not expecting to find any water since it has never been detected.

Fire department showed up and cut the fuel lines- but the engine kept running until it ran out of oil. So I’d say don’t run it too long with a leaky oil seal if that is what it ends up being

Probably. But it doesn’t explain the cloud of blue smoke on start and smoking engine while running.

Is this a saltwater boat by chance? Have you kept up on your zinc replacement? If not, have you checked the props for corrosion?

Yes. Yes. and Yes. The vessel was hauled out last week. The entire bottom was completely cleaned.

He’s got twin engines, so I’d guess two props. It’d be odd for both props to have the same problem.

Correct. When the vessel was “on the hard” last week the props, rudders, everything was cleaned down to the brass metal, polished, and painted with antifouling. The props and etc are in nearly new condition. No scratches or issues.

It’d be just as odd for both engines to have the same problem.

That has been a running theme. We could say that whatever happened to cause this issue is something that affected both engines simultaneously. If we were to ask - what did they do simultaneously? They did nothing. They sat for a long time.

I’ll check on the turbo return line soon. Hopefully that will be it.

I think it’s helpful to simplify the problem by removing the transmission, props, etc as factors. The engines smoke in neutral. Before the engines are under load, in gear, or moving. A big cloud of blue smoke on cold start… and then continue to smoke once warm.

A possible clue is the very high oil pressure.

. A big cloud of blue smoke on cold start… .

Again, no Hino experience here- but smoke on a cold start may be a bit normal for a 30 year old engine without glow plugs (which I am assuming an inline 8 does not have glow plugs.) if it does have glow plugs, check them all.
all the internal seals are 30 year old, and emissions standards of that time didn’t require a smoke free diesel. ( took an '87 thru once in the mid to late '90’s, that when I revved it up on the dyno, it blew so much smoke that people had to go outside the facility. It passed. It also got a new engine shortly therafter, lol)
but- oil in the air cleaner concerns me more than anything. Figure that out, and it may just take care of some of the other stuff- or a good run on the lake may help.

Well, if they’re both doing the exact same thing, then it’s gotta be something that happened to them simultaneously. Maybe an oil issue (assuming the oil was changed at the same time - maybe whoever did it used the wrong stuff?), or something else that someone did to both engines. Before you had it pulled out for the cleaning, was it doing the slow thing?

There are Hino diesel discussions and sites:

I just tried to yank off the oil return line from the turbo. I don’t know why I expected a rubber oil hose but… they’re metal. I think it’s aluminum. Bolted on like a header.

I won’t be able to simply blow in compressed air… so I’m removing the metal line to inspect it. It connects right to the block next to the pan.

I’ve released 3 bolts but one is putting up a fight. Even my trusty impact driver failed to release it. Soaking it in PB Blaster now. I may need to buy a more powerful driver…

It’s an inline 6 though. I have not removed any glow plugs, serviced injectors, or adjusted valves. I’ve been primarily trying to figure out why the turbo appears to be puking oil.

Before you had it pulled out for the cleaning, was it doing the slow thing?

This was an issue when I purchased the vessel. Since then I’ve changed all 4 oil filters and drained the oil. I agree that it’s reasonable to conclude that whatever happened to these engines was simultaneous.

The oil in the air cleaners is what concerns me,

Have you tried running with out them ?

Great ideas… But turbo oil return line is clean and clear. Goes in to the pan… no restrictions.

I removed the valve cover to check for evidence of sludge on the top side… Nothing. Clean.

Just put everything back together. Fired it up and… Well, same old blue smoke. And sky high oil pressure. It will stay this high no mater how warm the engines get. 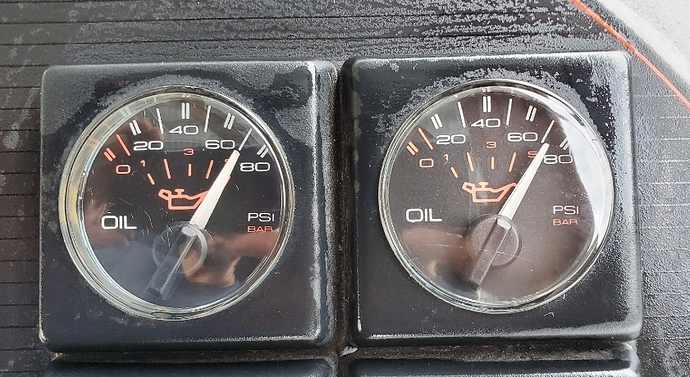 Have you tried running with out them ?

I have not. But that’s a great idea. I picked these “Specter” air filters up at an Oreilly’s. They’re generic “performance filters” for automotive. I’m assuming they have the flow rate good enough for this diesel but… who knows. I’ll try running without them.

What is the engine temperature when fully warmed up?

Is this a new to you boat ?

as to your max speed,
Are the props the correct size and pitch for the size and weight of the boat and the power of the engine ?
To small of prop will wind out the engine and not go very fast.
To big of prop will not let the engine reach upper RPM and you won’t get any speed

++ on the props @It_s_Me. And the only way to find the ideal prop was trial and error for me on a pontoon boat. I swapped out used props with a dealer until I found the best pitch/diameter and bought a new one of that size and kept the test prop for a back up. But I would have imagined that a 30+ foot sea worthy boat with twin diesels would have well suited props on it but the power/RPM issue is indicative of being too wide and too fast.

But what about the smoke? Something else is wrong.

I’d pay a good marine diesel mechanic to figure this out.

The hose does not lead directly in to the intake… it just vents gasses outside of the filter.

I don’t think that is something I’d want, the fumes would build up in the engine room.

Every little bit of progress is part of the solution… even if there’s more work to do. I’m having a beer and reflecting on the situation.

Is this a new to you boat ?

New to me as of the beginning of this year.

The props are original… I would expect the designers to have worked out the gearing vs torque vs hull design properly.

I don’t think that is something I’d want, the fumes would build up in the engine room.

Now that you mention it… I think you’re right. Wonder why they left it like that. There’s clearly nowhere to connect it. Maybe they expect the intake to absorb all the fumes.

What is the engine temperature when fully warmed up?

A compression test could be the thing to do. I think the glow plugs are behind the intake manifold… So not accessible. The injectors are right on top. But I think the injectors need a special puller tool. Then I need to figure out how to shut off the injection pump. And I’ll need to prime the fuel system after I’m done.

In the schematic you provided, item 15 is the oil filter by-pass.

If you the look at the drain back to the oil pan from the oil filter by-pass , there’s an orifice of some kind.

With the oil pressure thru the roof, I wonder if that’s where the problem lies?

19 also appears to be a (pressure) regulator valve.

I read the schematic to mean that #15 was a filter for oil bypassing the full flow filter when pressure was high.

When both engines are operating identically it’s hard to imagine that the concerns here are the result of some failure. Simultaneous identical failures seems to be very unlikely while identical maintenance procedures or alterations seems the more likely cause or possibly the engines are running as expected for 30 year old diesels.

From what I read, 70 psi oil pressure is normal. Anyone have specs that say it isn’t?

1 of my engines reads around 60psi and the other hovers around 48psi. It will usually creep up and stay above 50psi once I increase the rpm. Is this normal?