I currently own a 2002 ram 1500 4.7L (287 cubic inch) and I want to add a turbo to the system, so it tows better, what size turbo would I need? Open to suggestions, truck currently has a 5 speed dual clutch manual transmission, with 4.10 rear axle gears, throttle body spacer, and chip, plan on getting load help bags, and cold air intake for it too, any suggestions for what turbo would be most effective

You don’t list how often you tow , how much weight or how many miles on this vehicle. If you tow a lot then trading for a more suitable vehicle would be the best choice.

These items will cost a lot and may not even help . At least forget the cold intake as that is a waste of money.

any suggestions for what turbo would be most effective

The most effective “turbo” would be to trade the truck for a Hemi V8 or a Cummins diesel.

There don’t appear to be any turbo kits available for this engine so one would have to be custom built at significant cost. And you are installing it on a 17 year old engine with ??? how many miles? You wouldn’t be building horsepower, you’d be building pile of broken connecting rods, a bent crank and a broken engine block.

The horsepower gain when adding a turbo to an engine is not worth the effort. I recall that a 2psi boost is all that can be added and intercooling is necessary and possibly 94 octane gas to prevent detonation. As often is the case “the devil is in the details.”

When a 17-year-old 4.7 liter engine that is rated at 240 hp isn’t putting out enough power, the solution to your problem is not to add modifications that will stress the engine more and make it age faster. The solution is to trade the truck in for one that suits your needs.

Unless I’m way off base, that truck did not come with a dual-clutch transmission. Did you add one aftermarket? If so, that’s very likely to be your biggest weak spot in a whole field of weak spots for towing with this vehicle, turbo or not.

a 2psi boost is all that can be added

Is that 2 psi all that can be added to a 4.7 L V8 or to a non-intercooled turbo system? Curious why you think that.

I owned a factory non-intercooled turbo Ford 4 cylinder pumping 13.5 psi (and I uppped it to 17.5 psi

). It did require 91 octane minimum but I typically used Sunoco 94

I recall investigating adding a turbo to a Toyota for someone and the 9 to 1 compression ratio, without an intercooler ~2psi was the limit and the site discouraged adding boost to most high compression engines because of the minor increase in power compared to the cost of installation and operation once installed.

But the general consensus hasn’t changed in recent years. Long ago it was understood that the potential performance available from boosting an engine was largely dependent on the engine being designed to be boosted and lower compression ratios were necessary.

In a surf through Ram truck sites I saw gear ratios being the often suggested option for increasing usable power and performance from the 4.7L engine. But that’s a pretty common situation for all brands of late model vehicles. Of course if over sized wheels/tires have been installed they are robbing usable power and should be replaced with the standard size.

Adding a turbo will just stress out the engine, cooling system, and transmission. They weren’t designed for this.

Of course if over sized wheels/tires have been installed they are robbing usable power and should be replaced with the standard size.

That’s a very good thing to remember while on a quest for power. When bigger wheels with wider tires are installed, the loss of power at the wheels is significant. It may not be acknowledged right away because of the emotional and financial investment in “improving” the vehicle with the bigger wheels and wider tires. Later comes the need for more power from the engine.

Back when alloy wheels and wide low profile tires were not so common, they were part of an upgrade package that often included a bigger, thirstier engine. That way the loss of power due to the wheels/tires was compensated for by the carmaker.

The joke among mechanics long ago was that installing huge WIDE OVAL tires on the rear of cars with shackles to keep them from rubbing the fender should improve fuel mileage because once installed the car was always coasting downhill. You’d be surprised how often people with the big tires on the rear thought that was true.

But the general consensus hasn’t changed in recent years.

I’d suggest the general consensus is no longer valid. Under about 12 psi boost, you can turbocharge nearly any engine without an intercooler and run on 91-93 octane fuel. An intercooler will increase horsepower and decrease the possibilities of detonation.

Given a good control of fuel, and boost, even high compression engines can be boosted. The kit below is designed as a bolt-on kit for a Honda S2000 with 11:1 compression ratio. The starting point for boost is 10-12 psi!

The new Miata, with its 13:1 compression ratio also has a kit for it; 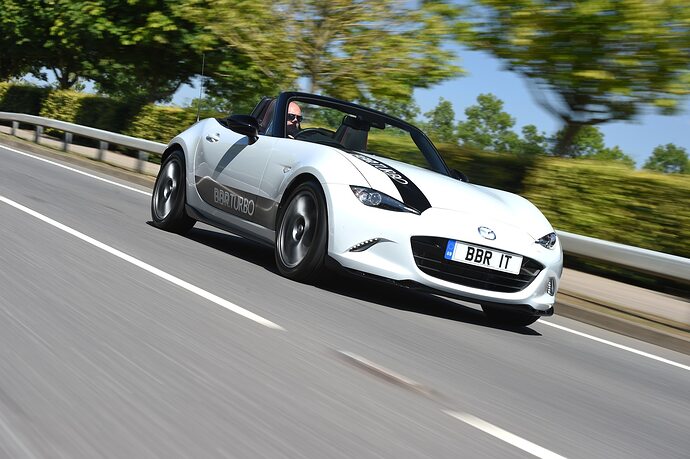 BBR has created a Stage 1 turbocharger package for the Miata MX-5 ND, promising to squeeze 248 hp and 236 lb-ft of torque from the car's 2.0-liter engine.

Advertises at least a 70 hp (46%) improvement. Although they don’t advertise boost levels, assuming 80% efficiency, they must be pushing 8 or 9 psi.

any suggestions for what turbo would be most effective

Trade it in for a truck that can better handle what you’re trying to tow. A custom turbo setup, done correctly, will set you back a good $3k-$4k (maybe a bit more) after all is said and done Add another $2k for forged rods/crank/pistons if you want this to be reliable for towing. . If you’re thinking of getting one of those cheap “universal” Chinese turbo kits, then you deserve whatever happens. You’ll also be grossly exceeding the 340 ft/lb torque limit of your truck’s NV3500 gearbox as well.

Basically you’ll be money ahead to sell what you have, and take the $3k-$6k+ you’re going to have to spend to make this work, and buy a newer Hemi-powered truck (or 6.0L LS powered GM or Ecoboost Ford) instead.

A vehicle that old I would simply drive it carefully and put your money for a decent turbo kit (couple thousand dollars) into buy the next truck or repair fund.

The turbo is not going to buy any more tow capacity.

My knowledge of engine physics is basic, @Mustangman. I understand that average piston speed is limited to about 60 mph and an effective compression ratio on a gasoline engine is limited to about 15 to 1. But certainly there are numerous details that can extend the compression but the OP asks about adding a turbo to a stock engine which eliminates the possibility of direct injection, exotic cam timing like Miller Cycle, etc so I see he’s limited to the 2 +/- psi of boost. But again I’m basing that on rule of thumb basics. Those who think out of the box can push the limits but doing so can be very expensive and frustrating.

The truck has about 3,000 miles on engine, and yes I added a dual high pressure pulling clutch and 4.10 gears to the axles

What size intake inducer, or exhaust exducer would I need if I was to add a turbo?

I also pull about 2 or 3 times a month, at about 13k to 16k lbs, trucks just slow, that’s why I thought about adding turbo to it