To change or not to change the battery?

I would like to know if anybody has had the following experience: a friend said that 2 of 4 wires were corrected to wires they should not have been. He changed them, connecting them “correctly.” I don’t remember how long it took, but after he did that, the battery died and could not be charged. I bought a new battery. Two days later, it was dead and would hold a charge for only around 2 hours, after which it could not start the engine. I have a new battery sitting here that I will not put in because it would be junk in 2 days. Anybody hear of anything like this?

@Snagglepuss I moved this to a new thread. You might want to supply a bit more info so others might try to help you.

I assume you mean “connected” not “corrected”?

Don’t let this friend work on your car again. Un-do what your friend did, and charge your old battery and it should be fine.

A dead car battery is not like a flashlight battery. Car batteries are meant to be recharged.

Your friend’s creative wiring may have damaged the alternator or simply disconnected it. What is the year, make, model, and engine of your car?

Took 2 batteries back (at different times) and the store agreed that they were bad. Same friend insisted on replacing alternator. I disagreed, but...didn't help
lion9car February 13, 2018, 3:25pm #5

Without knowing what these wires are, there’s very little we can do to help. Can you attach a picture, perhaps?

I can only echo what Mustangman said…never let this “friend” near any of your vehicles. Never.

This friend is not a neuro surgeon I hope. Put it back again.

In addition to the other valid replies, I have to wonder whether the OP’s “friend” (???) is merely incompetent, or if this was actually an attempt to sabotage the OP’s car.

Never ascribe to malice that which is adequately explained by incompetence…

Getting wires crossed in cars like that can often blow an alternator diode. That’s my guess. Check all the fuses of course first, including the fusible links. Another idea , install the new battery but do a phantom current measurement immediately.

1998 Dodge Stratus bought used at 190,000. Not destroying batteries until some time after those wires were messed with.

The wiring has to be repaired.

a few hours or even days, the battery can keep the car running even if the alternator is dead.

Thank you for trying to help. As I said, I have returned 2 batteries to the store and in both instances, the employee agreed they were bad. I have a battery here that has never been used because I know what will happen. Yes, when I bought the first battery, I turned in an old battery I had sitting around.
James

As I said, we need more information. Is this correct:
Your “friend” messed with the wiring. Soon after, the battery died. Then a second battery died. At some point he changed the alternator.

What is the timeline? how soon after he messed with the wiring did the battery die? When did the second die, how long after you installed it?

Yes, thank you. There might not have been anything wrong with them.

Next time you install a fully charged known good battery, ask your shop to measure the current that’s being drawn with the car parked and the key off. That should be less than 100 mA. More than that, there’s something wrong with the car’s wiring that is discharging the battery. If that first test is ok, now measure the battery voltage. It should be about 12.6 volts (key off, car parked). Make sure the polarity is correct, + to +, - to -. If that’s ok, now turn the key to “on” (engine not running) and measure the voltage and current draw again. Voltage should still be about 12.5-12.6 volts. Current draw should be less than 1000 mA. If that’s ok, remove the current meter from the circuit and start the engine. Voltage should be about 14-15 volts and gradually reduce to about 13.5-14 volts over 15 minutes or so. Does it?

Next time you install a fully charged known good battery, ask your shop to measure the current that’s being drawn with the car parked and the key off. That should be less than 100 mA

Parasitic draw should be less than 50 milliamps

Where are you getting YOUR numbers?

Parasitic draw should be less than 50 milliamps

Where are you getting YOUR numbers?

. Here’s one source below that suggests 85 mA is typical in many modern cars. 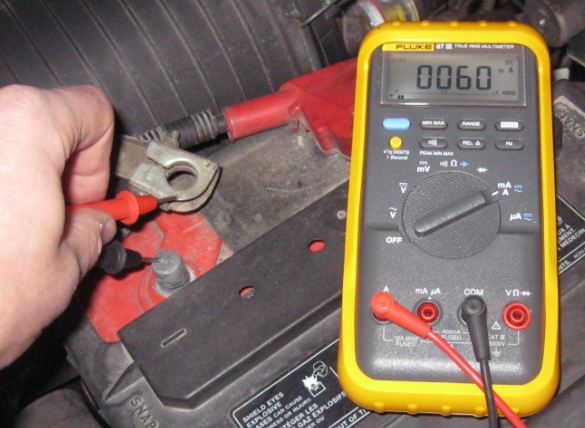 What is "normal" for a parasitic draw?

What is "normal" for a parasitic draw?

“I was having a conversation recently on an Internet message board, when the subject turned to parasitic draws or “key-off” loads. As I explained the math behind parasitic draws, it was suggested that an 85-milliamp draw is not all that uncommon on newer vehicles. That is absolutely true. Memory seats, mirrors, radio presets, satellite radio, GPS systems and lots of other fancy electrical gadgets have combined to greatly increase the electrical demands of many newer vehicles. However, just because an 85-milliamp draw may be normal, that doesn’t mean an 85-milliamp draw won’t adversely impact battery lifespan and performance, if the battery isn’t properly-maintained.”

Here’s one source below that suggests 85 mA is typical in many modern cars.

The OP’s car is 20 years old and probably very basic. The ignition off draw should be 25 to 30 milliamps.