While we were driving home from vacation, on I-95 just south of DC our tire suddenly blew out. Rubber flew off and we ended up in the emergency lane after skidding across several lanes and hitting the guard rail (thankfully ok except for needing to use the spare). The tires are maybe two years old at this point. Picture of the damaged tire for reference. I’ve never seen anything like this. How could this happen to the tire? Tires were checked prior to leaving for the trip. Also, thankful for this old car keeping my family safe. 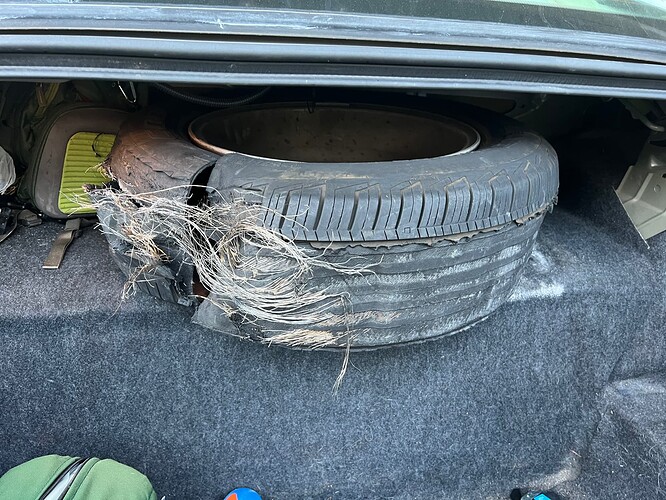 Looks like severe tread seperation. Often caused by heat as the result of low tire pressures. Even if you checked pressure before you left home, you may have run over a scew or nail which caused a slow leak you did not feel or detect. Slow leak, lower pressures, more heat and boom, there goes the tire.

Often caused by heat as the result of low tire pressures

+1
More than likely, that tire had very low inflation pressure, and the build-up of heat in the tire’s carcass as a result of that very low pressure caused the tire to self-destruct.

First, I am glad no one was hurt and that other than the incovenience, you were able to arrive home safe.

There doesn’t appear to be a second belt, but there is a series of rubber strips on what I think is the interface between the belts. I’ve never seen that before and am at a loss to explain it. If this were the top belt, I could point to cap ply, but that doesn’t work.

I note that to the right of the splt, the tread shoulder rib is present on the top half and absent from the bottom half - but to the left of the split it’s the opposite.

It would be interesting to see the other half of the tire.

Best guess: Mustangman said it: Tread separation, but not as clear as I would like it.

Cause? Certainly underinflation would do that, but it’s also possible that there was a cut that eventually developed into a separation.

And just an FYI: A separation can go from not detectable to catastrophic in a few hundred miles. Since this was on a vacation trip, the cut could have occurred hours before.

Most blowouts are caused by underinflation or road debris.

You refer to “this old car” and “tires were checked” prior to leaving. You might define what both of those phrases mean.

This looks like a manufacturing defect to me. First I would check the date code on this tire and on all the other tires of the same make on the vehicle and see if they match. If the others have the same date code and manufacturer, there is a chance that they too will have the same defect.

I had something similar to this happen to me only I wasn’t going as fast at the time so the damage was not as great. It was a Michelin tire that was less than two years old. It was replaced under warranty but a month later a second tire blew the exact same way. The second time, Michelin replaced all the tires as I bought them all at the same time.

I did not have the tread separation like you had, but the tires split radially just like yours did.

Edit: I did not hit any potholes before the tires blew. I think it was a bad batch and by the second one, Michelin knew that but would not admit it to me.

I concur w/Keith above, unless driven extremely underflated, my guess is some kind of pre-existing problem w/the tire. Only a tire expert examining the actual tire can tell you for certain. I had a tire come apart like that one time, fortunately rear tire at low speed, just had to pull to the side of the road and change it is all. Probable cause: tire was 15 years old. I don’t see the common signs of a really old tire in your photo. Must be something else in yoru case. Count blessings the only damage was to the tire, fender, and guard rail.

Hi and thank you! My husband checked the air in the tires before we left. The car is a 2007 mercury grand marquis.

My husband checked the air in the tires before we left.

Does your car have a Tire Pressure Monitoring System (TPMS)?
(2007 model year=probably not, because it only became mandatory as of the 2008 model year)

If the problem is confirmed to be the result of underinflation, that is a perfect example of why a TPMS can help a driver to avoid some dangerous situations. Even if the inflation pressure was checked a few minutes before entering the expressway, a puncture can result in dangerously low inflation pressure w/in a couple of minutes. No, you can’t have a TPMS system installed on this car at a reasonable cost, but at least you can take comfort in knowing that your next car will almost surely have that safety feature.

Now I cannot vouch for the quality of the system, but you can’t complain about the price or ease of installation! Cheap enough to give it a try. 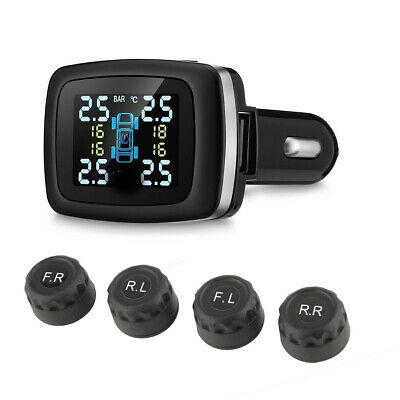 There are more expensive systems on the market. They were developed for travel trailers since tires are such a big issue with them.

it would be interesting to know the brand and model of the tire and whether it is subject of a recall. It should be reported.

In examining what’s left of it, can you detect a puncture that might explain subsequent deflation?

Did you notice if the tire felt or smelled really hot immediately afterwards (an indication of low inflation)?

How thorough was the pre-trip inspection? Was the tire grasped across the tread at intervals and pushed side to side to detect the beginning of separation? Did you notice any tendency for the tire to vibrate, perhaps at a certain speed? This could indicate developing tread separation.

In the '60’s my dad mounted a set of new but inexpensive Sears tires (not retreads) prior to trip of several hundred miles. Returning home one tire blew and upon inspection it was noticed that the tread on another tire, which appeared intact, was loose and could be wiggled right to left. Those tires had required several rebalancings, a missed indication of a structural problem.

Another time we hit a pothole at night while doing ~ 70 on an interstate, the tire appeared okay upon immediate inspection but a few days later had developed bulge and radial crack straight across the tread - it was properly inflated. Those were in innertube days, the tire was a Michelin, and I gave the steel belt a lot of credit for holding it all together.