Yesterday i made the oil & filters change to my car, a Focus Mk3 1.5 Tdci
I checked the timing belt to see the condition, it has 64.000km since i changed the whole timing belt & water pump etc.
The problem is that it seems weak and it flutters when i rev the engine.
The service that changed it told me is normal and works fine, but i don’t know.

Video when i rev the engine: fmm ford
Video when stopped and seems tight: fmm ford 2

What do you guys think? Needs replacement or not?

Yesterday i made the oil & filters change to my car, a Focus Mk3 1.5 Tdci
I checked the timing belt to see the condition, it has 64.000km since i changed the whole timing belt & water pump etc.

Every timing belt I’ve ever replaced had a procedure to adjust the tension. Not sure what is for that vehicle. Might want to look it up and do that procedure. Timing belts don’t usually stretch. They break. And I’ve seen belts that look perfectly normal break within weeks.

Tried this now to other engines of my friends and the belt is doing the same thing. Also i checked a WV and in certain position the belt seems weak also and is flexing when i rev the engine.
I don’t know what to do…

Some timing belt fluttering is probably normal. When I replaced TB on my Corolla I idled engine with timing covers off to check valve timing. Belt fluttered or oscillated a little. Didn’t do that under hard accel though. I’d expect more movement then b/c the rotational inertia forces come into play. If your belt remains in good condition, about the only thing you can do is verify the belt tension is correct. If tension questionable, adjust/replace tensioner. The normal advice here where replacing a timing belt is to also replace the tensioner, and idler pulley(s), as applicable to your car’s configuration. Were those parts replaced along w/the belt 65 KM ago?

I changed it today because it looks bad, the service made a terrible job and they did not tighten the tensioner, it was weak and also they added silicone on the water pump and it was leaking. (in 64k km went from max to min)
The problem is that the new tensioner (Dayco) was also bad and when i put the keyw to tighten it, it broke, so i used the old tensioner that is from Litens.
Is there any problem i used the old tensioner? Since it has only 64.000 km?

Is there any problem i used the old tensioner? Since it has only 64.000 km?

My Corolla is using the original timing belt tensioner at 200 K miles. So it’s certainly possible you 64 km tensioner will remain ok for many more km’s. But common sense says if you’ve got things taken apart enough to replace the tensioner, install a new one, not the old one. Use a good one, oem quality, not a cheapo part. Buy one from Ford if necessary. Good idea to also figure out why the water pump is or was leaking. If I had that problem myself I’d remove the water pump and inspect the sealing areas. I replaced the water pump on my Corolla in the past year. It’s configured as two parts, and only one of them gets replaced, the other is re-used, has no moving parts. The biggest and most time consuming part of the job was cleaning the gasket area on the old part so it would seal leak-free when attached to the replacement part. Very easy to see a shop take a shortcut on that part of the job.

It was leaking because at the service they added silicone over the gasket.
The tensioner is Litens, it comes on OEM kit.

If you can see the belt witout taking stuff apart, thats not the timing belt, it’s the serpentine belt, which is a whole different ballgame.

I know the difference. I’m talking about the timing belt.

Then please explain how you saw the timing belt “flexing when you revved the engine” if you didn’t take off the belt cover first.

That is definitely the timing belt. 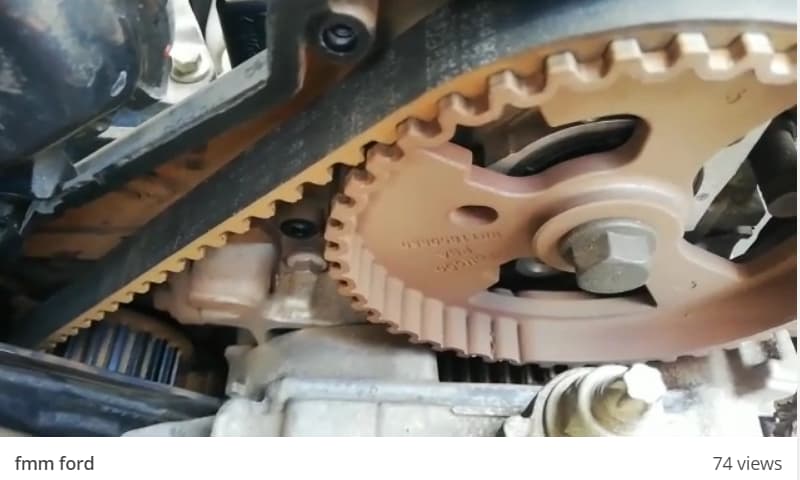 i added a video, you didn’t see it?

Well if you didn’t even read the full post why are you asking me how i saw the belt without taking off the cover? Obviously i did take off the cover, as you may see in the videos that i added.

I expect the explanation is that your vdo’s weren’t in the usual u-tube format we commonly see here. I didn’t see them either.

It was leaking because at the service they added silicone over the gasket.

I used a very thin layer of spray-on gasket sealant on the water-pump clamshell’s gasket. Both on the gasket itself, and on the sealing surface. I think it was a permatex product, red colored. Might have been CRC or Loctite though, don’t recall for certain. I wouldn’t use a thick layer of siicone rtv for that application myself.

If you can see the belt witout taking stuff apart, thats not the timing belt, it’s the serpentine belt, which is a whole different ballgame.