Most folks think hybrid cars are a modern invention. Many think the Prius started it all forgetting about the Honda Insight that came before the Prius.

Recent articles have appeared about Porsche building a hybrid equipped with wheel motors in 1900. The car, a Lohner-Porsche was a serial hybrid. I.e. an IC engine drove a generator that drove and electric motor. A further development allowed the generator to act as an electric starter many years before Kettering’s design.

But was Porsche really the first? Maybe not. Maybe that was the Arnold, an American car built only in 1896 and offered for sale at Amelia Island in 2016. The car describes hat we would call a parallel hybrid since the motor is a starter/generator/booster motor in parallel with the IC engine.

Or maybe the first hybrid came from an English company, Arnold also in 1896. Also a parallel hybrid. 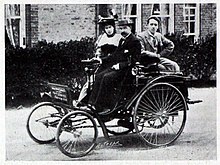 Arnold (automobile) Arnold-Benz, driven by Alfred Cornell, 1897. The Arnold was based on the Benz Velo (pictured) The Arnold was one of the first motor cars manufactured in the United Kingdom. It was produced in East Peckham, Kent between 1896...

Late 1800s into the 1920’s, car makers were working to find the optimum solution for personal transportation power. Electric, steam, IC and also hybrids, as we see here were all considered and built for sale. As we all know, the IC powertrain won the early battles as steam and electric faded in the marketplace.

Did they run carfax on that car before making the offer? Think of all the recalls and TSBs that were likely overlooked.

And to think that years ago I thought I was a genius for dreaming up the idea of incorporating an electric motor/generator into the flywheel of a car engine.

As we all know, the IC powertrain won the early battles as steam and electric faded in the marketplace.

Gasoline truly is an excellent source of energy for mobile machines. Perhaps we’re experiencing advances in energy storage sufficient to finally make electricity a better energy source. Jay Leno once said that before the Model T, there were more electric cars in NYC than gasoline cars.

Henry Ford originally wanted the Model T to operate on ethanol. I never read what his motivation was, but it may have been to enable the enormous expanse of agricultural/rural areas across the country to be able to make their own fuel, creating a much bigger market.

The volumetric energy density of the Tesla battery is about 20 times that of a 1910 lead-acid design while the electric system likely was about 75% efficient. Range could be as much as 100 miles but 30 miles is more common. Speeds were low at 8-15 mph or so. Range anxiety was a problem in 1910 since much of rural America wasn’t electrified!

I worked this up for a STEM student tour of the car museum I volunteer for.

Jay Leno once said that before the Model T, there were more electric cars in NYC than gasoline cars

Makes sense, easy to use, not far to travel, recharge at home. Plus NYC was relatively well electrified.

I’ve heard that, too, with no reasons given. Maybe farmers and their own stills? Good corn for drinking, the nasty stuff for fuel?

Ford owned 10,000 km2 of land in South America. Maybe he wanted to use that land to grow corn or another crop to produce ethanol. His rubber plantation was a bust, why not try something else?

Range anxiety was a problem in 1910

Except that in 1910 automobiles were strictly playthings of the wealthy… and there were no highways to go far from home.

I’ve heard that, too, with no reasons given.

I’ve heard and read it many times, never with an explanation. My explanation is pure speculation… but it makes sense… to me, anyway.

Re; the fuel quality, I doubt of that made much of a difference in early engines. I imagine just about any liquid that burned would run them. “White lightning” included.

The big difference with the Prius is the addition of the battery. That’s the key to the improved mpgs. Diesel electric locomotives are also hybrids, but any extra power generated during braking gets radiated away, not stored for later use (except for the few that now have storage batteries).

All 3 examples, the Porsche, Arnold and Armstrong had batteries on board. All reportedly had electric starters which would have required batteries and the recharging of such. Smaller than the electrics of the day but present. It seems likely the electric motors were there to boost the power or, in the case of the Porsche, to eliminate the transmission.

I doubt that re-gen braking was very well developed if at all considering the mechanical relays that would have been used to control that. Considering the motors were DC, speed control more than likely consisted of relays and resistors to allow some level of “staged” speed control much like older forklifts.

So definitely not a Prius!

doubt of that made much of a difference in early engines

With compression ratios of 4:1, no, octane wasn’t a problem. Availability of fuel was, as drugstores were a primary source of fuel. Vintage cars are often run on “white gas” or Coleman camp stove fuel. Essentially low octane gasoline without all the additives. Ethanol’s octane wasn’t really needed. I think availability fuel in rural areas may have been a contributing thought to Ford.

and there were no highways to go far from home

Far is relative isn’t it? When many people of the day never traveled more than 20 miles from home, 20 miles could be considered “far.” Also, early cars were made to travel on the same un-paved roads that horse and buggies used so travel from, say Alexandria, VA to Washington, DC, was a trip of a few hours by car and a day by horse.

It’s 8 miles from the south end of Alexandria to the Lincoln Memorial, just the other side of the Highway Bridge between Arlington and D.C. That would have taken maybe two hours on a slow horse. The time by car may have been about the same. It’s hard to say since the roads of that era were probably pretty good. The area was pretty metropolitan at the time.