The result of attempting a right turn from the left lane

… while talking on a cell phone, is damage to a celebrity’s brand new $2 million Bugatti. Something tells me that the woman driving the CR-V is going to have her insurance rates jacked-up… a lot… 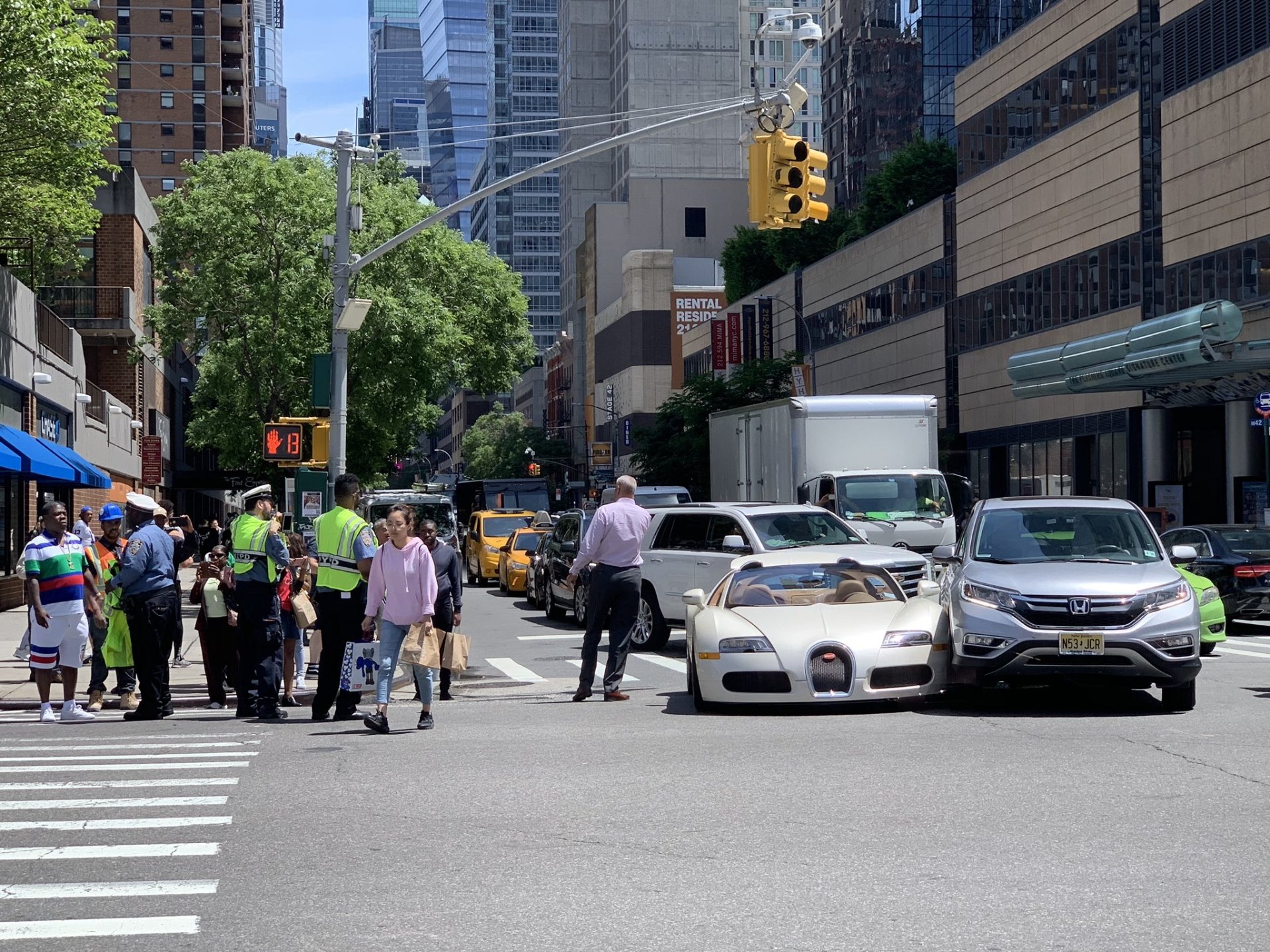 Can you imagine being the Honda CR-V making the insurance phone call for crashing into a $2 million supercar?

Never heard of the celebrity.

Where I live, Its illegal to hold a cell phone in your hands while driving. .You get a $1000 fine if you are caught and driver license suspension for a year plus 5 demerit points.I am in Canada

per article, CR-V owner was not charged

I drove to an open house at an exotic car dealer near me. On the way there I saw a bright yellow car involved in an accident on the highway. A really fancy sports car I could not identify. After wandering around the exotic car dealer for a bit, that same car, a $250,000 Ferrari, came in on a flatbed. They owner had picked up the car from that dealer an hour before. Totaled it before he got it home.

Where I live, Its illegal to hold a cell phone in your hands while driving.

It is also illegal in NJ–where the female driver lives–and in NY, where she hit the Bugatti.
Even though she wasn’t “ticketed” at the accident scene, that doesn’t mean that she won’t be given a summons or two via the US Mail.

There’s a quarter of a million dollar fender bender…

If I had a $2+ mil Veyron, I wouldn’t drive it around Manhattan. Traffic and driving in general there is ridiculous, you’re just asking for trouble.

If I had a $2+ mil Veyron, I wouldn’t drive it around Manhattan.

Well, since the dealership is in Manhattan, he really had few options other than driving from the Manhattan dealership to his estate in NJ. I suppose that, in retrospect, he might now think that he should have had it flat bedded to his home, but who would expect somebody to make a right turn from the left lane without first making sure that nobody was in her blind spot?

He was involved in another accident about 5 years ago when a WalMart tractor trailer ran into the Limo he was in. At least one person was killed and tracy was seriously injured. The driver "had been awake more than 28 hours at the time of the crash," a report said.

Yeah, was gonna say, this is a lot better than the last wreck he was in. That one had him out of commission with brain damage for a long time.

If you can afford a seven figure hypercar, you can probably afford a grand to have it delivered to your house. I’m kind shocked he didn’t spring for that or if it wasn’t included with price of the car.

I’m just glad to see that Tracy Morgan’s severe brain injury has been rehabilitated to the point that he can now drive. (There is zero sarcasm here). I enjoy his work. His future was seriously in doubt.

This and all other comments like it lack any sort of empathy. Do you know what it’s like to get a brand new car? He must have been so excited to go pick it up and drive it off the lot. You can’t get that by having a car trucked in on a flatbed trailer. It’s 100% normal human emotion; please stop trying to put any sort of blame/shaming on anyone other than the idiot on the cell phone.

Have you seen Tracy Morgan’s car collection? He guest starred on Jerry Seinfeld’s Netflix show Comedians in Cars Getting Coffee if you want to see part of his collection.

Although I am sure this inconvenience added stress to Tracy Morgan’s day, I think he will be fine; he has the perspective to not sweat the small stuff.

I went through something similar yeas ago with a Subaru I had. I was going home one night about 9 P.M. It was foggy with snow on the ground and happened on a 4 lane with center islands.

I saw a vehicle on the shoulder with emergency lights flashing so I moved into the inside lane to create a little space.
Suddenly she made a left turn from the should across both lanes and was apparently going to go through an opening in the median to head in the opposite direction. I had time to grab the steering wheel tightly and never even hit brakes. Broadsided her right in the left rear wheel area.

She told the cops of course that she did not do this and that I changed lanes on her. The damage said otherwise. No damage on the side of my car; just dead center front. She had missed a turn in the dark and fog while on her way to her parents home.

I agree about a Veyron or Chiron in traffic. No way I’d drive a car like that in heavy metro traffic.

Do you know what it’s like to get a brand new car?

He must have been so excited to go pick it up and drive it off the lot.

It’s one of the most expensive cars you can buy, I’m sure he was excited, it’s a very exclusive exciting car. Manhattan also has some of the worst traffic in the world. To me it’s not worth the risk given the value of the car.

You can’t get that by having a car trucked in on a flatbed trailer.

I guess not, but the risk of damaging your seven figure car is substantially less. Most people who have Veyrons don’t drive them much, rarely in mid-day NYC traffic.

So is the ability to weigh risk and reward.

please stop trying to put any sort of blame/shaming on anyone other than the idiot on the cell phone.

I’ll assess blame however I see fit, thanks.

I’m pretty sure he lives in NYC…so it’s kinda hard for him to avoid driving there.

Not that this matters a lot, but it was a 2012 Veyron, several prior owners.

I’m pretty sure he lives in NYC

He lives in New Jersey.