A Toyota dealership in Arizona has put a new Camry on display that was rear-ended by an 18-wheeler, and was then pushed into the back of another large truck. Even though the rear of the car was completely crushed, the passenger compartment remained intact, without even suffering any broken glass! The driver reportedly walked away with only a few scratches. 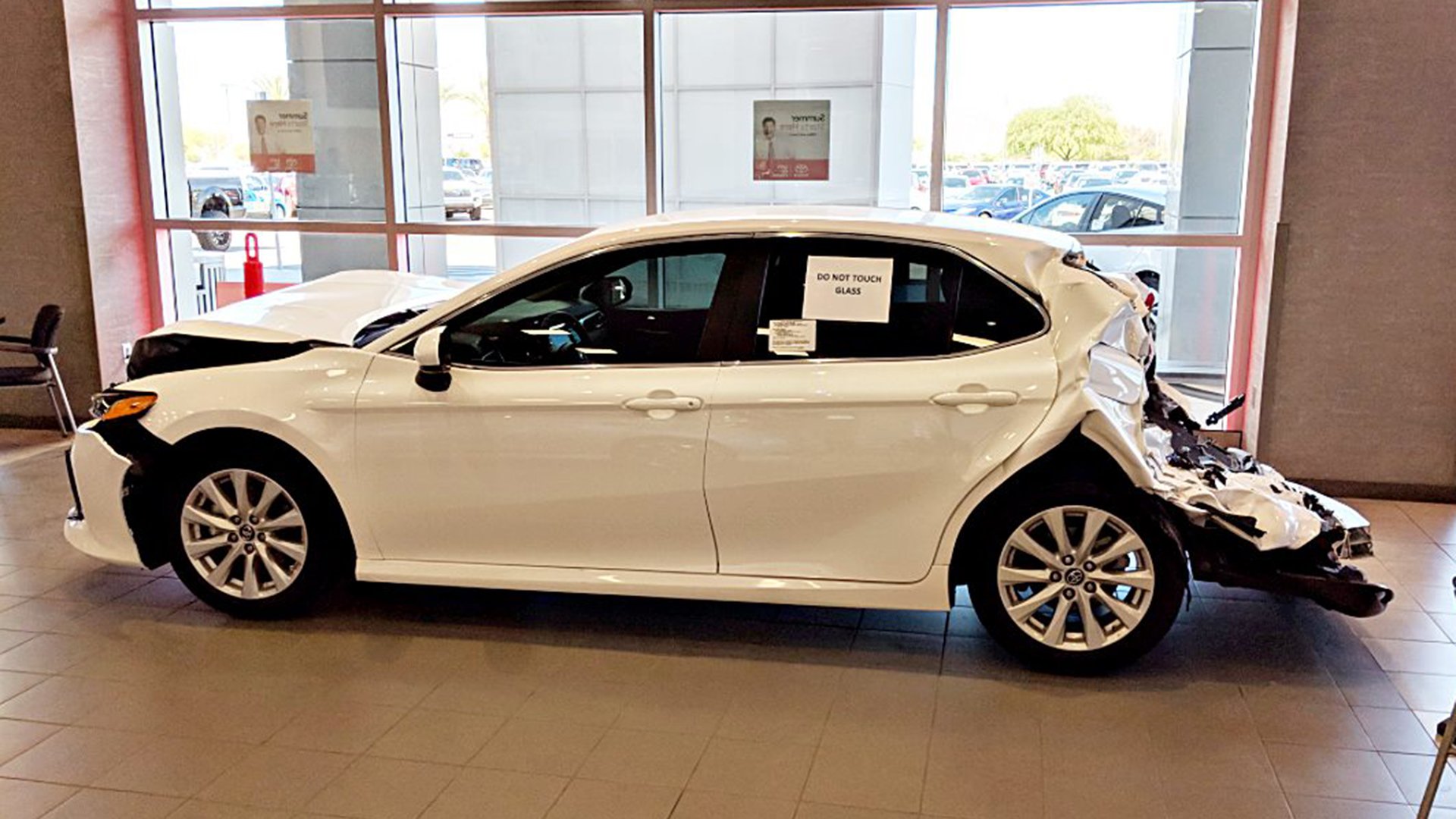 Interesting glass did not break, but the Camry demonstrated how modern cars with crumple zones are supposed to work. With the exception of the glass I would guess many brands would have similar results.
Now if the car had been a '58 Roadmaster it would have been the semi that suffered the damage…lol

Well, the semi and the Roadmaster’s driver.

I saw that story too and it was very interesting to me.

the semi and the Roadmaster’s driver.

Yup!
The lack of crumple zones and passenger restraints, plus the abundance of hard/sharp/unpadded surfaces in that land yacht would result in either death or extremely severe injuries for the driver of that old Roadmaster.

My brother just reminded me that, in 1960, my uncle’s '58 Desoto was rear-ended by a Caddy and he wound-up hitting the rear of a Lincoln. Of course, his Desoto was totaled, and his head and body were almost totaled.

The only good thing to come from that accident was his purchase of a brand-new white 1960 New Yorker convertible, with red leather interior. Now that was a beautiful car!

The old cars weren’t that bad when it comes to rear end collisions. Just off the top of my head I can relate two of them. These both happened back in the early 70s.

A drunk traveling 60 MPH plowed into a stopped police car from behind and shoved the rear bumper clean up to the rear seat. Passenger cabin intact. Both cops went to the hospital with minor neck injuries and the drunk went to jail.

At Bouse Junction (in the Glass Mountains of OK) I came upon an accident at the stop sign which is a few miles south of the Little Sahara sand dunes.
A cash register rep had plowed into the back of a stopped Buick with a Chevy station wagon while also running about 60 MPH. The bumper of the Buick was pushed up to the back seat and the Chevy was in surprisingly good shape considering the impact. Neither driver was injured and turned down my offer to haul them in and get checked out at the hospital which was about 40 miles away.

When i wiped my '59 Corvette out against the side of a Chevy pickup I was running about 50 when I hit them.
Lap belts only; neither in use which was common at the time. The car was annihilated from bow to stern and neither me nor my passenger suffered even the tiniest scratch or bruise. Cabin intact. Rest of car shredded as it essentially exploded on impact.

pic shows the bumper was not even touched. so the somewhat soft body structure absorbed the impact. i wonder if the unibody would have been more bent if the impact had been lower? maybe than the door openings would have been tweaked

Looks to me like the door frames are twisted. There’s clear pinching around both door openings.

I remember when I was in high school, back in the old days when color hadn’t been invented yet, the State Police brought around a wrecked car on a trailer, smashed glass and blood stains and all, and used it scare kids into driving carefully. New cars are certainly safer than those 1960 cars were.

Picture what happens to an egg in a safe as it lands after falling off a 5 story building. The safe survives. The egg becomes scrambled. That would be the driver inside that '58 Roadmaster…

So true, most likely the rear end hit would result in major neck trauma,
then the front end collision would have thrown the driver into the steering wheel.

then the front end collision would have thrown the driver into the steering wheel.

… which would very likely have penetrated his sternum.