Test drive of a '55 Packard

I think that I may have posted this video a couple of years ago, but, in any event…
Now THIS is a car!

Thanks for a terrific video. My favorite car from that era is the Cadillac Eldorado Brougham.

Ah that brought back memories. Two sisters taught at my grade school, first and third grade. They bought a new Packard just like that and commuted home about 100 miles every weekend. Unfortunately they had a head on one weekend and one of them was killed. The survivor never came back to school but I saw in an obit she had a long teaching career in another town and finally died. I was always impressed with that car.

Maybe one of the “Topics” should be old cars or restorations or something instead of the show or driver distractions. By the way what ever happened to the guy with the 55 Caddy that they wouldn’t let him work in the parking lot anymore?

There is only one way to describe how old cars drive. Frightening…

Loved my 1968 cougar xr7, felt like I was driving off of both sides of the road in my bosses 61 caddy!

Loved the video! Anybody know what that thing on the engine being turned by the fanbelt that looks like a miniature V8 is?

I thought that was the air conditioning compressor.

That would make sense. The finned covers would help dissipate the heat from the compression of the refrigerant.

There is only one way to describe how old cars drive. Frightening......

I agree, the last time I got to drive a 1950’s era car, it amazed me what a land-barge it was. The pickup trucks of that era actually handled better, although they shared the inadequate brakes of automobiles.

The design priority in the 1950’s was to pamper the passengers with a super smooth ride so they came with super soft springs and shocks, which meant they swayed all over the place when you took a turn at any speed above a slow crawl.

They don’t make them like this anymore, thank God!

The “luxury” cars of the 50s/60s with the extra vague power steering and seemingly non-existent suspension were similar to constantly tacking a sail boat back and forth trying to achieve a straight line. The pickups of course had a much stiffer suspension for carrying loads and did handle much better. I read an article this morning on state of the art computerized “nanny” features already in production. Scary stuff. If people don’t want to learn how to actually drive I have a suggestion. “Public transportation”!

@thesamemountainbike, yes that is a V-twin air compressor. That type of compressor was also commonly used on many Chrysler products although I don’t remember any Chrysler versions having finned heads nor do I remember when Chrysler phased them out.

Somewhere in my huge pile of valued stuff (the wife calls it junk) I’ve got a box with one of those V-twin Chrysler compressors in it.

I’ve owned several '57 Chevy Bel-Air’s and always had to tweak the suspensions to get a comfortable ride. I love the cars but have to admit…their handling always left something to be desired. Every ball joint that I checked on any of these cars…was worn slap out…uppers and lowers. This was in the mid-60’s so age was not the culprit.

My dad owned a '55 Mercury station wagon that I only drove once. My cousin swears that I kept yelling “Whoa boy” every time that I came to a complete stop. It was a scary drive for me. I’ve added a picture but this one was not my father’s…just similar. 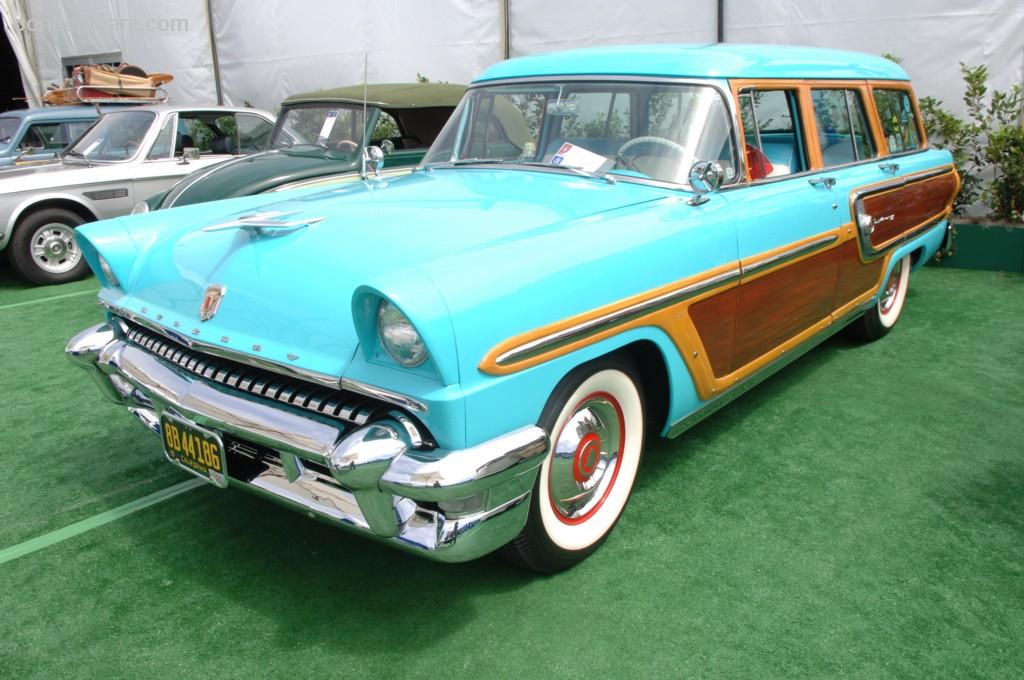 Thanks guys for teaching me what that is. It’s a cute lookin’ little bugger. Never saw one before.

My '53 Chevrolet, I did not refer to the brakes as brakes, but as impeders. They merely impeded your travels.

We had a 1964 Series 62 Cadillac hardtop, and the brakes worked well as I recall. Handling didn’t really get squirrelly on the highway under 70. Above that, it felt like the front end was lifting. Why soution wS to slow down.

I had a 1978 LeBaron briefly. It had an A/C compressor that looked like that. It had damn good A/C too, but rusted like steel wool