The US DoT hired scientists to investigate the the issues with Takata airbags. About 24 million airbags were produced without drying agents that would have preferentially absorbed moisture and made the actuators less likely to fail due to moisture contamination. The scientists also concluded that the current design did not adequately exclude moisture from the ammonium nitrate charge. It seems to me that adding a compatible desiccant to the ammonium nitrate charge and modifying the container it resides in should fix the problem in the future. Anyone feel better now, or are you too jaded from all the recalls we have had in the last 5 or so years to car anymore?

Where Does The Shrapnel Come Into This?
CSA

The propellant explodes violently, instead of at a controlled rate, causing the metal to fail and become shrapnel, I believe.

Ammonium nitrate, or fertilizer, can be pretty nasty stuff. It did this… 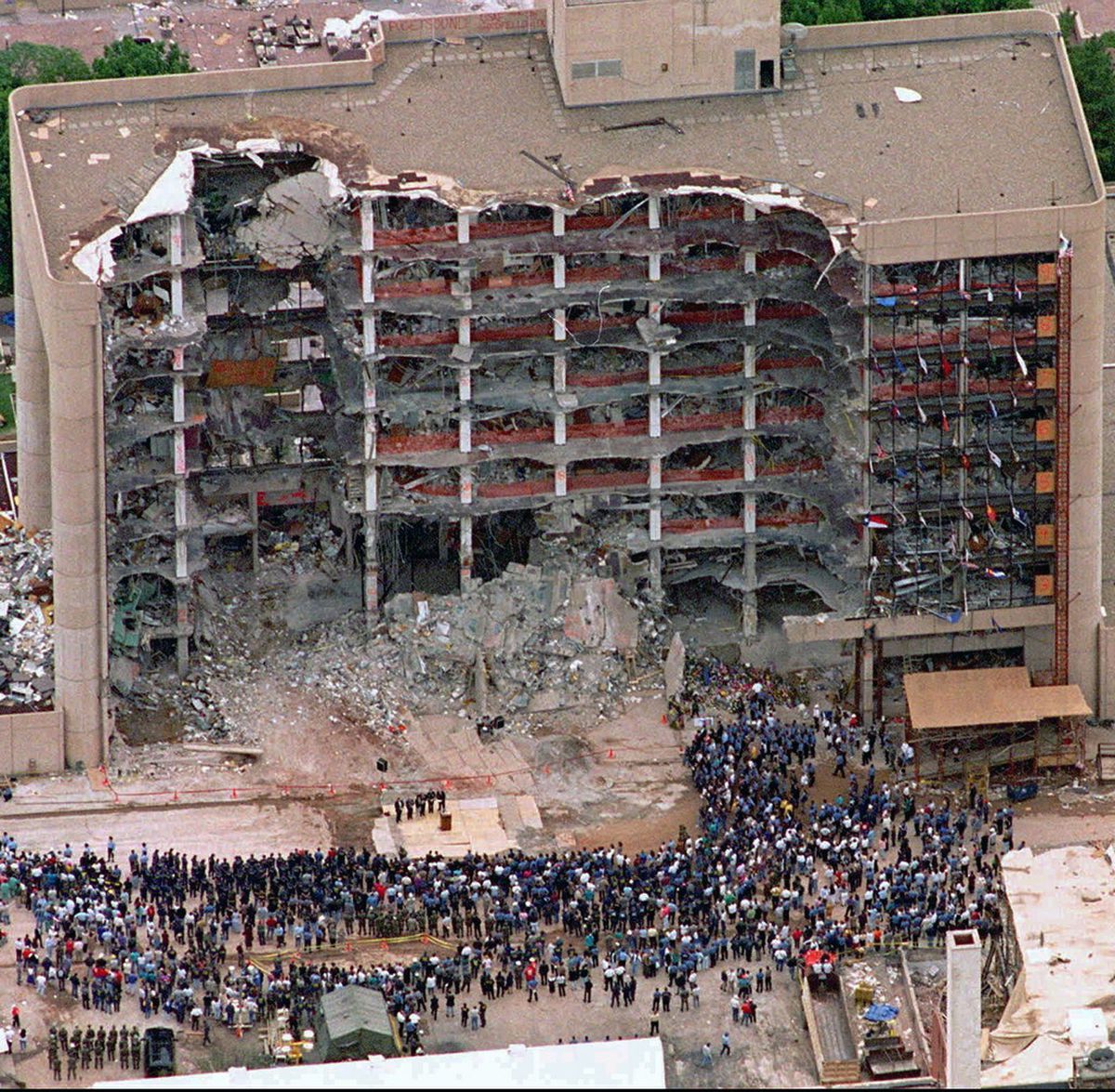 On April 19, 1995, Timothy McVeigh and Terry Nichols carried out one of the deadliest bombings outside the Alfred P. Murrah Federal Building in Oklahoma City, Oklahoma. The deadly blast left 168 people dead and injured more than 680 people, including...

Part of this problem seem like it comes from the "if 2 air bags is good, 4 is better, and 6 is even more better … etc etc … " philosophy. With more complexity comes less reliability.

The airbag inflator cylinders are 1/4" thick steel with small vent holes, when these cylinders fracture they make a mess.

I have not, of course, seen the report, but I’m a little skeptical by nature, and I have career experience that makes me wonder if the investigation’s findings are the whole story.

I started my career as an electronics guy, but I did work on some things that used “energetic” materials – mostly explosives, but also propellants (less boom and more gas, like in gunpowder and air bag inflators). I was on a few teams that investigated incidents of things exploding when they were not supposed to. These were unique (or nearly so) incidents from items with relatively small production runs – probably fewer produced than the quantity of scrap from making air bag inflators – and we did not have the failed hardware to examine. We never found definitive causes, only plausible explanations. Can the air bag investigations have had enough incidents and failed hardware to really find the root cause, and is it the only cause?

Another big question here is why did the standards and the analysis and testing of the energetic material and of the inflator’s design not find this simple apparent design flaw? Hindsight is (nearly) perfect, but in my experience we would have looked for things like this before allowing the design into production and use.

Regarding the suggestion to add a compatible desiccant to the energetic material, it is not so simple. I know of no specific desiccants used in the energetic materials I encountered (admitting that lack of memory is not any proof). However, adding >> anything << to the composition of an energetic material would (or should) necessitate a whole new regimen of qualification of the material and the design. And that brings you back to the questions you had at the start: why did the qualification process not find the problem the first time, and will the process find a similarly low-rate defect if the “fix” does not actually cure the original problem or introduces a new problem?

In general, nobody can afford to do enough testing to discover really rare occurrences. (The items I worked on wanted to be in the one-in-a-million range, but even that criterion was pulled out of somebody’s hat; and testing under the conditions of the plausible causes would have been astronomical.) Even realizing that truth, it’s one thing when the rare occurrence freezes your computer and you have to reboot; but it’s another thing when the rare occurrence kills somebody, especially when the somebody might be you. We go through life facing risks we don’t understand.

(Dad was an expert in the chemistry of energetics, especially propellants. I used to call him with professional questions. His career included some work on ammonium nitrate and the hazard of fertilizer being used as an explosive. One of the lawyers in the Oklahoma City case considered using him as an expert witness. I myself was in grad school at the U of Wisconsin in August 1970 when the Army Math Research Center was blown up by a van packed with ammonium nitrate fertilizer and fuel oil. Dad happened to visit soon after that. When he saw the physical layout of the buildings he said they bombers could not have picked a better position if they had known what they were doing.

(My former employer, “world class” experts in development and manufacture of energetic materials and devices, had their own spectacular incident while trying to formulate a new air bag propellant. I was not involved in that project or the investigations and I retired soon after, so I never happened to hear about any causes. The employer understood the known risks of working with energetics, and tried to make safety foremost in practices and in facility design. E.g., one production building was designed so that if an explosion occurred the roof would blow off, allowing the standing walls to direct the blast upward.)

Of course, the latest news is that Takata fudged the data to cover up the true extent of the issue. It now seems the replacement bags suffer from the same issue as the originals…nice.

@art1966, the scientists are from Orbital ATK and have been working with explosives and propellants for decades. It seems to me that if anyone has determined how to use drying agents in conjunction with explosives, they are the ones.

jtsanders – Thanks for replying.

Yes, Orbital ATK is probably as competent as anybody. My former employer has been developing making propellants and explosives since before WW-II. I have heard horror stories from other expert companies. I myself was involved in a project where the expert manufacturer wanted to mix a bit of carbon black into the energetic material, claiming it would not need re-qualification. Wrong! (They had some other blunders in the safety analysis of their proposed device.)

So maybe my knowledge is deficient and there are compatible desiccants. Why were they not included in the first place? Did the designers mess up – fail to realize that humidity would be a problem? That seems pretty basic.

The stuff is packed with energy, and the physics and chemistry are too complicated to model. You do the best analysis and prediction you can, then you do the “accepted” regimen of qualification testing.

But sometimes the regimen misses some unexpected conditions, and statistically you can’t expect to find the really rare things. For something as hazardous as an air bag inflator what probability of no-false-fire would we want – “five nines”; “six nines”? What confidence level would we want to demonstrate with testing – 90%; 95%; 99%. I don’t have the old tables (and Google is not giving me anything useful quickly enough), but the test quantities would be enormous. (As I recall, with our required standard 32 tests with zero failures – or maybe it was one – gives you only 0.9 probability at 80% confidence level.)

I’m not saying we can’t trust ATK Orbital (I’d like to see the report). I’m just saying that even if they did a great job we still don’t know how safe we are. That’s life.

Why are we not so concerned about the maniacal and incompetent drivers who inflict much more damage than faulty air bags?

Should we not work to prevent injuries from one obvious source because there are other risks that exist? Personally, I would be more worried about the 5 bombs surrounding me at all times when I’m driving than the potential of a random encounter with one maniac behind the wheel. But that’s just me…

Of course we should do what we can – or, rather, what we are willing to pay – to fix the air bag problem. But the maniacs are killing way more people. Does it cost too much to fix that? Maybe so, at least politically.

You worry about being surrounded by five bombs. Me too, but I feel like there are more than five maniacs around me when I drive. Maybe I need to move. :>)

Personally, I would be more worried about the 5 bombs surrounding me at all times when I'm driving than the potential of a random encounter with one maniac behind the wheel.

The statistics show that is not rational.

Edit: Not picking on you…I prefer driving to flying…also not rational.

I recall watching a video that explained and illustrated in tests the source of the shrapnel problem. But I cannot remember the details. I’m sure there are a whole lot of videos out there on the subject.

@art1966 wrote: “adding >> anything << to the composition of an energetic material would (or should) necessitate a whole new regimen of qualification of the material and the design.”

Perhaps the idea is to put the desiccant in a separate area of the canister, not blending it with the propellant.

Of course we should do what we can -- or, rather, what we are willing to pay -- to fix the air bag problem. But the maniacs are killing way more people. Does it cost too much to fix that? Maybe so, at least politically.

You worry about being surrounded by five bombs. Me too, but I feel like there are more than five maniacs around me when I drive. Maybe I need to move. :>)

Maniacs are a known issue but much harder to solve. Nobody I know has been killed by one but I know at least three people who have been killed by drunks.

The funny thing about statistics is it takes time to generate a relevant quantity of events to begin using those statistics in a meaningful way. I think it’s still early and we’ll find that the propensity for collateral damage from a fundamentally defective air bag design will continue to climb as more of the fielded units are put to the test.

Maniacs I can at least see some of them and try to avoid. I HAVE to sit in close proximity to numerous air bags that are likely to have a deficiency that causes them to grenade in my face if they go off. The chance of being killed by a maniac goes up if the protection device has also joined the other side…

Anyone who believes that truck full of nitrogen fertilizer took down those specially reinforced uprights and destroyed that whole building in OKC has no knowledge of the laws of physics. There were two explosions a few seconds apart. I have the recordings made by the lawyers a short distance away, in backup storage in more than one nation.

Also, in my mountain village the quarries use nitrogen fertilizer soaked with diesel for quarry work.