I noticed the area of the rack was leaking but couldn’t tell where it was leaking from. I checked the tie rod boots and only the driver side boot was wet on the bottom. It is not dripping through the whole tie rod. It looks as if the leak as been there for a while… I don’t see any loss of power steering fluid though. I am confused. 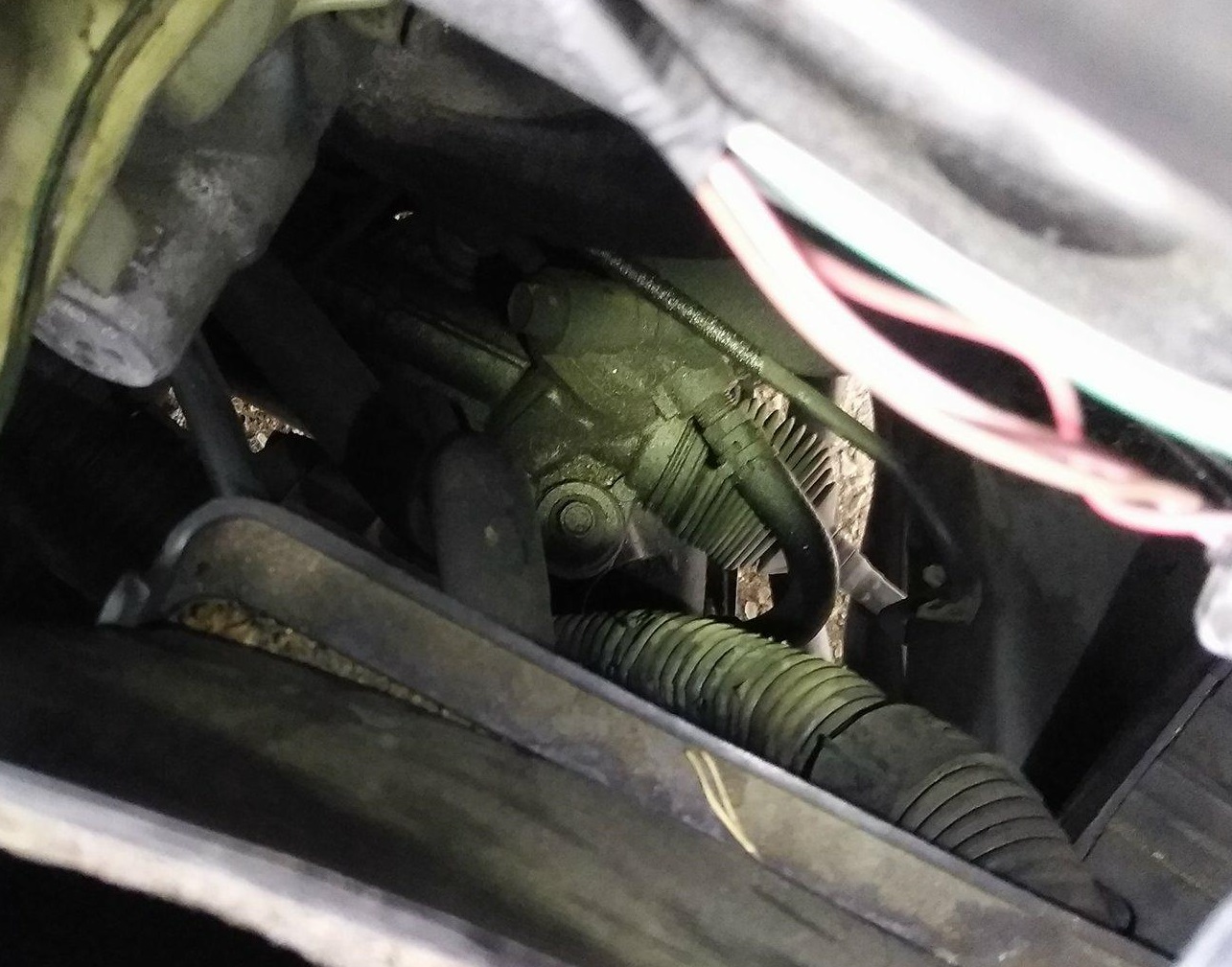 I went and poured a half bottle of Seafoam Hydra tune to see if it helped the stiff steering a bit. Steering seems a tiny bit less stiff… maybe it is just placebo or I just go used to the steering.

I took the vehicle for an inspection and they did an alignment and told me they couldn’t determine if the steering rack was the problem because the rack was wet, but it could be because of the other leaks the vehicle has. Axle leak for example…

I know it wasn’t an alignment problem but I took the keys and test drove the vehicle… Yep the steering is still stiff and still has problems returning to center. I took it back and they test drove it with us in the car this time after explaining everything I wrote here. The owner took it to the lift again and said well it’s the steering rack because if I can turn the wheels freely with my hands but not with the steering that means the rack is bad.

I ordered a remanufactured rack, but I was thinking… Should I replace the hoses? What if the pump is bad too? How do I go about troubleshooting this?

The vehicle has very little room to work with, and seeing what piece is what and what hose is what is rather difficult without taking everything out of the way. As far as I know, in order to access the rack and remove it, you have to take down the sub frame and unbolt the engine mounts.

I wanted to take the car to the shop on Monday but I decided to order an UV dye to try to spot where the leak is coming from first. I don’t want the rack to break again. Would like to read your opinions about this.

I wanted to take the car to the shop on Monday but I decided to order an UV dye to try to spot where the leak is coming from first.

You need to clean the area with a degreaser first, then proceed with the dye. Check along the p/s return and pressure line for leaks because they are usually found there.

Did your brother noticed the steering not returning to center after a previous alignment? Caster might not have been set right. A binding ball joint,tie rod etc can also cause that.

Are you referring to the alignment we just did? Or before this one? I thought of ball joints etc but a vehicle inspection by the mechanics only detected the rear strut leaking. They said the rest is fine. Maybe I should crawl under there and inspect it myself.

Should I try an alignment again?

Are you referring to the alignment we just did? Or before this one?

The car has been like that since he bought it. Previous owner said the car needed an alignment. Don’t think it is that simple.

Thanks, you are right. I will start making some calls and get some quotes.

I also sprayed the rack with de-greaser as suggested by Corollaguy1. I am waiting for the UV Dye now… It seems that the master cylinder is leaking too.

Could it be possible that the rack is only leaking from the inner tie rod boot area (seals?) and that the gunk on top of the rack could be from the master cylinder leaking too? There is a hose… wire? right underneath the cylinder and it’s wet too.

I thought the problem could be something like a ball joint but I had the mechanics check the suspension and they told me that aside from one rear shock, everything is fine. They also did an alignment and that didn’t fix the problem either. Also… the rack on the passenger side is also wet… not as bad as the other side though.

I have attached pictures of before and after the de-greaser. 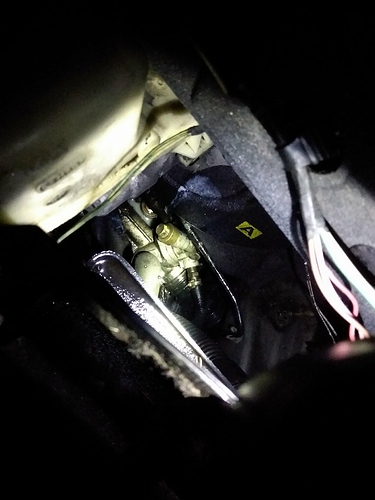 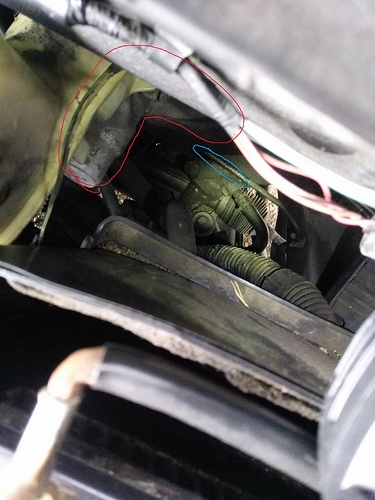 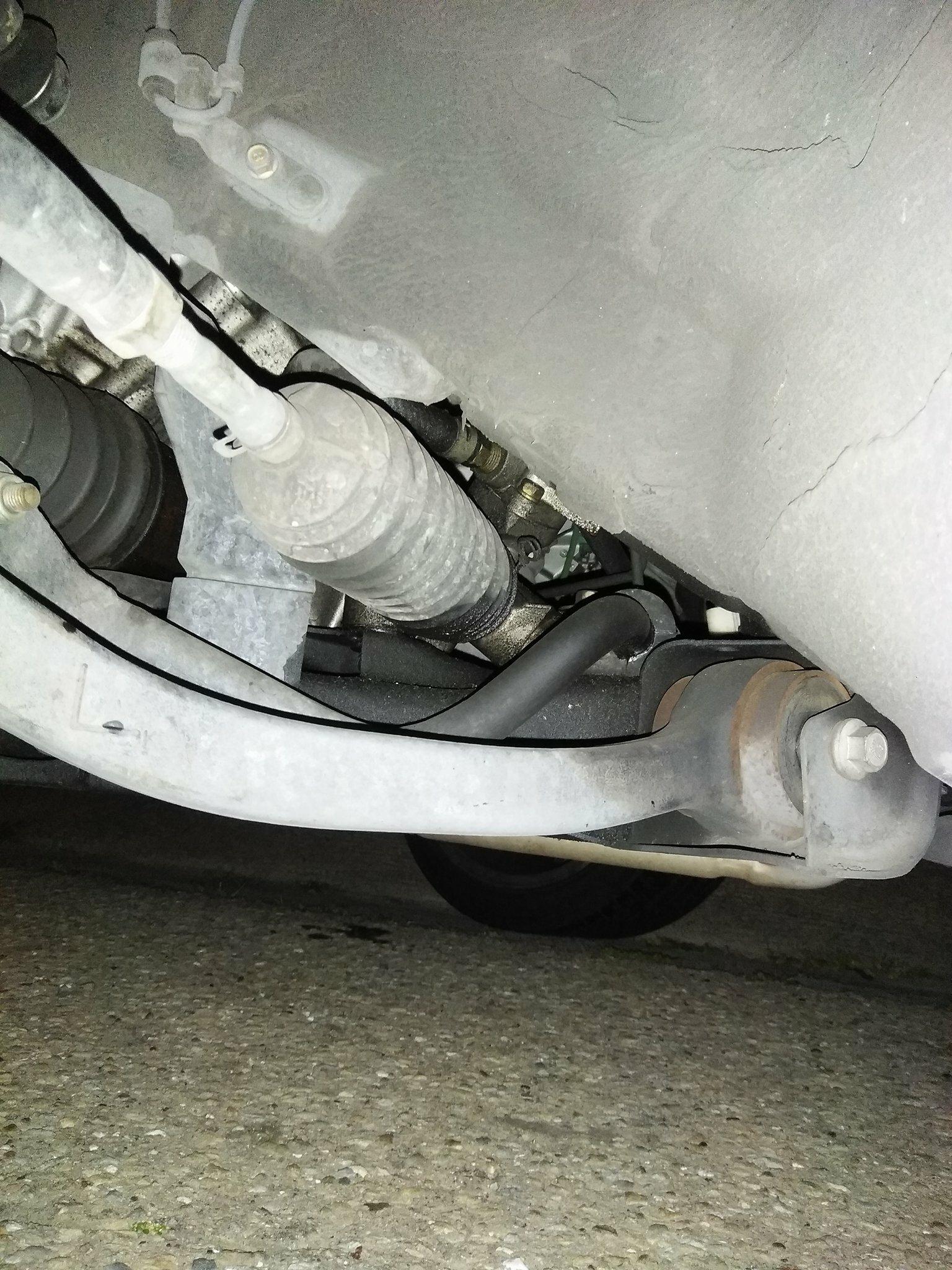 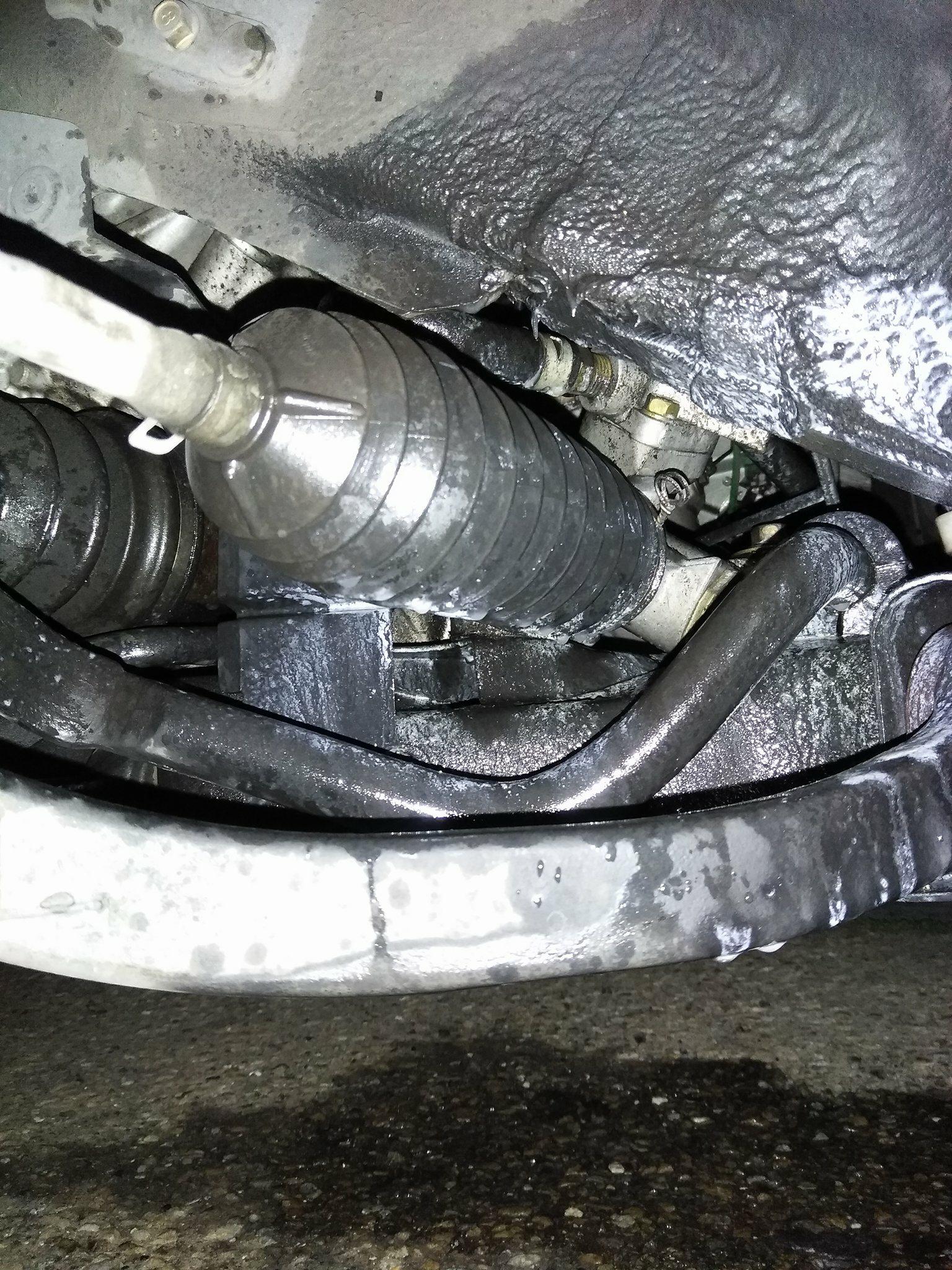 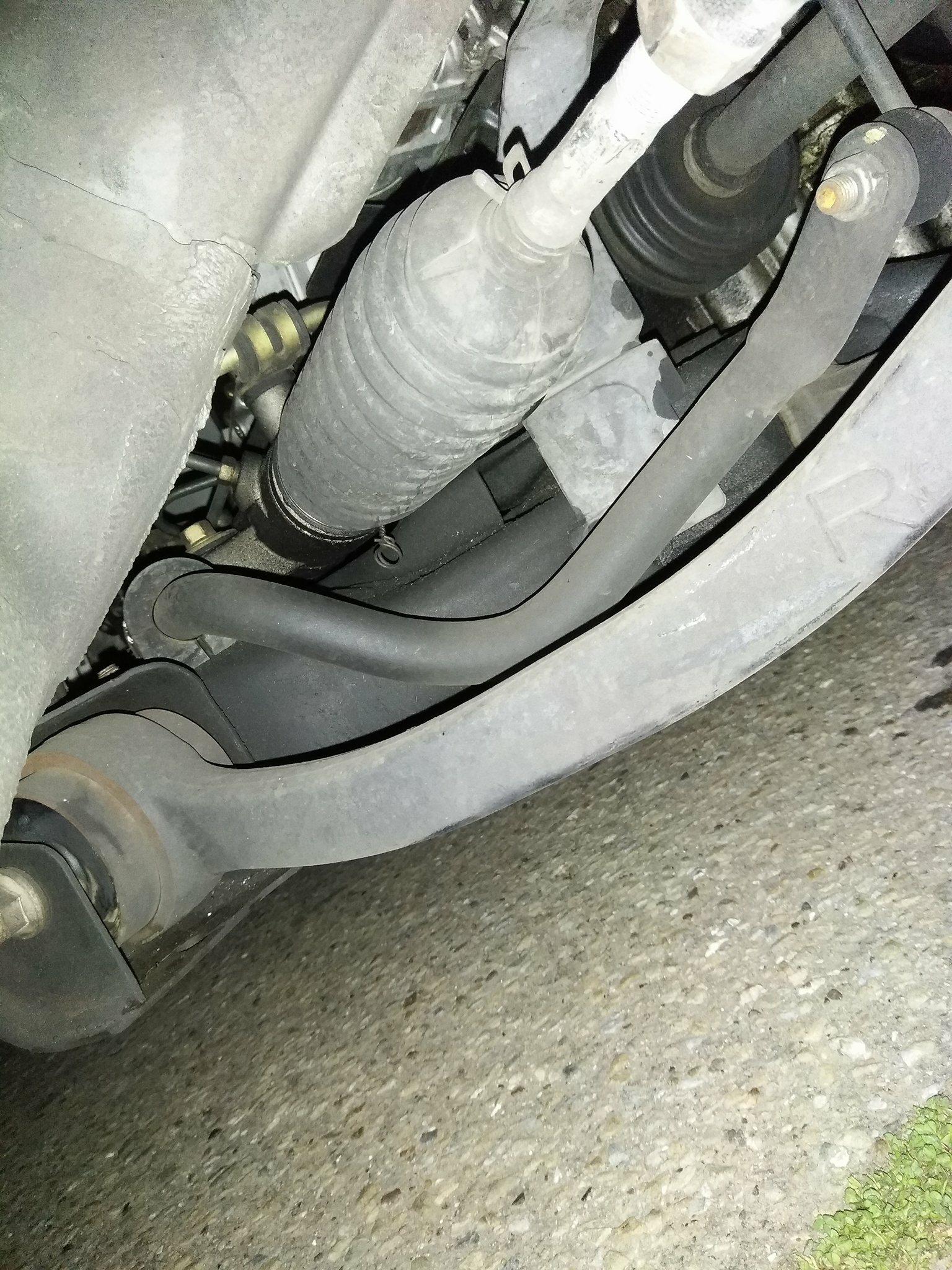 Your steering rack leaks questions? Such as ‘Why is there air?’ and ‘What is the meaning of life?’?

The photo’s aren’t diagnostic. Steering racks shouldn’t leak obviously, but a small leak wouldn’t normally be a reason to exhibit this symptom, provided it still has plenty of fluid left inside. I expect the symptom is due to a damaged rack rather than leaking one. Steering hard when hitting a bad pothole, etc. Never had to deal w/this problem myself, just a driveway diy’er, but it seems like it should be possible to remove parts of the linkage and do a few hands-on experiments to isolate whether the tightness problem is the rack itself, before the rack, or after the rack.

I cannot tell much from the pictures, make sure it is not a line leaking before replacing the rack, my advice.

In my limited experience a leaking rack can work fine, as long as there’s still enough hydraulic fluid. A leak causes loss of fluid, and with low fluid levels you’ll have symptoms you describe, but as long as the fluid is still full, a leak shouldn’t make the steering stiff.

Also, when power steering leaks are in the pressure hose or the pressure side of the rack the leak tends to be pretty dramatic, because there’s a lot of pressure in there. Levels would go down quickly.

Someone needs to inspect every single joint that moves in the steering system. Throwing parts at a problem gets real expensive real quick.

Alright I can see some spatters along the rack. I don’t see any leaks on any of the hoses. You can see all sorts of green under the driver side bellow, parts of the rack near the bellow and the surrounding areas like the subframe. I think it is because of the wind blowing the stuff to other parts of the car when you drive. On top of the rack there are some tiny splatters, but that’s it. The hoses are fine.

I think we will go ahead and replace the rack. I don’t see anything torn or worn as far as suspension goes.

Such as ‘Why is there air?’

To fill basketballs, of course.

‘What is the meaning of life?

The only answer I have is. If you are still alive you haven’t fulfilled your purpose yet.

If you are still alive you haven’t fulfilled your purpose yet.

Which seems to be injecting humor into ‘Car Talk’ fora.