I have had it sitting debating what to do with this car for 1 1/2- 2 years. I know it is not good to leave a car sit.

I bought a new battery and put some fresh fuel and also dry gas in the tank to freshen it up hopefully.

I started it and it will be crank but not start.

What are some things to start with on a car that has been sitting? The car started and ran fine before it sat this long.

Back to basics. Fuel, spark, compression. Test for each or spray some starter fluid in and if it pops you have a fuel problem. Is the pump running? My car that sat most of the time finally had the fuel pump not run. I called the salvage yard and collected $100

What is dry gas?

It is supposed to takes the water out of the fuel.

If the fuel tank was sealed it should start right up without having to do anything to the fuel after 2 years of storage. I just did this with a 99 Taurus even with 10% ethanol fuel in the tank. If the EVAP system is rusted and not sealed, then the fuel will have gone bad in 2 to 6 months. I don’t think the Taurus has a fuel return line, so the old fuel in the line will have to be purged using the valve by the engine.

It’s called heet. Used to avoid gas line freeze in the old days. Now to capture water in the gas.

If it still won’t start, you may be facing gummed up fuel injectors.

Contrary to the other comment, the gas tank is not sealed from the atmosphere.

Its vented thru the vent valve.

So you may be looking at bad gas clogging the fuel system. 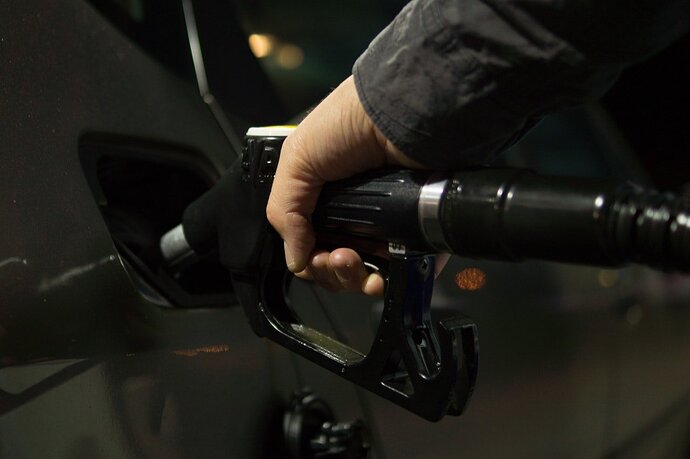 How Long Can Gas Sit in a Car Before it Goes Bad?

What happens to the gasoline inside vehicles when it stagnates for weeks or even months? How long can gas sit in a car before it goes bad?

Expect it to take considerably longer cranking time before it starts after sitting unused for a year. Fuel rail pressure leaks down to zero psi over that length of time. Engine won’t start until cranking turns on fuel pump circuit, and eventually results in fully re-pressurized fuel rail. One problem, car’s battery may be too dead to crank the engine that amount of time. In any event, good idea to only crank for 10 seconds at a time, then give 30 seconds for starter motor to cool down before cranking again. Ask shop to measure fuel rail pressure if you simply cannot get engine to start.

My Corolla has been off the road for 2 1/2+ years (Covid-related dispute w/state). I’ve been starting it once a week and letting it idle for 15 minutes, the last 5 at higher than normal idle rpm. ONly problme I’ve had is when car is parked on an incline, with rear of car highest, this caused water (from combustion during the long idles) to accumulate in exhaust pipes. Solved by parking car the other way around.

Awaiting updated information such as if pump is running but op put a new battery in. I’ve had one year old gas that was still ok but maybe two years is too long.

Hi. Thanks for the comments. The battery is brand new. I tried cycling it on a few times and back off.

There are a lot of noises during this time and I don’t have anyone else right now to listen for the fuel pump. I recall testing it this way once before turning it to the on position but not starting and did hear it from the drivers position easily. But I am not hearing it now. Perhaps it is the fuel pump. I will have someone help and listen outside the car tomorrow to see if we can hear it if I am just not hearing it from inside with the seat belt and door lock noises. If it is the fuel pump I assume it is inside the tank on this vehicle and a real pain to replace?

To quickly check if it’s a fuel problem. cycle the ignition switch on and off a half dozen times without starting the engine.

Remove the cap from the Schrader valve on the end of the fuel rail. 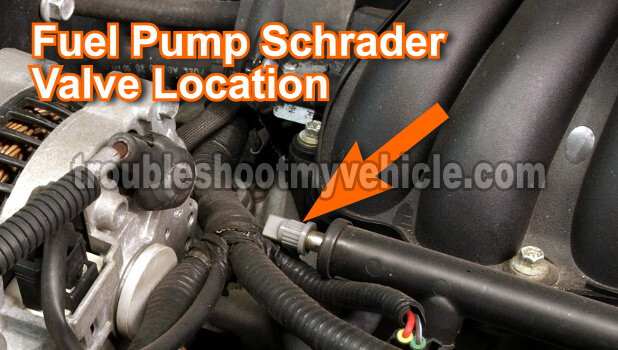 Depress the Schrader valve as if you were letting air out a tire.

If the gas sprays out, the fuel system has pressure and volume.

If the gas dribbles out, you have fuel system problems.

Fords of this era disable the fuel pump if the chip in the key is not recognized. I am not sure if a really dead battery might cause the car to forget it’s key coding, but it’s possible. Is the theft light staying on while cranking?

Fords of this era disable the fuel pump if the chip in the key is not recognized.

Also, it’s possible that the inertia switch for the fuel pump was triggered if the car suffered a big enough bump when it was put into its current resting place. This is something for the OP to consider, I think.

FUEL PUMP SHUT-OFF SWITCH
This device stops the electric fuel pump from sending fuel to the engine
when your vehicle has had a substantial jolt.

This switch is located in the front passenger’s footwell, behind a flip-up cover, by the kick panel access cover. There should be a panel to the outboard side (passenger door) side of the footwell just forward of the door.

To reset the switch:

What is dry gas?

It’s a type of fuel that contains alcohol. Water and gasoline don’t mix well, forming a layer of gas on top of a layer of water. Fuel Pump starts the lower level first, which is mostly water if there’s water in the gas tank, preventing engine from starting. Alcohol is a type of fuel that mixes with water better, doesn’t form layers, think Scotch and Soda.

I found this you tube video for anyone else with a similar problem in the future.

I am getting ready to test the schrader valve like TESTER instructed me to do. I am not hearing the fuel pump come on. Unless my hearing is just bad. But I have heard it in the past easily with this same car.

Car does the exact same thing as in this photo.Crank but no start. I am most certain it is going to be the fuel pump.

I’ve done that before and got a little pressure out of it but it was not enough, so just stand back when you do it in case the pump actually works. High pressure.

ABOUT THE THEFT LIGHT and KEY

I am not hearing the fuel pump. I have had the battery disconnected for the entire 2 years and also replaced it first with a smaller battery that was not the correct size as I was just trying to avoid putting too much into the vehicle before knowing if it would start and run well after all these years.

Is it possible the wrong battery size might have messed up thinking it was a theft issue?

I am getting a theft light and the doors continuously locking while the key is in the position to hear the fuel pump.

I am going to check in a few hours whether or not the theft light is solid or blinking on and off.

I am not getting a fuel pump sound so I am thinking it is the fuel pump or perhaps and issue with this theft and key. It is the original key and the car was not in an accident.

I have since purchased the correct battery as I thought that was the original issue it was not cranking over.

Is there a way to reset the theft system?