For many years there has been a small local car show several times a year that meets at a fast food restaurant near where I live. Only a few dozen cars typically are on display as opposed to other area car shows with hundreds of cars. I go to a few of the big ones but prefer the small one almost in my back yard. No big crowds, more chance to talk with and learn something from the collectors/restorers/hobbyists, and only minutes from home when the mosquitoes start swarming.

Last weekend was the most recent gathering. Two interesting entries I had not seen before; a 1909 Model T Tourabout and a 1969 Toyota Corolla.

The 1909 Model T Tourabout appeared to be pretty much original although I think some or all the wood in the floor may have been replaced. The sheet metal piece that runs on the side between the floorboards and running board was pretty rusted out to a spiderwork of paperthin metal. But the rest was in surprisingly good if somewhat heavily worn condition.

The 1969 Toyota Corolla was all original except for normal wear and tear items such as tires and other such which simply wear out and get replaced in normal use. I was impressed that the body hadn’t rusted to pieces!

What I always notice about vintage cars is how uncrowded the engine bay on most older cars is compared to modern cars. They look much easier to access for working on the engine.

I would have liked to have seen the 1909 Tourabout as I’m a sucker for antique stuff. The oldest car I’ve personally seen was a 1906 Oldsmobile which may still be in the OK historical museum.
It uses a rear drive chain like a motorcycle and a steering tiller instead of a wheel.

It must have been a real wrestling match working one of those down a rutted road with skinny tires and steering it with a stick.

I’m surprised by the corolla. I had a 73 Corolla that started to show rust coming through from the inside after about a year. But this was in the salt belt.

The Japanese manufacturers had major rust issues with all their vehicles until the mid to late 80’s. Wife owned a 1980 Datsun 510. That vehicle had rust through areas in just 2 years. Vehicle ran GREAT…just rusted out very quickly.

I think the 1969 was likely a CORONA, not a Corolla. The Corolla dates from the early 70s. The Corona was a sturdy little car and the first small car other than the VW bug that could cruise at interstate speeds without burning out its engine prematurely.

My 73 corolla ran OK when new, but by 25k miles had alternator problems, second differential going bad, and low compression on one cylinder. Plus the rust.

The Corolla was offered in the US in 1969. Didn’t really impress my parents all that much, they bought a 1970 Datsun 510 wagon (the corolla was only a 3dr wagon)Instead which didn’t rust much if at all in the 21yrs it was in the fleet. Now the 1973 Mazda RX3 rusted out within about 3 years.

I had one of those vintage Coronas, it was an absolute tank in the snow. Amazing little car. Had to have the transmission rebuilt but beyond that, it was relatively trouble free.

Not sure I’d call a Corona hot, but I do remember that distinctive ‘shovel nose’ front end: 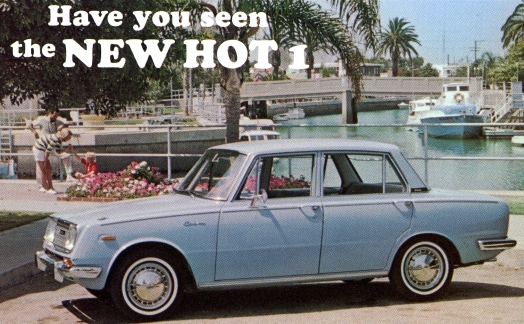 Hmm, possibly was a Corona. Small box of a car, hood opened from windshield with hood hinges at the front like many older European cars. Was definitely a four door with a trunk.

Looked quite similar to my first car, a hand me down 1973 Corolla. It was mechanically sound but zero creature comforts and prone to extensive rust. By the time we sold it at 16 years and 140k+ the body was half Bondo with spray paint.

The Corolla was introduced in -66 in Europa as Toyota Corolla KE10 with a 1,1 Liter engine and was a very reliable little car in those 3 years it took the rust to kill it.

Btw. Marnet, if the hinges was at the front, then it could not have been a Corolla. Those were hinged at the “rear” end.

“Wife owned a 1980 Datsun 510. That vehicle had rust through areas in just 2 years. Vehicle ran GREAT…just rusted out very quickly.”

My brother’s Datsun SPL-310 had visible rust after ~13 months, and because rust never sleeps, it only got progressively worse. As a bonus, the car leaked like a sieve when it rained, refused to start if the temperature was below 40 degrees, and suffered from really bad design flaws. Imagine selling a car whose air filter can’t be changed unless you first remove the twin side-draft carbs.

Japanese cars in the '70s were pure, unadulterated, crap, and this particular Datsun model was the poster child for their incompetence.

I’ve never seen a stock Corolla with “suicide” doors. Including my '76. They were all normally hinged.

Question: Those cars where the hood opened “backwards” (from the windshield); was there a practical reason for it, or was just a stylistic thing? Seems to me it would make it harder to work on the engine, as you wouldn’t be able to go at it from the front, you’d only be able to work from the sides, unless you removed the hood entirely. (I want to read and learn too…)

The picture of the Corona that @texases posted looks like what I saw. So I did get the Corolla and Corona mixed up.

@asterix Interesting to see how little the difference in appearance of that '67 Corolla in your link looks from our '73.

@Ed Frugal, I have no idea what was in the minds of various engineer in regards to backwards opening hoods but I would suspect it’s a combination of things. Styling may be some of it but the safety factor of a hood not being able to fly up, some possible weight savings in hinge mechanisms, and so on are likely part of it.

Personally, I prefer the backwards opening hoods and find engine accessibility to be a bit easier. That’s based on working on a few Corvettes including my own, a few Jaguars, and SAABs.
Given a choice, I’d prefer my Lincoln have a rear opening hood.

When I was in high school in the late 60s a classmate had a very slick '56 Ford. It was just a 4 door sedan but was like new. One weekend while on the way back to town and about 5 miles out the hood came up and smashed back at about 65 MPH. It broke the windshield and actually caved the front edge of the roof down on his head.

He wasn’t injured other than a minor bump on noggin but had to lie in the floor and use his feet to kick the roof back up some in order to make it on home.

It’s more difficult on fairly modern era cars for a hood to fly up but it’s also possible that it can; safety catch or no safety catch.

“I’ve never seen a stock Corolla with “suicide” doors. Including my '76. They were all normally hinged.”

TSM, I was talking about the hood, not the doors. I’ve never seen a japanese car with suicide doors. The pic from Texases shows a -67 Corona.

Marnet:
There was not a big difference in the design between the Ke10 and its follower, the Ke20. The biggest difference was probably a 1166 cc. engine instead of a 1074 cc. Even the -75 Ke30 model didn’t differ that much in design.

To the bigger issue, forward-opening hoods, I suspect it was purely sporty style, taken from the clamshell hoods of the Jag E-Type, Triumph Spitfire and the like. My '72 Vega had a forward opening hood, and I saw no advantage. If it had raised the fenders with the hood, like the aforementioned Brit cars (which I think took the idea from race cars of the era), it would have really improved access to the front chassis, but it didn’t. I cannot think of a single modern car with a clamshell front, but I always did like the setup.