Should I be wary of an aluminum engine block?

Not something to be worried about…as long as the engine has the proper coolant type used. Other than that as long as it is running fine…no worries.

Chances are your Nissan also had an aluminum engine. They pretty much all are these days.

??? not that I remember on the Vega, unless you mean the gap fillers for the 5 mph battering rams/bumpers…

In the late 60’s early 70’s Lordstown was known as the junk yard due to the poor quality of the cars made there. An interesting story I heard was a new worker would only be able to get about 3/4 or their job done before the next car came down the line, the next car only got 1/2 done, the next skipped, 3/4 1/2 etc. After about two weeks the worker could finish the job and sit idle for a few minutes before the next car came . Workers would ‘share’ jobs, one guy doing both jobs while the other guy took a breather, then they would swap. It actually worked well, until an efficiency expert saw this and cut the number of workers. There is no way for one person to sustain that pace for a full shift. The bad quality went to even worse. Many years later GM turned the place around and it became known for outstanding quality.

It was amazing how adversarial and confrontational the union/management situation was and often still is. In the 2 years that I worked on salary at a Teamster shop I had three grievances made against me and all three were quickly dismissed for obvious safety reasons and the vast majority of union workers agreed that I was right to make efforts to prevent accidents by moving material out of the way of fork lifts myself rather than leave them and spend time to get a shop worker to take care of the issue. Often the situation becomes a contest as to which side can be the most outrageous in its demands and obviously both sides lose in the end.

But as for aluminum blocks, does no one use steel cylinder sleeves in aluminum car blocks? Briggs & Stratton seems to still offer that set up in ‘commercial’ (?) engines.All the 8+ horsepower B&S engines that I have are steel sleeved but they are 10+ years old. 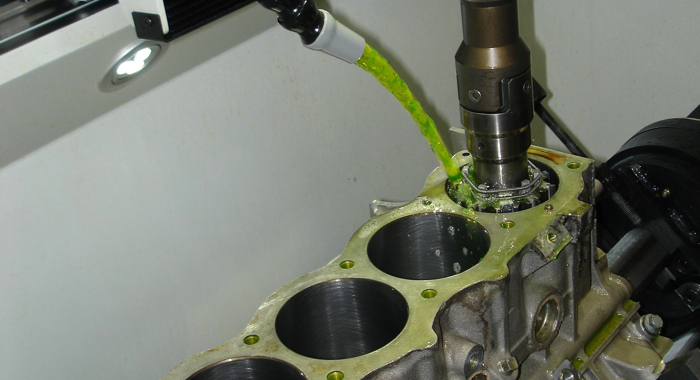 Manufacturers who produce “linerless” hypereutectic aluminum blocks today include Audi, BMW, Honda, Mercedes, Porsche, Volkswagen, Volvo, and Yamaha. Most late-model engines have aluminum blocks to save weight, including most of the familiar domestic...

Did you know that the Vega was originally supposed to be called the Corvair and the engine would be mounted in the rear? A neighbor of mine bought one of the first ones at the dealership and he noticed that the engine was completely enclosed in the front and the trunk didn’t have a floor. I broke in half about a week after he got it because there wasn’t a frame in the rear. The engine would have provided the needed rigidity.

Because of Ralph Nadar, GM decided to change the name and put the engine in the front but it was done on a rushed schedule so it wouldn’t get beaten to market by the Pinto.

I never heard of the Corvair link but the plastic body panels that turned pink were located below the front and rear bumpers. Or as friend observed, “Makes it look like it’s tongue and butt are hanging out.”

The saddest part of the whole Vega thing was that it was a very well conceived and designed car, way ahead of the stodgy Japanese competition, except the execution was lousy. And instead of “making it right with the customer”, GM and their dealers attitude was basically, “We’re the King of Cars so if you don’t like what we give you, too bad sucker.”

My next 5 cars were all Japanese.