With about 57,000 miles, my 2012 SRX suddenly started running very rough and rode like driving on a washboard. “SERVICE STABILITRAK” and the engine and traction control symbols appeared. Problem was severe carbon buildup in all cylinders and a broken intake valve spring in one cylinder. Anyone else had a similar problem??

Does your SRX have the V-6 engine or the V-8 engine?
The V-6 will run fine on regular gas, whereas the V-8 needs premium/high octane gas.
And, with both engines, GM specifies that only Top Tier gasoline should be used.
Have you been using Top Tier gas since you bought the car?
If you aren’t sure, here is a link to the list of Top Tier brands:
https://www.toptiergas.com/licensedbrands/

While the wrong gas shouldn’t have anything to do with a broken valve spring, using regular gas if you have a V-8, or using non Top Tier gas in either the V-6 or the V-8 could lead to carbon build-up in the cylinders.

A recent poster here had a similar caddy with the 3.6 motor and a broken valve spring. he was asking if you could remove/lift 1 cam to get out the broken spring. never did hear back from him. i inferred that shop wanted to remove heads to fix spring? maybe you did remove heads to see carbon buildup?

If this engine has gasoline direct injection . . . carbon buildup is common

And it’s not exclusive to Cadillac

Problem was severe carbon buildup in all cylinders and a broken intake valve spring in one cylinder.

A recent poster here had a similar caddy with the 3.6 motor and a broken valve spring

It appears the only engine available for the 2012 SRX is the V6-3.6L. It is indeed curious that another poster here with that same engine had a broken valve spring. Given the rarity of complaints here about broken valve springs, could make a person think there’s a design problem w/this engine.

OP: fyi, direct injection means the fuel bypasses the intake valve and goes directly into the cylinder; therefore no gasoline flows past the intake valve like in the more common fuel injection design. The problem is that the flow of fuel past the valve continuously clean it of carbon deposits and the like, and w/ your engine that’s not happening. This problem has reportedly been mostly solved in later direct injection engine designs. Ask your shop if they offer a periodic air induction system cleaning service that would help prevent this from occurring.

Thanks for everyones comments. Only engine available was the V-6. Have used top-tier gas only on a few occasions. Also seems like fuel injection additive would be a waste of money in direct-injection engines, which this is. Wonder why carbon build-up isn’t a problem with more cars considering the number of cars I see in non-toptier gas stations, I rarely hear about engines with severe carbon build-up and wonder why more aren’t affected. Maybe this V-6 is just a poor design.

Also seems like fuel injection additive would be a waste of money in direct-injection engines, which this is.

How did you come to that conclusion?
In my neck of the woods, NON Top Tier gas stations are the outliers, and only an extremely small percentage of gas stations do not sell gas that complies with the Top Tier standards.

I get my Top Tier gas at Costco–for 8-14 cents less per gallon than other stations–but even if I didn’t choose to patronize Costco, I could almost always find Top Tier-rated gas for the same price as the stations that do not sell non-Top Tier gas.

I think OP is referring to the fact that the fuel doesn’t enter the engine by flowing by the intake valves in DI engines – which has a cleaning effect – therefore carbon build up on the intake valve wouldn’t be affected much by the type of gasoline used. I guess it depends on where the carbon build up is happening. DI has no effect on the exhaust valve as far as I know. Where do they say the carbon is building up OP? Was it an intake valve spring or an exhaust valve spring that broke?

I rarely hear about engines with severe carbon build-up and wonder why more aren’t affected.

I saw a youtube from a Ford tech talking about the carbon issue with the Ecotech with direct injection and turbo. Seems like a big problem that hasn’t been addressed yet. He said Ford says no to carbon cleaner because then it burns up the turbos. So evidently now they are just swapping heads under warranty. That’s the extent of my info. 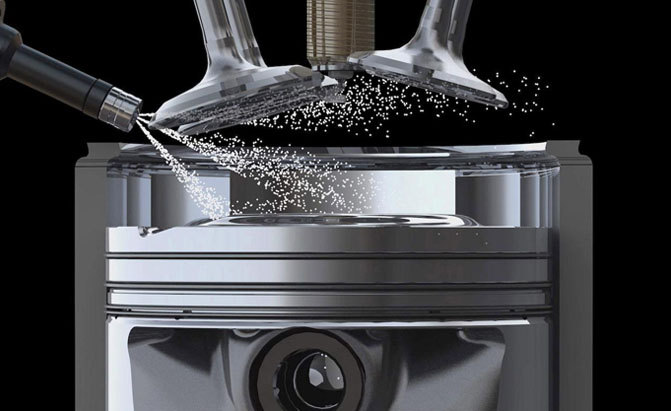 Is Carbon Buildup a Problem With Direct-Injection Engines? » AutoGuide.com News

Direct injection offers numerous benefits over port fuel delivery but could this advanced technology be a bigger headache than it’s worth?

Were heads pulled to fix broken spring? How did you inspect piston tops/ combustion chamber for carbon buildup? If only air flows thru ford turbo, how does injector cleaner cause issues?

Correction - I meant to say that I have used NON-TopTier gas only on a few occasions.

Carbon buildup was on the intake valves and intake manifold.

My local shop told me that they get a car maybe every two months or so with severe carbon buildup.

Did he show you the carbon buildup? How much was there?

I’m assuming the gunk is building up at the top side of the intake valves and covering the valve springs & keepers. Probably originating in the EGR and PCV systems, which dump their gunk into the intake/throttle body area, which then flows through and some of it sticks to the intake valves.