My daughter wants to get a 2015 Toyota Prius C.
I am very worried about the small size of the car in case she is in an accident.
I’ve looked at the crash safety test results. Only 4 stars.
Any insightful comments that could put me at ease about this tiny car protecting my daughter in a crash?
Thanks.

All cars today are quite safe, especially compared to big cars from the past. Formula 1 cars are tiny and routinely crash a 100 mph, and the driver usually walks away.

Your best investment is a Defensive Driving Course for your daughter. AAA has them, I believe.That will alert her to potential problems and avoid crashes.

The caliber of US driving schools is pathetic compared to those in most of Europe. I have had training in both the army and a large city police department.

Do not text and drive, do not drink and drive and always wear seatbelts. No texting and drinking avoids accidents, seatbelts are a tremendous help in increasing survive-ability in case of an accident.

Thanks, Steve.
I’m concerned about the safety of the car itself.
She is pretty good about the other things you mentioned.

There are not any what could be called unsafe vehicles made for many years now. Even if the thing only had 3 stars I would not hesitate to buy a vehicle if it was what I wanted.

Thanks for your comment and I will keep this in mind.

Thanks for comments. My biggest worry is some SUV hitting her.
I will look into the Defensive Driving course.
Thanks again.

This car rates a good on most catagories in the IIHS tests, the small overlap on the drivers side was only “acceptable” but it did earn top safety pick from them for that year. I know several adults who use these for commuting purposes.

It’s not a bad choice overall,

The Prius C is ok, but larger is safer to some degree. Doesn’t need to be huge. Up to a Camry hybrid would be fine if the hybrid is important.

According to this vehicle safety rating site, the Prius C is pretty poor compared to other new cars, mostly because of vehicle size/weight:
"LEAST SAFE [NHTSA side impact rating in bottom 11%] [79% higher driver fatality risk than the average passenger vehicle—based on class/weight] ".

Enter the model information and see for yourself:
https://www.informedforlife.org/display_vehicle_score.php

They put a lot of emphasis on vehicle weight: 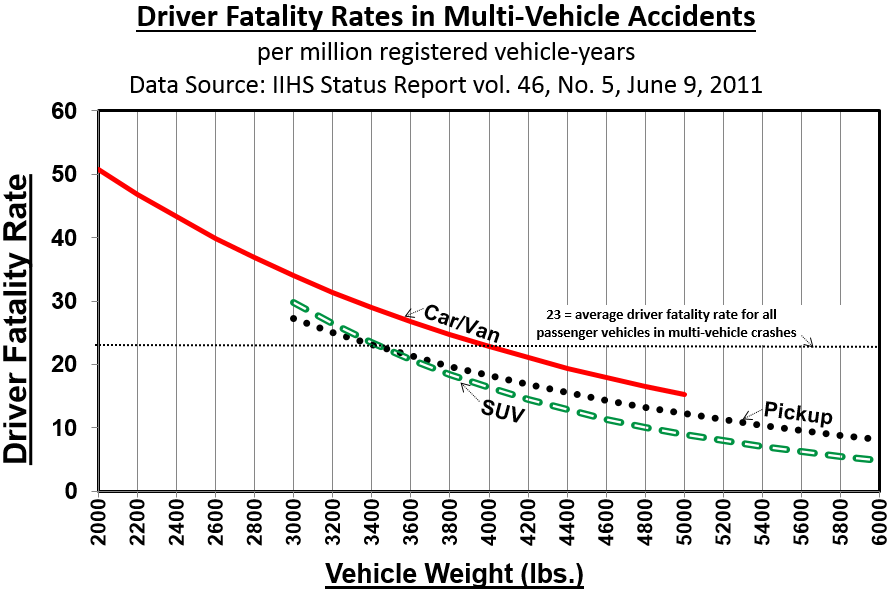 Unfortunately , the teenage fatalities in this area are not related to vehicle weight , size or category. Most are caused by not wearing seat belts , acting silly with other people in vehicle , losing control by driving too fast in poor road conditions ( rain-snow or just bad road surface ) and pulling out in front of cross traffic.

Driver error is by far the most common cause of teenage as well as other highway fatalities.

About 85% of fatalities are driver error, the rest divided between vehicle condition, highway condition, and weather. In North America vehicle condition is never more than 5%. So, common sense, a precious commodity, is the biggest factor is preventing highway deaths.

Young people may be good drivers but their lack of experience as well as carelessness causes most accidents. Ask any auto insurance specialist. Your teenage driver may be the best in the world, and drive the safest car, but his/her insurance rate will still be in the top bracket!

I disagree that fatalities are not related to vehicle weight. It is not the cause of the accident, but it has LOTS to do with the survivability from the accident. Assume two teens, belted in, both do something that causes them to crash - the teen in the larger, heavier car will definitely have a higher chance of surviving than the teen in the subcompact.

Maybe it I would better to say that driver error accounts for more accidents for new drivers, and that teens account for the largest number of new drivers. They see other drivers doing unsafe things and assume it is safe for them to do it too. One of my daughters rearended another car because she was following too close. She thought it was OK because so many others were doing it. New driver error.

When any driver, including new drivers, are involved in an accident, those in smaller vehicles are more likely to have more serious injuries that those in larger vehicles. In the extreme, a subcompact meeting an 18 wheeler typically results in a flattened subcompact with some undercarriage damage to the truck. The same applies to vehicles closer in size, too, though the damage will be more equally shared.

Driver error accounts for 85% causes of highway accidents, regardless of driver’s age.

Many years ago, cars were a lot less safe and subject to breakdowns., and road conditions, poor street lighting all contributed.

Today, however, the driver is by far the major cause of accidents. I’m including those who have heart attacks, strokes, or should not be driving because of a medical condition, but all these medical cases together are a minor part of the total. I have several friends who are accident reconstruction engineers, and they will tell you exactly the same thing.

Of people I personally know killed or injured in my life time, a sample:

I could go on for several pages, but I have yet to unearth an “act of God” type of accident where the driver (regardless of age) was not at fault or the car suffered catastrophic failure.

Thanks for taking the time to provide these examples.
Understand what you mean about driver error.
My daughter is a pretty cautious young lady so I trust her. My worry is the tee-boning example when someone hits her tiny Prius, the other driver’s error.
I’ll just resign myself to worrying about her.
Thanks again,

Thanks for your analysis.
It’s helpful.

If the Prius C is too small in the OP’s opinion, and a 4 star safety rating isn’t good enough, no amount of posting here is going to change any of that. So why not just buy the daughter a larger vehicle that has a 5 star safety rating? Seems a pretty simple solution.

I have ridden in both a Prius C and a regular Prius. To me the regular Prius was a decent ride but the C was too tiny and noisy. Apparently the gas mileage is not any better and I remember a few review videos not recommending the C and preferring the regular Prius.

I know there was a list of safer cars for teens, I believe on the NHSTA site that had listed the Prius V but not the regular Prius or the C.

Thanks for your comments