Hey guys!
I bought a 2003 BMW 320ci around 2/3 months ago. I absolutely love the car, big fan of the looks and drives great. As you would expect from a 20 year old car it does have little mechanical issues and one of them causes the rpm’s to jump up and now when i put my car into 1st gear and take my foot of the clutch pedal. at first i thought it was because I’m a relatively new manual driver so I thought I was just getting used to the car but now I know that its not normal.
The car idles perfect, no rpm change at all and its quiet. It’s only when I push it in first gear and start taking my foot of the clutch and when the car is starting to gain motion that the rpm’s start to jump up and down. Once I succesfully get into first gear and once the car is in motion with my foot off the clutch pedal, the rpm’s stop jumping and the car drives great.
The car idles at around 800rpms and the rpms jump to maybe 1100-1200 and drop below like 500 which is where it starts to stall and often stalls. I have learnt to give a little gas when pulling away so that the rpm’s don’t go too low when it jumps and drops so that it doesn’t stall but still this issue is quite annoying and i would love to fix it.
Does anyone have any idea what could be causing this? and how i could fix this?
Apart from this issue, the car drives great, no issues changing gears, it accelerates nicely, and seems to have had good maintenance.
Any help is much appreciated!

There may be a problem with accelerator pedal position sensor. 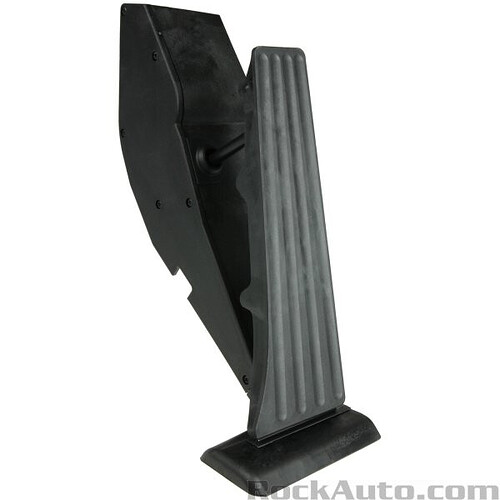 When you accelerate, this sensor sends a signal to the computer, the computer then operates the electronic throttle body.

maybe? i don’t have any check engine lights though. Also the rpm jumping happens without my foot being on the gas pedal, so not sure if there is an issue with it.

Which sounds exactly what you need to do to drive a manual trans car. If you don’t apply a little throttle, the RPM drops and the engine stalls.

I think the car itself is trying to maintain idle RPM when you load it down when letting off the clutch. It can’t because it was never designed to compensate for the driver staying off the throttle.

Bottom line… I think the car is acting normally. You need to always add a little throttle when letting off the clutch.

This sounds like a case for someone who is an experienced manual transmission driver to drive this and see if there is a vehicle problem.

If you don’t apply a little throttle, the RPM drops and the engine stalls.

+1
It’s been quite a few years since I drove a manual trans vehicle, but I know that all of mine required the application of a little bit of throttle when engaging the clutch.

This sounds like a case for someone who is an experienced manual transmission driver to drive this and see if there is a vehicle problem.

i fully agree, i’d love to have an experienced drivers opinion to see whether its normal or not.

If you don’t apply a little throttle, the RPM drops and the engine stalls.

I understand, I’m definetely not the most experience but I learnt to drive in a manual and have driven a few. i never owned one so i never got to master it but i was fairly confident. it just seemed weird the way the rpm’s jumped. but as suggested il try get an experienced driver to see whether it is normal and il also try driving my mums car to see if its any different.

The only cars I’ve owned with manuals that didn’t require a bit of throttle to move away smoothly were cars with big torquey engines. A BMW 320 is a 2 liter 4 cylinder… not exactly a torque monster!

Generally speaking, I agree. However, I knew a guy who had a stick shift 6-cylinder '57 Chevy, and somehow he managed to get it moving w/o applying any throttle. I think that he was slipping the clutch to some extent, but probably not very much. 'tis a mystery…

My '03 320 has an 2.2 inline 6 but still most definitely not a torque monster, lol.
My instructors car was no torque monster either, just a regular city car, but that one could pull away smoothly only using the clutch with no throttle. Also I don’t remember my mums peugeot 207 struggling to pull away without much throttle either. which is why i thought my car had an issue because i would very rarely stall when I learned to drive.

Have your mother drive the car.

Have your mother drive the car.

I will!, good cheap solution.

I’ve gotten a lot better at it, so now i rarely stall, but still i just feels a little more work then usual which made me question it. I really do hope its just me that needs more practice so i don’t have to dish out any money on parts and repairs so i’m very happy with these replies!

My instructors car was no torque monster either, just a regular city car, but that one could pull away smoothly only using the clutch with no throttle. Also I don’t remember my mums peugeot 207 struggling to pull away without much throttle either

Now that I think about i think that my instructors car and mums car pulled away smoothly with little to no throttle probably because they are both diesel cars which i believe have good low end torque. So i am probably used to driving manual diesel cars and this car being a regular petrol car felt very different but is most likely normal.

I once owned a 1948 Dodge. I could pull away smoothly without pushing the accelerator. I could even start away from a stop in high (3rd gear) without stalling the engine. Back then, the Dodge had a fluid coupling between the engine and the clutch. Once underway, I could stop at a stoplight without depressing the clutch. I could leave the car in high gear, take my foot off the brake and step on the accelerator and take off from the stop sign in high gear. Of course, the acceleration was painfully slow. I usually drove the car as I would with a conventional 3 speed manual transmission.
Plymouth improved on this with its introduction of the optional HyDrive in 1953. A torque converter replaced the fluid coupling that was in my 1948 Dodge. The torque converter multiplied the torque while the fluid coupling did not. The HyDrive could still be driven as an ordinary manual transmission.
In any case, maybe the OP might want to trade his BMW for a 1948 Dodge or a 1953 HyDrive equipped Plymouth.

The car idles at around 800rpms and the rpms jump to maybe 1100-1200 and drop below like 500 which is where it starts to stall and often stalls.

1100 rpms is too slow for a small displacement engine, increase the engine speed to 1500 rpms when pulling away from a stop.

Inline 6 cylinder cars of the 50s and earlier had a lot of torque down low and most would easily walk away in first gear without any throttle. Such is not the case with your car.

I was a city driver in Buffalo for a large Canadian trucking company. I was working the yard shuttling trailers when I saw a driver sent out from the union trying to start moving with his rig.

He kept stalling and I walked over to see if I could help. I asked him to open the tractor door so I could see what he was doing,

He was properly releasing the air brakes but he was just taking his foot off the clutch in first gear and expecting the rig to move. He confessed it was his first day out of driving school and the driving school had small lightweight trailers that were always empty .

He was trying to start out with a 43,000 lb load on the trailed the same way he could with an empty trailer.

Once I explained that he had to let the clutch out slowly until he felt it starting to grab and giving it fuel while releasing it gradually he got the hang of it without taking too much life out of the clutch.

Unless you are racing or driving a field car or farm equipment, you don/t really learn how to drive until after you get your license.

Some never do. The average driver today doesn’t even seem to know that there are rules about what lane to turn into on multi lane roads.

Your car has a dual mass flywheel, when they fail internally they can have those symptoms. If the engine doesn’t do it when you Rev the motor without being in gear that could well be it. If it still fails unloaded there may be an issue with the valvetronic system in the engine.

I knew a guy who had a stick shift 6-cylinder '57 Chevy, and somehow he managed to get it moving w/o applying any throttle.

Was he starting in first gear? This might work in second or third.