I’m looking at a used car on Carmax – here is the engine compartment of a 2013 Outback 2.5i Limited from Albany, NY. Compared to photos of other 2013 vehicles from the northeast it seems like this corrosion is excessive. I live in TN so I don’t know what’s normal for that part of the country. Is the damage purely cosmetic or indicative of future problems? Does it look like flood damage? Everything else about the car appears pristine. 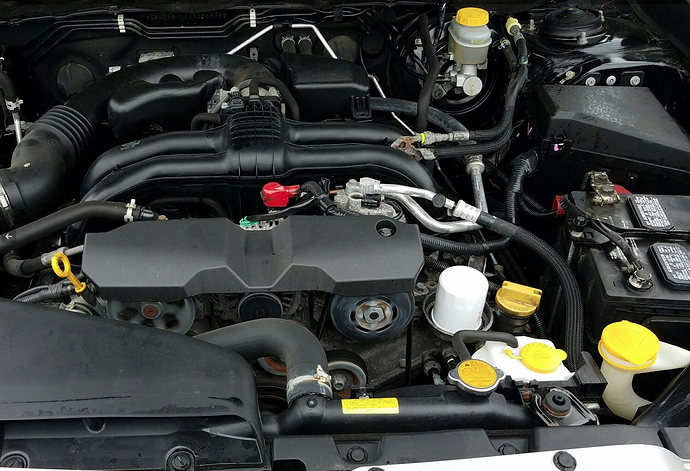 You’re comparing photos to photos to determine if you should buy the vehicle, instead of actually looking at it?

Your first major mistake is, you’re looking at purchasing a used Subaru.

Are you talking about the rust on the engine pulleys? Not a problem.

The rust on the pulleys doesn’t concern me. It’s the overall distressed patina of the engine and components and rusty hose/valve attachments. Again, all I have to compare it with is other vehicles from similar regions and this one looks worse than most, so I’m just trying to confirm if it’s typical for an engine after five NY winters. Thanks.

For Pete’s sake, it is a five year old vehicle. It is also all Wheel drive and if the rotation was not done on schedule you could have drive line troubles. I always say if a persons doubt about a used vehicle makes them go to a forum then look elsewhere for some thing that instills confidence.

I’d say that’s totally normal for a car from Albany. Most cars from snow regions are going to look like that. It’s nothing to worry about. You need to inspect the underside for rust, that would be a bigger problem.

My guess is that the engine was steam cleaned or washed off with Gunk or something similar which would account for the rust on the pulleys. If you’re considering buying a car located in up-state NY you really need to look under the car. They use lots of salt on the roads, and it’s not unusual for floor pans and body parts to rust out pretty early on.

That picture looks normal to me. The area you should look at is underneath the car.

Some parts will rust simply due to the humidity in the air.

I really don’t see anything in the picture but to look for flood damage, you need to look at interior body panels to try and see a water line. Like inside door panels or inside the trunk behind the trim. Also look under the carpets for rust, etc. But yeah salt damage is underneath the car and inside the door panels.

I don’t see any abnormal corrosion in the photo. However, I would NOT buy this type of car, especially at a place which charges top dollar such as CarMax. 2013 was the “changeover year” when Subaru switched from a timing belt to a timing chain on the 4-cylinder engine, and a lot of these engines have (or develop) major oil consumption issues. There are lots of better vehicles out there, some for MUCH less money. Personally, if I wanted a sedan, I’d buy a Toyota Corolla or Toyota Camry. If a larger vehicle is desired, I’d buy a Dodge Caravan or Toyota Sienna.