Pretty sure heater core is leaking. Should I check anything before tearing out dash to replace it?

My interior smells like fish. I hear bubbling in the dash when I start her up. Floorboard is dry and no mist on windshield. Is there anything else I should check?

s there anything else I should check?

Yeah, confirm it is the heater core, duh. Nothing you mentioned screams heater core to me.

Are you losing coolant? If not, a leak is unlikely. The smell may be from water standing in the lower reaches of the HVAC unit because of a clogged AC drain. The sound may be from low coolant.

Ask your shop to clean out the A/C drain. They’ll usually blow compressed air through the drain from underneath to clear it out. As A/C is used, condensation (water) is created, and drips into a pan under the A/C evaporator. Hole in pan has path through floor of car for drain. If drainage is blocked, stagnate water accumulates in the pan & all sorts of weird smells can occur. Drain is accessed from underneath car, sort of a rubber gadget hanging down. May require car be raised on lift in order to see it.

As posted above, gurgling sounds from that area often indicate low coolant level, or air bubbles in coolant. Not related to A/C drain. Wouldn’t explain odor though, no odor from low coolant or air in coolant. Has cooling system been opened recently, for example to replace coolant hose?

It smells like dirty coolant. I had this exact same situation happen to me in a old toyota when I was younger right before it gushed out. Just seems like too much of a coincidence, but I could be wrong.

Is there a way to test for a small leak? Thanks for the response.

No not yet. Waiting for the engine to cool down. If it is the core im assuming its a small leak. I wasn’t aware clogged ac drain water would smell like fish.

I haven’t touched the radiator in months. Ill see if I can blow some air through the ac drain. I park over rocks so I can dig a little ditch to fit under it. Thanks for the advice.

While you are looking at the drain outlet, good opportunity to check for any water-like substance w/the same color as your coolant. If you see that coming out of the A/C drain, good chance you have some sort a leak in the heater core. A heater core leak will often drain into the same pan as the A/C condensate.

Thanks for the advice. Im going to go put paper towels down below the drain and run the ac 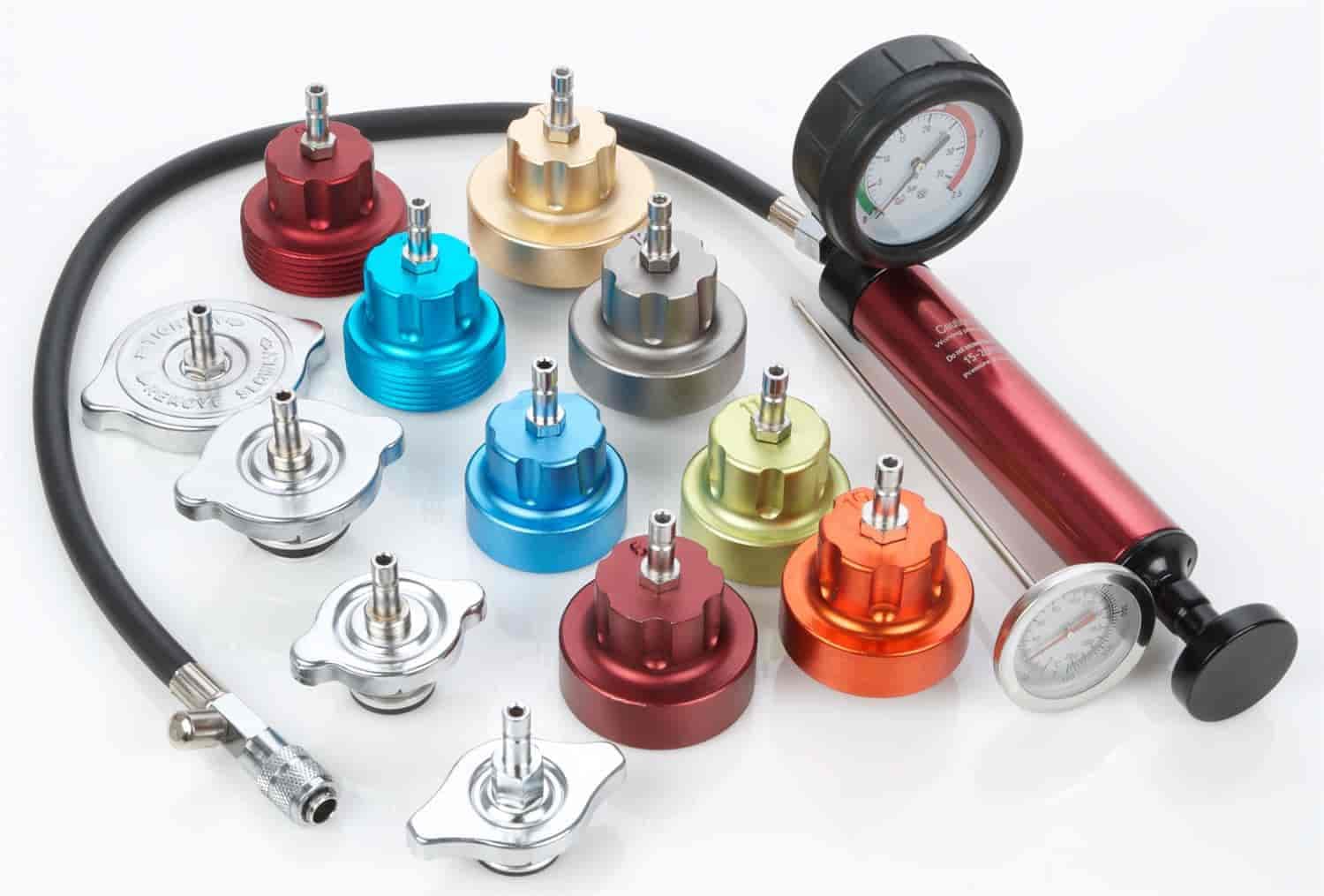 If it does, there’s no leak.

Make sure the tester has the correct adapter for your car.

If you think there’s a coolant leak in the heater core, a shop’s cooling system pressure test would confirm.

Water coming out of the drain is clear and smells like water.

Make sure the tester has the correct adapter for your car.

12 different adapters? … lol … You’d think some sort of agreement b/t auto manufacturers would be possible so the cooling system pressure cap is a standard size. A person might think this would be common sense. Maybe this is why I shouldn’t do my own thinking … lol … I suppose part of the reason for all the different sizes is that cooling system pressure varies engine to engine by design, and cap dimension helps prevent inadvertent over or under pressurizing b/c diy’er installed wrong cap for engine.

Water coming out of the drain is clear and smells like water.

Good news, probably not heater core leak, which would be very expensive to fix. Just normal A/C condensate. Question what’s causing the odor remains, if the drain appeared to be flowing freely.

Are you sure you’re not think of “Grumpy Old Men”, some one don’t like you? Just a thought.

The “fish smell” may actually be the odor of rotting small leaf parts marinating in the “pond” created by plugged drain tubes. “Eau de Swamp”
Removing the blower motor panel may give you access for cleanout and disinfectant spray…

My experience with a leaking heater core:
My wife called me “there is ‘smoke’ coming from the dash.” I get there, sweet vapor from the dash vents, leak in the heater core. My opinion (guess really) a heater core leak would produce visible condensate from either the dash (AC) vents or defroster vents.

I suspect the above comments concerning a blocked drain are most likely correct. My previous car collected oak leaves that block the drain tube, fortunately easy to clear.

Another potential source of odor-the air intake to the HVAC system in front of the windshield. It can collect leaves, etc. and plug the drain for that area. You should be able to see if stuff has collected there.

When mine went I barely made it home from Napa before the whole inside of the car was steam. This not something you want to do if you don’t have to. If you can connect that pressure tester just to the in and out heater hoses you could isolate it just to checking the core, but of coutse opening the system means introducing air and will need to bleed it.

Careful with the little ditch. The weight of the car can cause a collapse which might trap you under there. Probably won’t kill you.