So my parents 2001 Nissan Maxima was hit head on while parked in the road. Remarkably the front looks mostly fine even though it was hit. But the impact was hard enough to move it back about 4-5ft and hit the truck parked behind it. The truck is completely fine but the back of the car is really messed up I’ll post some pictures.
It still runs and drives but needs at the minimum new tail lights and the hood needs a little adjustment because it won’t close all the way. It also needs a new alternator, catalytic converter, some interior controls, and it could use but doesn’t really need new shocks.
Should I buy a parts car? I can get one for $500 with everything except the cat. Or should I just buy the parts to get it road worthy and leave the damage in the back?
Also I’m a little worried about transmission damage because it was hit while in park and skid about 5ft. What do you think? Is there anything else I should be worried about? 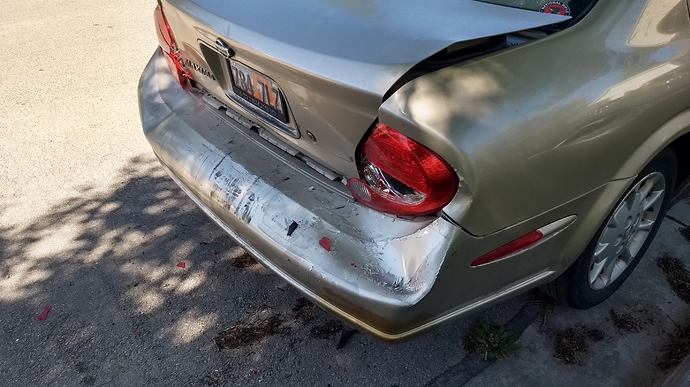 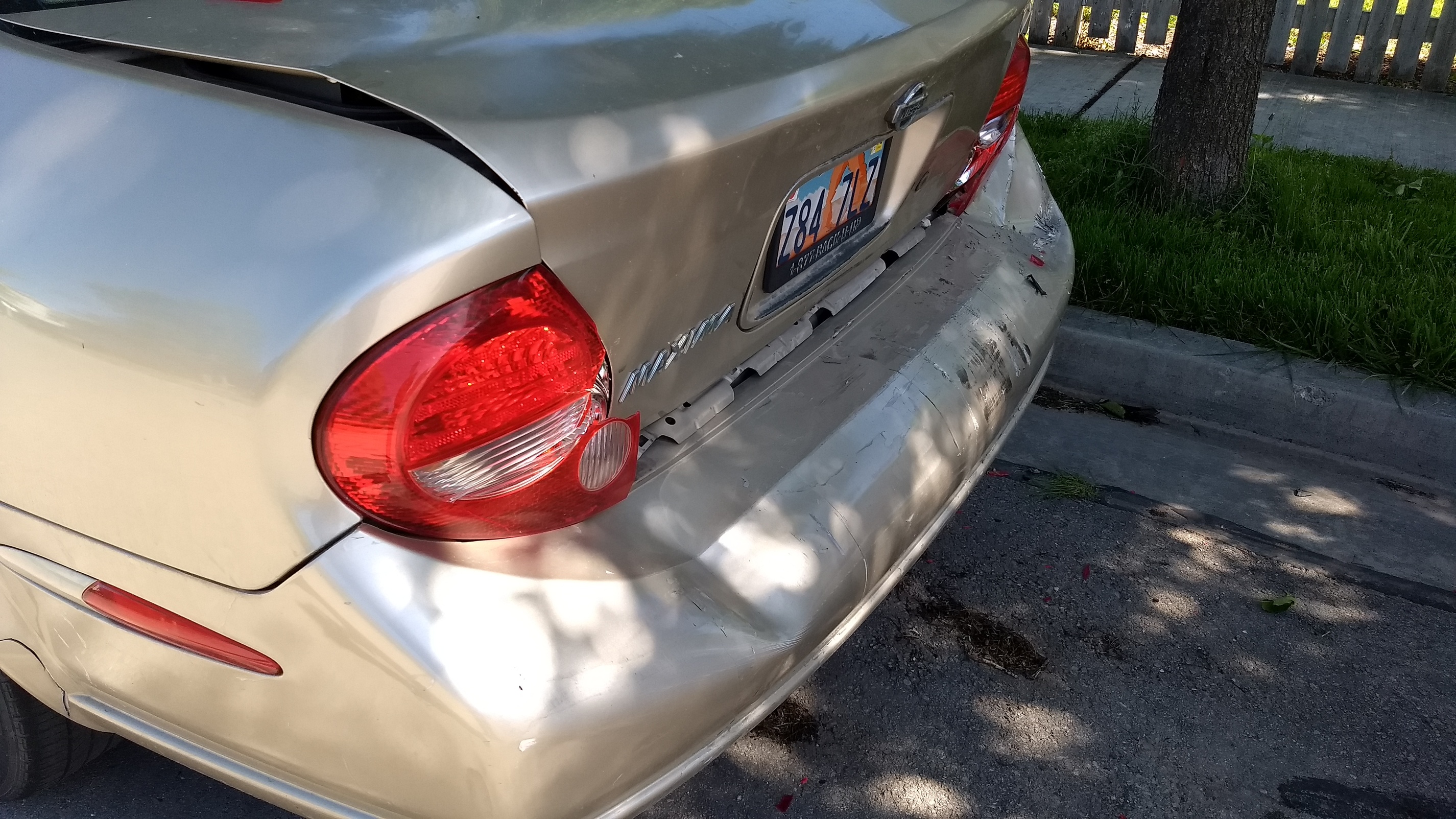 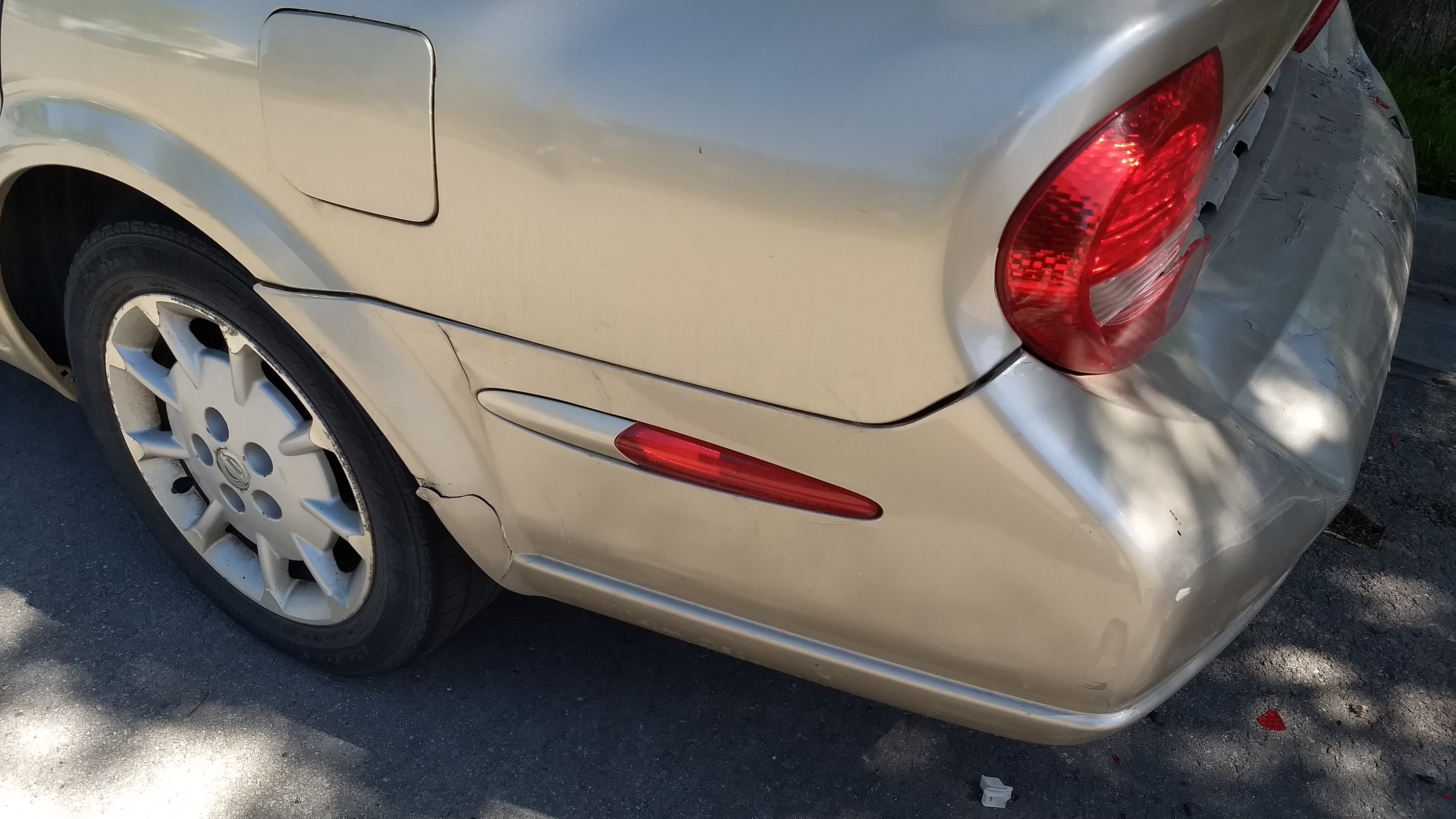 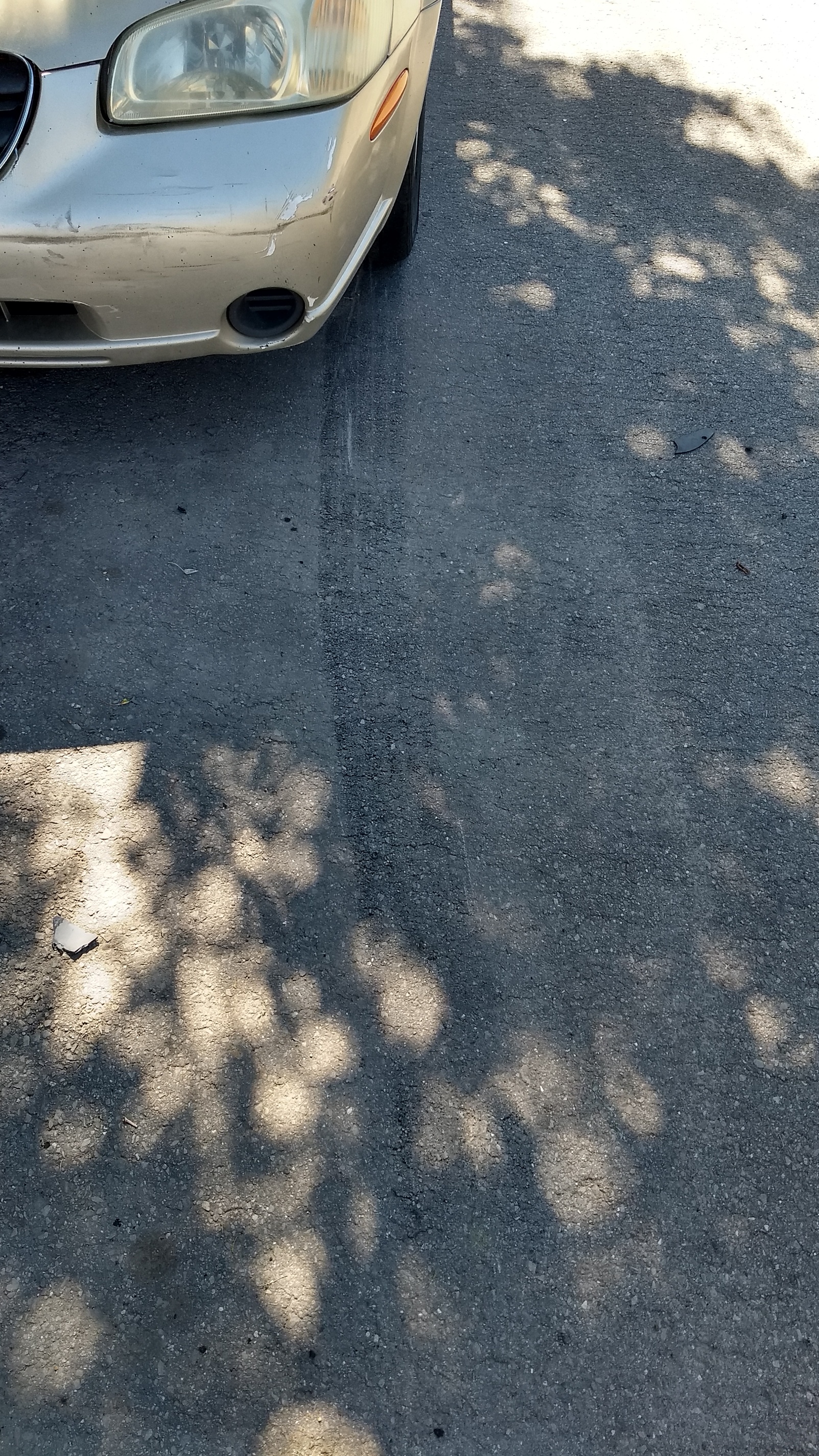 I doubt a 16 year old Nissan Maxima is worth much. If the cost of the repair is more than the value of the car,I would not fix it .Get another car when the insurance money comes in.

Yes, the insurance company totaled it but I’ll get it for $170 plus repairs. I think I can do everything it needs for less than $700. This will be my second car and a major upgrade from the one I have now (I’m still in high school).

When a trunk lid looks like that after an accident where the vehicle was squashed between two vehicles, means the uni-body has been compressed.

Don’t waste any money on this vehicle.

I very seriously doubt that you can make it run and safe for that.

I am looking at over $7000 damage. This car should not be on the road.

Just buy the parts you require as you need them. New ones from a parts store or used ones the local auto recycler, pick and pull, etc.

leave the damage in the back?

You’ll have to fix the tail lights to be street legal. I’ve repaired tail lights before, but it is easier if you can just find replacements from the junk-yard. You’ll have to repair the trunk so it closes properly, unsafe like that, and it will allow rain into the car which will quickly cause you all sorts of problems. If you are short on cash, it might be possible to simply bend it back in shape by removing the trunk lid and whacking it with a hammer it the right places. I expect you already know that this job is best done by a qualified auto body shop. I’m guessing you are underestimating the amount of work involved to get it re-titled again. But if you have a scientific mind and plenty of time, likely doable.

Forget it , 700.00 will not even begin to cover the repairs. That amount won’t even cover the other things it needs .

Even though it seems like the right thing, I think you need to just take the money from this one and run. Use the money to upgrade but as Tester said, there is likely some significant damage, not to mention the mechanicals. If the hood doesn’t fit right, that could mean damage to the radiator support and for sure there is a buckle on the rear quarters so you’ll never get a trunk to fit right. With all the other parts you need, just give a sigh of relief and get rid of it.

That is the type of car that I bought as a teenager, install a used trunk lid and tail lights, pound the rear panel back into place so it aligns with the trunk lid and I would have a vehicle so I wouldn’t have to ride a bicycle on 55 MPH county roads.

However if your parents are still in possession of this vehicle you have had the opportunity to inspect the front for hidden damage and to drive the car to assess the possibility of damage to the powertrain.

$170 is a small price to pay for the opportunity to learn about auto repair, even if you send the car to the salvage yard you will not have lost much. If you cower and run from this as advised you may become like some who are afraid to by a used car because of the lack of hands on experience.

At a cost of only $170, this does seem to be a pretty low risk endeavor. If all else fails, OP can sell it to an auto recycler for more than that probably, and book a profit. Or could get considerably more $$$ by selling it part by part. The engine alone is probably worth $400-$500. Reminds me of that 1950’s Leave it to Beaver episode where Wally buys a junker, can’t get it running, is told to remove it from the family garage, so sells it part by part and earns a tidy sum in the process.

I don’t know, I still think it is a waste of time and effort. Maybe junk cars bring higher prices where you are but I got $100 for my perfectly fine Aurora when they picked it up. Engine, trans, sheet metal, glass, interior, etc. all fine except for the fuel pump. This car would be a heck of a way to learn body work, me thinks. Most of us started with smaller projects like rust or door dings. Nothing like driving along and having the hood fly up because you didn’t know how to properly align the latch and repair the radiator support. Or flipping the car in the rain on a curve because the rear alignment was thrown off from the rear hit. This to me still looks like a disposable car and that’s what I would do with it. Lots of easier ways to learn if you want to.

I’m guessing you are underestimating the amount of work involved to get it re-titled again.

I’ve done some research but every article contradicts each other. According to my parents it’s fine as is, it just needs new tail lights to be legal to drive. A similar situation happened with another car if theirs and it got a branded title straight from the insurance company and they have been using it as is since. I know in some states you have to get it inspected and receive a rebuilt title but I’m not sure if it’s the same here in Utah.

$170 is a small price to pay for the opportunity to learn about auto repair, even if you send the car to the salvage yard

That’s my reasoning as well. Mechanically the car is fine, we’ve driven it and it had no problems. My dad is also good with cars and knows some people that do this kind of thing all the time. So I definitely won’t have to figure it all out alone. And all things considered it’s still much better than my current car so even if I can’t fix everything I’ll still drive it.

RE: retitling for continued use a car that has been declared “totaled” by an insurance company

I’ve done some research but every article contradicts each other.

I’m not sure if it’s the same here in Utah.

Take the applicable paperwork to the local DMV office and let them take a look. This is something they deal with every day. That way you are getting the information from the horse’s mouth. This can almost certainly be done, but you need to understand what all is involved.

You’d enjoy to take a look at this tv episode I think. Leave it to Beaver, Wally’s Car, Episode 3, Season 5

Without telling his parents beforehand, Wally buys a non-operating jalopy for $25, hoping that he can fix it up and get it running by the time he learns to drive. But Ward and June - more so the latter - don’t feel he should have a car, especially such a broken down one, at his young age. So he agrees to get rid of it, but asks for a couple of days to be able to sell it so that he can get his money back. In those two days with no prospective buyers in sight, the car causes some problems in blocking their functioning car from getting up and down their single drive driveway, and for the Cleavers now being seen as the bad neighbors with the junk in their front yard. Ultimately, Ward and Wally take different paths in figuring out how to get rid of the car without taking a financial beating

Mechanically the car is fine, we’ve driven it and it had no problems.

Earlier, you stated it needs and alternator and catalytic converter. I wouldn’t consider that to be mechanically fine.

Despite the warnings I decided to fix it up anyway. My logic behind this is I would spend much less money fixing this car than I would buying a decent car. In my area a decent car can go from $2000 - $4000. And I’m not one to back away from a challenge and thought it could be a fun learning experience.
So the first thing I did was take off the front bumper cover, the actual bumper was pushed in and about 2 inches away from the condenser. It had also dented the hood locking mechanisms support bar and that made it go down about 1/4 of an inch, just enough that it couldn’t latch. Next I went to the junk yard and got a new bumper, several other support bars that had been damaged, tail lights, a trunk lid, rear bumper cover and several other minor things. After replacing everything the hood closed and latched perfectly.
Next I took off the rear bumper cover and found no damage to the bumper however the frame was pushed in about 4-5 inches. So me and my father just pulled it out, it was surprisingly easy. After that we used a hammer to fine tune things and make the new tail lights fit. After putting on the new trunk we were able to get it to close and open normally with some fine tuning.
I also got an alternator and battery and will be replacing it today.
The total cost to replace all the damaged parts, the alternator, battery, and some other minor things like a/c recharge, oil change, new blower motor resistors, etc. was $450.
Personally I think that’s a great deal. And I had a lot of fun working on it. 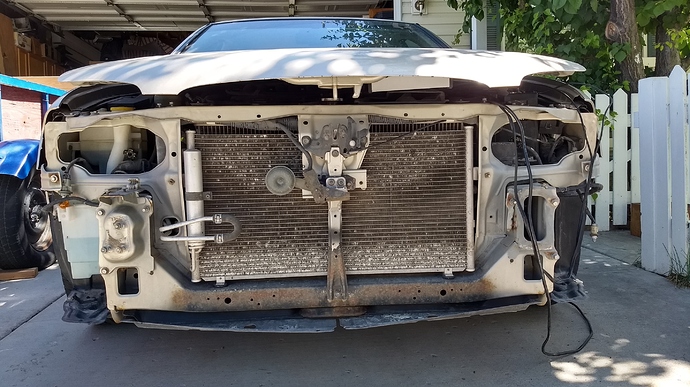 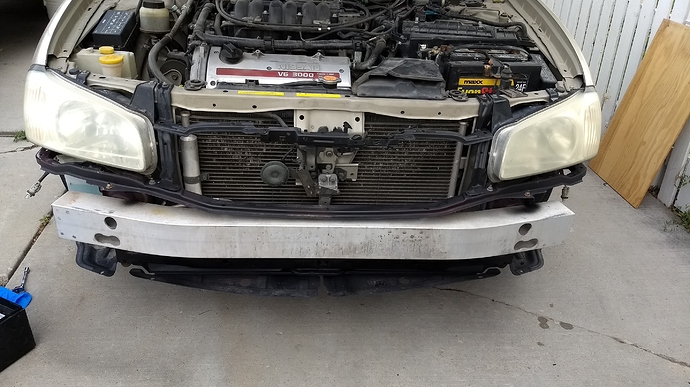 Front all back together 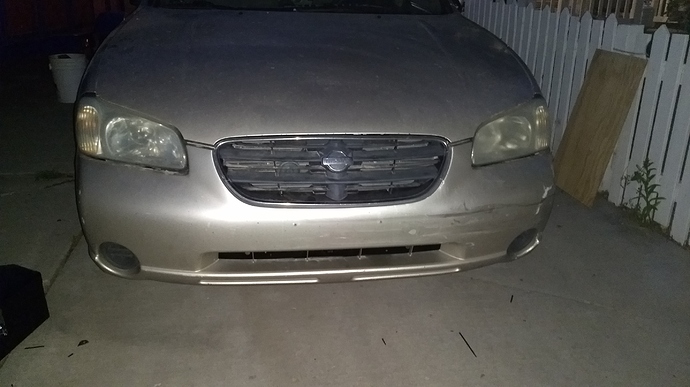 Everything removed from rear 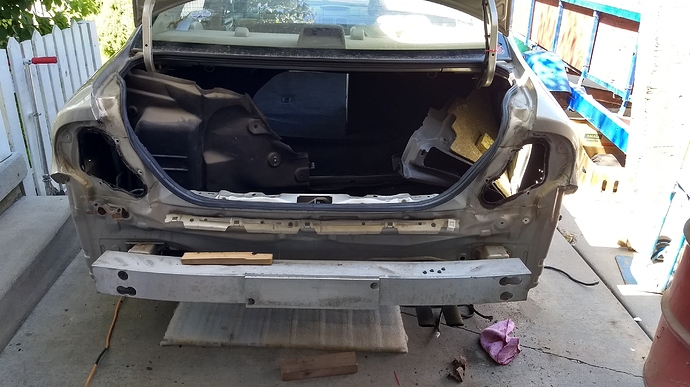 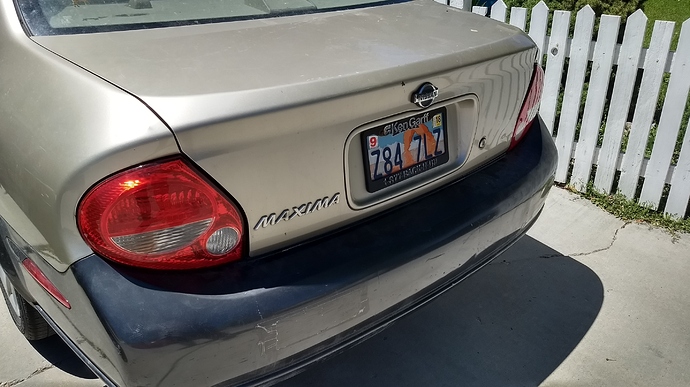 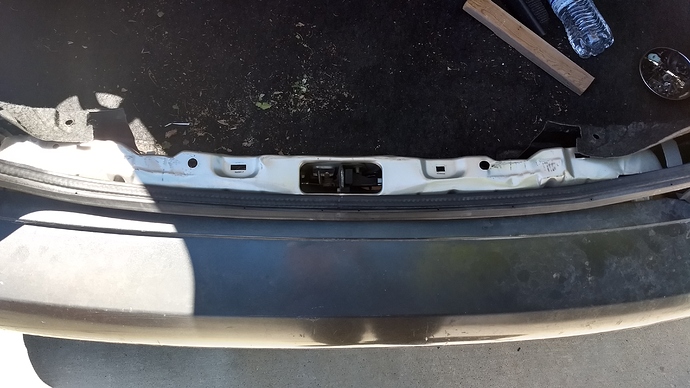 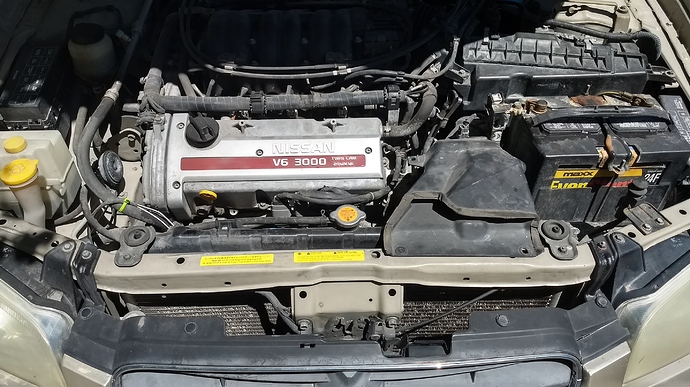 Looks good to me.

Now comes the hard part, getting it licensed and titled so you can legally drive it on the road. Hope you have all the receipts for the parts, and the paper work showing you had a legally owned donor car for parts you used. You’ll have to prove beyond a doubt that you didn’t use any stolen parts to repair this car.

Hope everything works out on this car. Kinda nice to see something being fixed up in today’s world which tends to be a throwaway one.

Well I’m impressed. Looks like a good job and you found parts in the right color?

Had fun and learned something. Congratulations!