I’m reading the Reader’s Digest book published in 1981.
That means it was written in 1980, presumably about cars of the 1970s!
I was shocked to see how current and relevant it is.
Tons of stuff that I assumed was only found in post-2000 cars are in the book

Only $4 shipped… A great read. 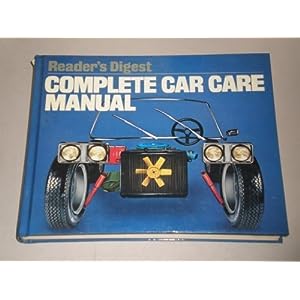 Yup!
All of that stuff has been around for longer than you thought.

Does the book also mention those “wonderful” electronically-controlled carburetors of the early '80s?
That was a truly troublesome piece of equipment.

Looking at it from another perspective–wasn’t GM’s small block 350 engine designed originally in the 1940’s? Amazing that it is still around in nearly the same form.

Most of the things on cars have been around for many decades, but not necessarily in the form they are today. Fuel injection was originally vacuum operated. Platinum spark plugs have all been replaced in new designs with irridium spark plugs. Aluminum head were just coming into favor, as were aluminum blocks…which got off to a very bumpy start.

Fuel injection goes way back, the Germans used it at the beginning of WWII in their Bf109 fighter, provided quite an advantage in combat over the then-carb-equipped Spitfires and Hurricanes. Certain manuevers would cause the Merlin engines to starve for gas.

The key to modern cars’ combination of power, good fuel economy, and low emissions is the computer that coordinates all the different engine functions and technologies. Just having fuel injection or electronic ignition or variable cam timing or a turbocharger wasn’t enough.

VERY few American-made cars had fuel injection in 1980…Nor did they have cam sensors or throttle position sensors. Cars built before 1975 had virtually NO electronics at all. The Bosch injection found on many European cars was 100% mechanical…

Beginning in 1981, the first electronic engine controls appeared, producing some of the worst cars ever made…The lost decade…Some manufacturers simply paid Bosch licensing fees to use their injection technology and moved ahead quickly into the age of electronically controlled fuel injection… Others tried to develop their own systems (Chryslers “lean-burn” and Honda’s CVCC" but in the end, they ALL finally went to multi-port electronic injection and retired their 1950’s engine designs.

The basics have been and always will be the basics. Air, Fuel, Compression, and spark in the right order gives you boom… Its amazing how many “mechanics” forget this… It does not matter how many computers, sensors, and other witchcraft you use… The basics are the basics… Know them, love them !!

Many of the “blocks” of motors have been around since the '50’s. There were a lot of changes in the '70’s. Compare the motors of 1968 to 1978 and you’ll see many changes in heads, fuel systems, and ignition systems. All to cope with pollution control requirements. Many of the items mentioned by OP were available in the '70’s but were used only in a few vehicles, often higher end cars and California cars. These things became more commonplace and were put on all cars as pollution requirements got stricter. Remember CA started with pollution controls so CA cars had more “high tech” gadgets than the rest of the country for about 10 years.

Too bad that Studebaker was so far ahead of their time that people thought it to be odd.

in 04 or so GMC tried the Envoy XUV…a la Studebaker Wagonaire !

“Too bad that Studebaker was so far ahead of their time that people thought it to be odd”.
Here are a couple of Studebaker firsts: 1) electric car in the early 1900s. The Nissan Leaf has nothing on Studebaker. 2) lockup torque converter on the automatic transmission introduced in 1951.
If you put Nash into the mix, Nash introduced the heating system that brought in fresh air from the outside in the late 1930s. In 1954, Nash integrated the heating and air conditioning systems and had all the components under the dash or hood. GM had the evaporator and fans in the trunk at this time. Let’s not forget that Packard made air conditioning available as an option before WW II.

My 1969 Corvette has fiber optic cables that run from the lamps to the center console to illuminate lenses so you know if your brake/turn lamps are working. Did I mention it’s a 1969?

No, I don’t know of any fwd or supercharged Packards. Duesenberg had supercharged cars in the '30s, just about the best in the world, and Cord (among others) had fwd in the '30s.

Packard DID utilize a supercharger on a few samples of their brand-new straight-8 engine for the 1954 model year. Why they decided to introduce a new straight-8 just a few months before their new V-8 was due for roll-out is something that still puzzles people. On the sand at Daytona, they managed to get one of these huge supercharged beasts up to 113 mph. However, all Packards were RWD.

Cord did utilize FWD, but in its first interation, on the L-29 model, forward traction on an inclined gravel road was so poor that owners had to back up that type of hill in order to eliminate wheel-spin. That problem led Groucho Marx to sell his Cord fairly soon after buying it. The more familiar coffin-nosed Cord 810 had the engine mounted further forward than the L-29 did, thus reducing traction problems.

Ahhh! I remember recommending that book…As I said, it is a bit outdated but all the basics are still the same.

Yes, it seems like the 1980s really were a pivotal decade in cars. Sacrificial lamb.
Today’s cars are so much more reliable with all the electronics, sensors, etc.
Less mechanical stuff that rattles lose and needs adjusting, etc.

The Cord 810 was front drive and available with a supercharger. I just saw a 1927 Austin 7 (Chummey) that had an aluminum engine, transmission and body. All this on an economy car thet weighed 1200 pounds. Chrysler made many slant-six aluminum engines in 60s and Volkswagen Beetles of the 40s,50s,60s and70s were all aluminum engined as were Porsches.
I wasn’t aware that anyone was still using fan clutches.

From Arizona , a 1955 T-bird is in the shop today making everyone salivate !
Nice and simple.
leaks we can fix today, Saturday, brakes and fuel.
And, yes, I still have the original ford parts books for this car.

Actually a lot of the technology we take for granted on cars was invented in the early part of the 20th. century. Turbos, superchargers, fuel injection, the planetary gear set, universal joints, electric cars, air conditioning, all were invented in the early 1900s. Obviously they have been refined and improved since then. The biggest innovation on cars in recent times is likely the application of digital computers to manage engines and other automotive components. Close runners up would be modern safety features and radial tires, I think.