Phone Makers Could Cut Off Drivers. So Why Don't They? 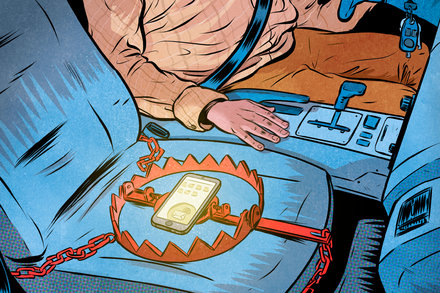 Phone Makers Could Cut Off Drivers. So Why Don’t They?

Apple and digital giants have developed potentially lifesaving technology to block texting while driving, but it’s still not being deployed.

The answer is right in the article:

they cannot shut down a driver’s service without the potential of
mistakenly shutting off a passenger’s phone or that of someone riding on
a train or bus.

If technology were used to drop cell phone service in moving vehicles the freeway shoulders would be crowded with vehicles pulled over for drivers to make and receive earth shaking communications. It’s hard to believe that humanity survived prior to cell phones… But honestly, I can’t understand what people feel compelled to talk about incessantly.

If your daughter were kidnapped, or assaulted by a date in a car’s back seat, and tried to call 911 from her cell phone, would you want the phone company to automatically disable the call?

It’s generally considered a good thing that a passenger can make an emergency call while the driver drives.

Statistics indicate that there were over 5 million auto accidents last year with 33,000 deaths and cell phones were responsible for 1/4 of the wrecks. How many women were raped in cars on the highway last year?

IMHO the value of having a functional phone in an emergency situation in a car is too important to have cell phones automatically disabled in cars. I’ve also received while in my car numerous emergency calls over the years. Some were from friends stuck in snowstorms, some were from my daughter in hysterics having just gotten hit by an errant driver. I would not want my phone to have been disabled automatically by the cell provider without regard to the calls importance. In NH, it’s illegal to drive a car with a handheld device. The penalty is stiff, and the law is enforced. And, ,if it was a factor in an accident, it can also create liability. To me, that’s the best solution. It penalizes drivers who misuse handheld devices without stopping the phone’s availability in an emergency.

Now, if only they could include hamburgers, breakfasts, newspapers, pizza, and cups of coffee under the definition of “handheld devices”.

Now, if only they could include hamburgers, breakfasts, newspapers, pizza, and cups of coffee under the definition of “handheld devices”.

Another problem, if phone makers prevented cell phone operation for one reason, soon they’d be asked to prevent it for others. There’s no telling how often Americans are annoyed by inconsiderate cell phone users, and the cell phone industry know this & know they would get the blunt of those complaints if they started down the path of turning their customers cells phones off in a particular calling sistuation.

How about requiring this only on the phones of people who have been ticketed for using their handheld while driving?
Kind of like the breathalyzer ignition lockout put on cars of those convicted of DUI.

How about requiring this only on the phones of people who have been ticketed for using their handheld while driving?

That’s an interesting idea, but would be really hard to implement real-world. You’d have to get Apple, Google, and Microsoft to write software and then you’d have to figure out how to lock that software down so that it couldn’t be disabled – and at least on Android it’s pretty trivial to disable anything that’s pre-installed on the phone by rooting it, at which point you can do pretty much anything you want, including deleting annoying programs that turn the phone off at speed.

Perhaps the service provider could query the phone periodically to see if it’s been altered.
If so, fine the owner.

I saw a guy playing the french horn on the highway in a construction zone once.

I hate people using their cells and especially texting - cutting off cell service while in a vehicle is not a viable solution.

I certainly wouldn’t want to be without Google Maps & Navigation in my older vehicle. Plus I would definitely need it for work rentals since they don’t pay for the navigation display option.

OMG how did we ever get anywhere without GPS. While it is extremely convenient it is by no means a necessity. Sorry always-fixing not a good enough reason in my opinion.

Try going on a road trip for work and having to drive in the dark in an unfamiliar city.

For some people it is. There are times it’s necessary. Business trips to cities or countries I’ve never been to.

So you are the CEO of Fruit Phones, Inc. Never mind all the complaints from people on buses and trains (I take trains so I can use my phone and laptop while I travel), what about your company’s liability when:

Not to mention all those nasty letters from parents on those long, long car trips where their bored kids can’t play mobile games.

I hate people using their cells and especially texting - cutting off cell service while in a vehicle is not a viable solution.

I agree with you 100%! If someone is using cell phone while driving, he/she must remember that he/she is not playing with their own life only but others’ as well.