Was watching some YouTube videos to check the radiator hoses temp because my engine just seems abnormally hot compared to other vehicles I’ve driven. My upper hose reaches 180-195f degrees and the lower one is the same. Neither are more than 8 degrees different. Is something not working? My temp gauge does vary (see photo) but it’s always between the same regardless of the outside temps (-5° to +105°). It’s doesn’t go past the white lines when fully running, unless we are stopped for about 5-15mins…then it will go up another line but hasn’t been more than that. This is a 2010 Dodge Grand Caravan SE 3.3L 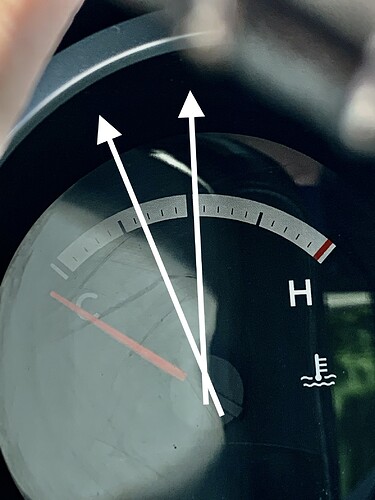 This is completely normal. My 3.8 Towna and Country’s and Caravans normally run well above 200 degrees.

Your gauge is telling you the vehicle is Ok and you are not puking coolant so you have no real problem, you just think you do. Drive on, be happy and don’t worry until the gauge hits the H.

What year and how many miles. I don’t know if the fluctuation is normal for that car, but if a thermostat is cheap I would consider replacing it.

Your thermostat is supposed to keep your engine at the same tepm no matter what the outside temp. Every Chrysler product I have owned, and there were many, kept the temp gauge of a fully warmed up engine at just a little over 1/2 way.

Toyota apparently does not want me to worry about it because there is no temp gauge in my 2012 Camry but what I thought was one is an average gas mileage gauge. I have 3 different readouts that provide my gas mileage/

The thermostat maintains the engine temperature to be at least 195 F. Radiator cooling fans generally are not switched on until 220 F or 230 F at speeds above 30 mph so you will see some fluctuation in temperature.

at speeds above 30 mph so you will see some fluctuation in temperature.

At speeds abouve 30 MPH the radiator fan wouldn’t be needed!